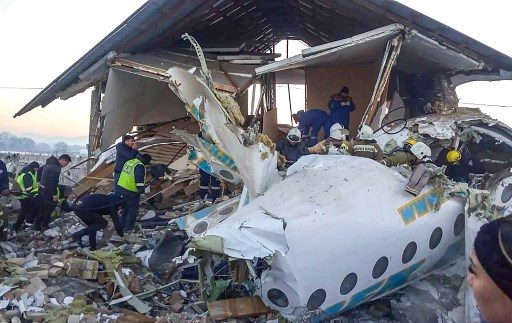 Facebook Twitter Copy URL
Copied
Kazakhstan responds to the crash by grounding the model, which makes up the whole of the Bek Air fleet, and launching an investigation

ALMATY, Kazakhstan – Twelve people died and dozens were injured on Friday, December 27, when a passenger plane carrying 100 people crashed shortly after takeoff from Kazakhstan’s largest city and slammed into a house, officials said.

A video released by the Central Asian country’s emergencies committee showed the plane operated by budget carrier Bek Air split into pieces with its nose crushed into a partially collapsed house, as rescue crews worked to pull people from the wreckage.

Rescue workers could be seen reaching into the windows of the shattered cockpit, as scores of emergency staff rushed to the site.

The plane disappeared from the radar minutes after it took off from Almaty airport at 7:05 am (01:05 GMT) on its way to the capital Nur-Sultan with 95 passengers and 5 crew members, the airport authority said in a statement.

It hit a concrete barrier and then slammed into a two-story building near the city’s boundary northeast of the airport.

Kazakhstan responded to the crash by grounding the model, which makes up the whole of the Bek Air fleet, and launched an investigation.

The country’s emergencies committee released a list of 12 people who died, including the captain, revising down earlier tolls provided by officials and media.

Eight of the victims died at the scene of the disaster, two while receiving medical attention at the airport and two in hospital.

The health ministry said 53 people had been injured, 9 of whom were children, adding that 10 adults were in critical condition.

Deputy Prime Minister Roman Sklyar said the tail of the 23-year-old had touched the runway twice during takeoff.

“Either this is a pilot error, or there were technical reasons,” Sklyar said at a press conference in Almaty.

No one was inside the house that the plane crashed into, Khabar state television reported.

Those responsible ‘will be punished’

President Kassym-Jomart Tokayev pledged to provide families of the victims with compensation and tweeted that those responsible “will be severely punished in accordance with the law.”

Tokayev also said a government commission had been set up to investigate the circumstances surrounding the tragedy.

The interior ministry said it had also launched a criminal investigation into the incident over violations of air transport safety rules.

The plane was 23 years old and had passed safety checks in May, Kazakh authorities said.

The industry ministry said in a statement that the Fokker 100 model, which is no longer manufactured, would be grounded until the cause of the accident became clear.

Bek Air describes itself on its website as Kazakhstan’s first low-cost airline.

In March 2016, a Bek Air Fokker 100 plane with 116 passengers made an emergency landing at the capital’s international airport after its landing gear failed to deploy. None of the passengers or 5-member crew were injured.

Informburo.kz news agency said one of its journalists, Dana Kruglova, was among the dead.

“(Her) trip had been uncertain, since she had work meetings planned in Almaty. But Dana wanted to celebrate the New Year with her parents in Nur-Sultan and decided to take this flight,” the news agency said. – Rappler.com