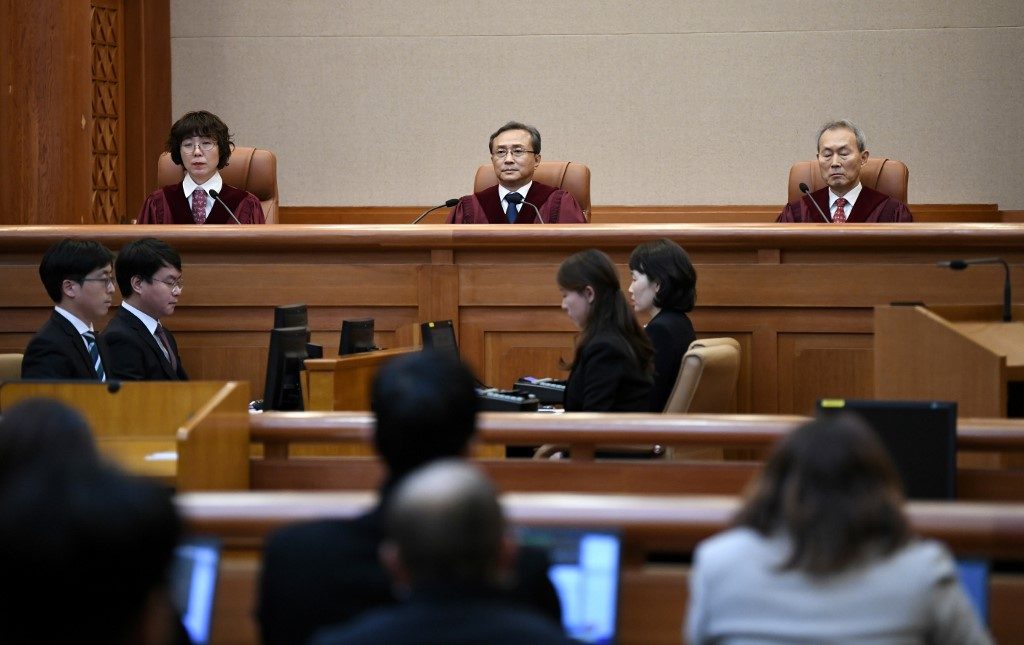 Facebook Twitter Copy URL
Copied
In a unanimous decision, the Constitutional Court said 'it is difficult to conclude that it is possible for the deal to violate the victims' basic rights'

SEOUL, South Korea – South Korea’s Constitutional Court dismissed Friday, December 27, an appeal by survivors of wartime sexual slavery over a controversial deal between Seoul and Tokyo, as the two nations sought to mend ties in the face of mounting threats from Pyongyang.

Japan and South Korea – both key US allies and democracies – have long been locked in a bitter row over historical issues that have spiralled into a fully-fledged trade dispute.

A 2015 deal with Tokyo under Seoul’s then leader Park Geun-hye established an $8.8 million fund for “comfort women” – those forced to provide sex for Japanese troops during World War II – but a 2016 petition by survivors and their families claimed the agreement was unjust.

On Friday in a unanimous decision, the Constitutional Court said “it is difficult to conclude that it is possible for the deal to violate the victims’ basic rights.”

The Court said the 2015 deal was a “political agreement” and therefore surrounding discussions also belong to the political arena.

The appeal, from 29 survivors and 12 family members, claimed the Park administration didn’t consult with them before signing the 2015 agreement – at the time the two governments agreed it was “final and irreversible” – and that it violates their own individual right to demand compensation.

Earlier this year Seoul and Tokyo’s relationship was damaged by South Korean courts ruling that Japanese firms that used forced labour decades ago must compensate victims.

It later sparked a simmering trade row between the two, with South Korea threatening to scrap a critical military intelligence pact with Tokyo until the idea was abandoned last month.

South Korean President Moon Jae-in, who has repeatedly condemned the 2015 agreement as a “wrongful” solution, has sought to dial down the temperature in the face of threats from the nuclear-armed North and pressure from Seoul’s key security ally Washington.

On Tuesday during his bilateral meeting with Japan’s Shinzo Abe in China, in a dramatic shift in rhetoric, he described the nations as “the closest neighbors geographically, historically and culturally”.

The meeting took place with the clock ticking on a threatened “Christmas gift” from Pyongyang that could reignite global tensions over its nuclear programme.

The North has carried out a series of static tests at its Sohae rocket facility this month, after a number of weapons launches in recent weeks, some of them described as ballistic missiles by Japan and others – which Pyongyang is banned from testing under UN sanctions. – Rappler.com