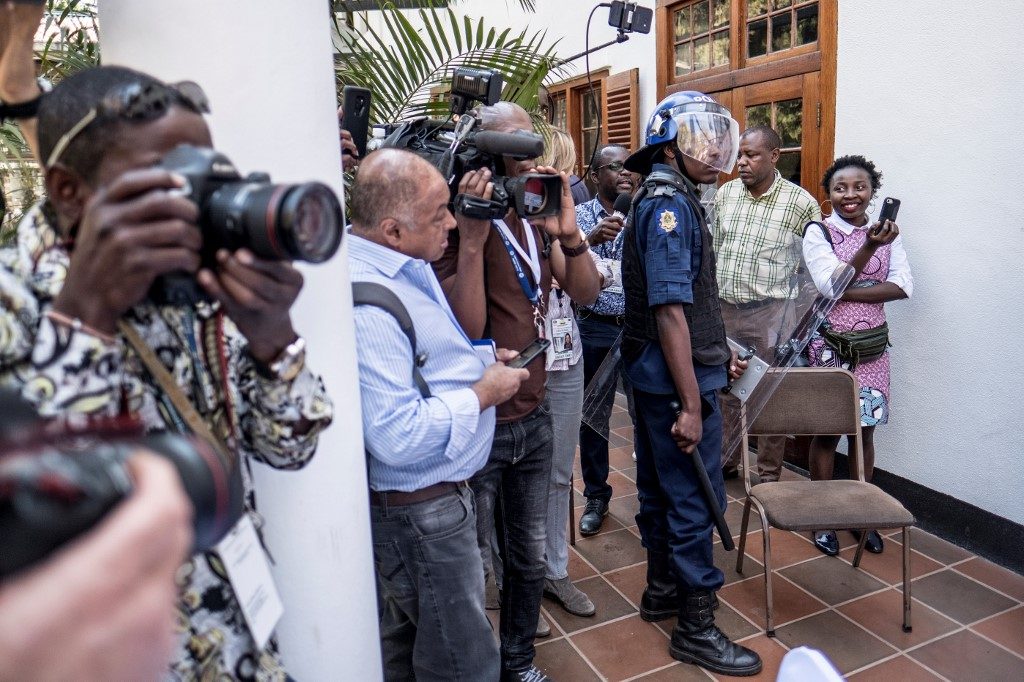 HARARE, Zimbabwe – Fanuel Mapfumo has been unable to lift heavy objects since a Zimbabwe police officer fractured his left arm as he was covering a story last August.

The 28-year-old journalist was filming a banned protest in the capital Harare when it happened.

Opposition supporters were voicing their discontent with the country’s ailing economy when police descended on the crowd with batons. (READ: Zimbabwe quadruples electricity price as crisis deepens)

Mapfumo, who works for the Zim Morning Post, said they ordered him to stop filming.

“I identified myself as a journalist,” he told AFP.

“But the next thing I remember is being dragged into a group of police officers who beat me all over my body.”

In August last year, 6 people died after the army used force against civilians protesting a delay in the announcement of election results.

And as Mnangagwa has tightened his stance on dissent, journalists have also suffered repercussions.

“We documented 18 cases of abuse of members of the media this year,” said Tabani Moyo, who heads the Media Institute of Southern Africa (MISA) – up from only one case in 2018.

Most of the incidents involved police officers, he added.

The rise of attacks on journalists has brought back memories of the regime under former president Robert Mugabe, whose increasingly despotic rule cracked down on the independent media.

Mugabe was toppled by a military putsch in 2017 after 37 years in power, which led some of the country’s embattled media professionals to hope for better days.

That optimism was short-lived, however.

Costa Nkomo, 30, was injured by police officers in January while reporting on a skirmish with unlicensed street vendors in downtown Harare.

“A policeman to whom I identified myself as a journalist beat me up,” said Nkomo, who was filming for a local news site named 263Chat.

Three months later, baton-wielding policemen chased one of Nkomo’s colleagues into the 263Chat offices for filming a similar incident.

“We managed to push them out of the office,” said Nkomo, who took refuge on the balcony with a dozen fellow reporters.

“They retaliated by firing a tear gas canister into the office and locking the door from outside.”

That incident caused outrage, prompting the government to promise an investigation.

“Our constitution guarantees freedom of the media and government respects the constitution,” tweeted the information ministry after the incident.

Government spokesman Nick Mangwana told AFP the information ministry had “engaged the police over the issue of safety for journalists”.

But he also said police had raised concerns about journalists “causing mayhem” by failing to respect safe distances without clearly identifying themselves.

But the press cards issued by the government to allow reporters to do their job do not always guarantee protection.

In August, journalist Leopold Munhende was arrested alongside a group of rural teachers demonstrating for better pay.

“A policeman grabbed me by the belt and ordered me to join the teachers,” said Munhende, who was detained for seven hours.

“I produced my accreditation card, but he wasn’t interested.”

Munhende said an officer told him that he needed permission from the police to cover the demonstration.

“It’s that kind of ignorance of the law that is disturbing,” he added.

Munhende never reported the incident: he did not trust the police to investigate their own, he said.

‘All kinds of excuses’

“Any journalist who is abused by the police should report the matter,” said police spokesman Paul Nyathi, adding that perpetrators “should be brought to book”.

Nyathi blamed police mistreatment of journalists who had identified themselves on “operational difficulties”.

He added that “so-called freelance journalists” made it difficult for the police to relate to the media.

But Moyo at MISA, which along with other groups has organised several meetings with police officers, complained about the lack of cooperation.

“The police will make all kinds of excuses, even when [there is] video or picture evidence,” he told AFP.

“They will move the complainant from pillar to post, saying they are trying to locate the implicated officer.

“They pretend to be ignorant and incompetent when it suits them,” he added.

Mapfumo meanwhile has taken matters into his own hands and is now suing the police commissioner general. – Rappler.com