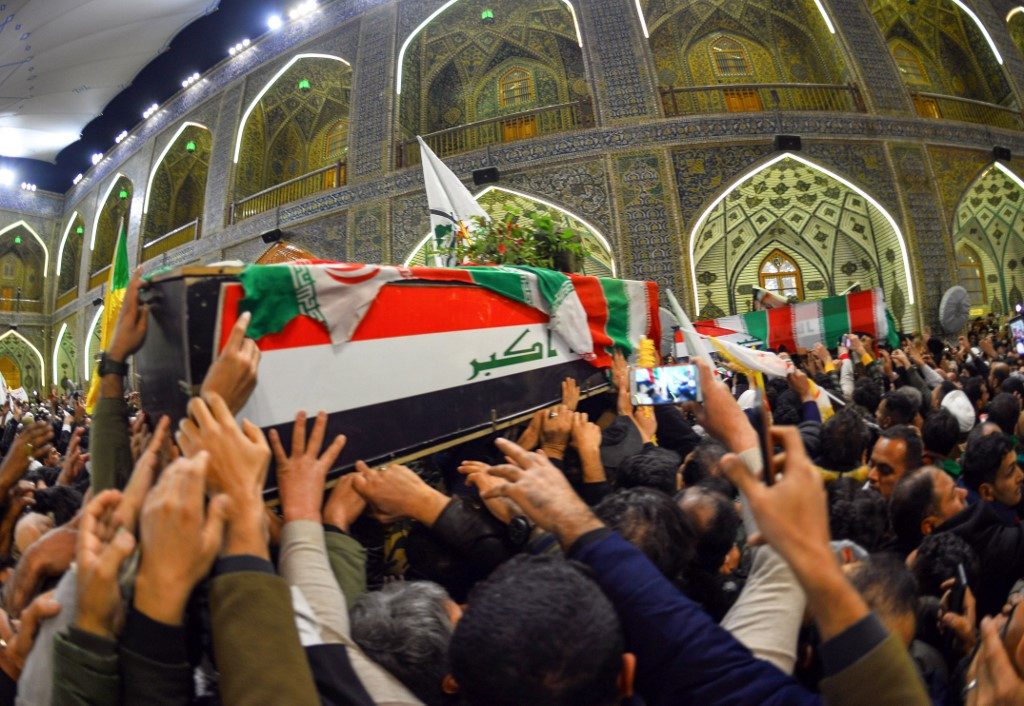 BAGHDAD, Iraq – Tens of thousands of Iraqis, many chanting “Death to America,” Saturday, January 4, mourned a top Iranian commander and others killed in a United States drone attack that sparked fears of a regional proxy war between Washington and Tehran.

The killing of Iran’s Major General Qasem Soleimani on Friday, January 3, was the most dramatic escalation yet in spiralling tensions between Iran and the US, which pledged to send thousands more troops to the region. (READ: Trump says US targeting 52 sites in Iran, as tension mounts)

US President Donald Trump said he had decided to “terminate” Iran’s military mastermind to prevent an “imminent” attack on US diplomats and troops.

“We took action last night to stop a war,” he insisted. “We did not take action to start a war.”

But a furious Iran has vowed revenge for the killing of Soleimani, the chief architect of its military operations across the Middle East.

“By whom, by when, where? That is for the future to witness.”

In the hours after the strike, the US reached out to Iran, with which it has had no direct diplomatic ties for decades.

Switzerland, whose embassy in Tehran represents US interests, confirmed Saturday its charge d’affaires had on Friday been “informed of Iran’s position and in turn delivered the message of the United States.”

Zarif also spoke with his Chinese counterpart Wang Yi, who argued that “the dangerous US military operation violates the basic norms of international relations and will aggravate regional tensions and turbulence,” according to Chinese media.

The strike killed a total of 5 Iranian Guards and 5 members of Iraq’s Hashed al-Shaabi paramilitary network, whose members have close ties to Tehran.

Among the dead was the Hashed’s deputy Abu Mahdi al-Muhandis, who was a top adviser and personal friend to Soleimani.

They were first brought to a revered Shiite shrine in northern Baghdad, where thousands of mourners chanted “Death to America!”

Dressed in black, they waved white Hashed flags and massive portraits of Iranian and Iraqi leaders, furiously calling for “revenge.”

The remains were then moved to the shrine city of Karbala and would ultimately end up in Najaf, where the Iraqis will be buried.  (READ: Iran top general to be laid to rest on January 7 in hometown)

The Guards’ remains would be flown to Iran, which has declared three days of mourning and religious rituals.

He had long been considered a lethal foe by Washington, with Trump saying he should have been killed “many years ago”.

Iraqis worry the US strike could unleash a new wave of destabilization for Iraq, which only two years ago announced it had defeated the Islamic State group.

Abdel Mahdi warned Friday it would “spark a devastating war in Iraq,” while President Barham Saleh pleaded for “voices of reason” to prevail.

On Saturday, the Hashed said a new strike had hit a convoy of their forces north of Baghdad, with Iraqi state media blaming the US.

Amid the tensions, the Pentagon said up to 3,500 additional US troops would be dispatched to Iraq’s neighbour Kuwait, to boost some 14,000 reinforcements already deployed to the region last year.

About 5,200 US troops are stationed across Iraq to help fight IS.

They have faced a spate of rocket attacks that the US has blamed on pro-Iran factions and which last month killed an American contractor.

As a result of the tensions, NATO said it was suspending its training activities in Iraq and a US defence official told AFP that American-led coalition forces would “limit” operations.

“Our first priority is protecting coalition personnel,” the official said, adding that the main focus of surveillance had shifted from the Islamic State to watching for incoming rocket attacks.

Iraq’s defence ministry had not been informed of the changes, its spokesman told AFP on Saturday.

US citizens were meanwhile urged to leave Iraq immediately and American staff were evacuated from oil fields in the south.

Iraq’s pro-Iran factions have seized on Soleimani’s death to push parliament, which convenes Sunday, January 5, to revoke the security agreement allowing US forces on Iraqi soil.

While praying over Muhandis’s remains in Baghdad, top Hashed official Hadi al-Ameri pledged to avenge him by ousting US troops.

“Be reassured that the price of your pure blood will be the departure of American troops from Iraq, forever,” he said. – Rappler.com