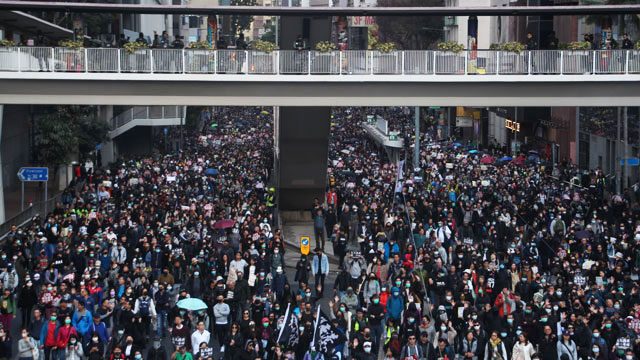 Facebook Twitter Copy URL
Copied
The very fact that the protests are still ongoing suggests an acceptance by the populace. Yet, Carrie Lam and the Hong Kong government hold most of the cards in finding real practical solutions, much to Hongkongers' frustration

HONG KONG – The beginning of the new decade has picked up where it left off in Hong Kong, as the social unrest is set to continue in 2020.

There was a recess from major clashes at the end of November, but Christmas time teased a return. On January 1, over one million protesters took to the streets that saw the returning scenes of teargas, barricades, and multiple arrests. Despite 2019 being a year filled with protests across six continents, Hong Kong’s march for further freedoms resonated the most globally.

The rallies against the Hong Kong government ultimately led to violent clashes between protesters and police. Controversial incidents happened on both sides, but denunciations of police brutality – among the Hong Kong protesters’ main five demands – was the one that echoed loudly around the world.

Hongkongers are happy for the support from the world’s biggest superpower but are skeptical about how productive the Act will be. The US will have a lot on its plate this year such as Iran and North Korea. It remains to be seen whether further support can be spared for Hong Kong.

Over 1.03 million people turned out during a demonstration organised by the Civil Right Front on January 1. More than 400 arrests were reported that day, bringing the total arrests to over 7,000 since last June. The trials of those charged with more serious offenses will ultimately be decided this year, with numerous prison sentences expected.

In a landslide victory in November 2019, the District Elections saw 17 out of 18 councilors take pro-democracy seats. Viewed as a de-facto referendum, the overwhelming defeat of pro-establishment voters to pro-democracy supporters raises expectations as to how Hong Kong’s democratic aspirations will be heard in 2020.

Collectively, the newly appointed councilors will be judged on their efforts during the Legislature Council (LegCo) elections. The District Elections result was a major rebuke to the government, yet there will be a fierce battle for the pro-establishment loyalists to defend their majority. Undoubtedly, there will be protests, clashes, rumors, and controversies leading up to the elections in September. Chris Tang Ping-keung, Hong Kong’s recently appointed new police chief, will see his first full year in charge. His main goal will be to bridge the distrust between locals and his controversial police force while assessing new strategies to deal with the ongoing unrest. Separating hardliners from the rest of the protests as well as canceling permits midway – seen during a New Years’ Day march –  could be two of several new tactics the police are adopting. The handling of journalists reporting on the protests came under scrutiny during the second half of 2019. The Hong Kong Journalist Association said it received a high number of complaints about the Hong Kong Police.

Journalists endured rubber bullets, pepper spray, teargas, and arrests that show no sign of abating. It is predicted that we will see more attempts for justice as the year develops. Among the publicized cases was that of Indonesian video journalist Veby Mega Indah who was blinded in one eye from a rubber bullet fired by riot police. Her legal team is pushing for private prosecution of the officer who shot her. Her case will be one to follow as 2020 unfolds. 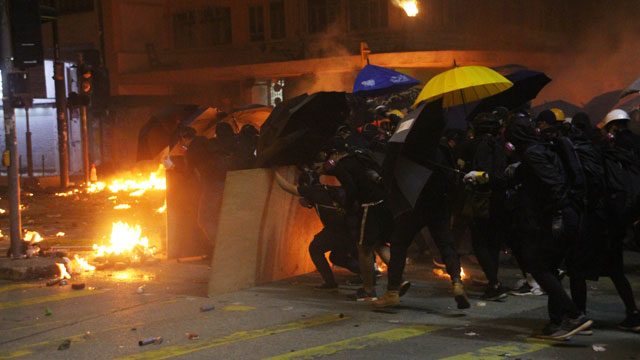 On the back of the unwavering support from Hongkongers in the District Elections, the public has seemingly endorsed the pro-democracy movement unanimously.

Despite the relentless cat-and-mouse with the Hong Kong Police force, the fact that the protests are still ongoing suggests an acceptance by the populace. Add in the eventual removal of the extradition bill and the support from the US, Hong Kong is in a better position than one could have thought when this began last June.

Yet, Carrie Lam and the Hong Kong government hold most of the cards in finding real practical solutions, much to Hongkongers’ frustration. With over one million protesters out in the streets on January 1, Hong Kong’s 2019 hangover rumbles on at the beginning of the new decade. – Rappler.com