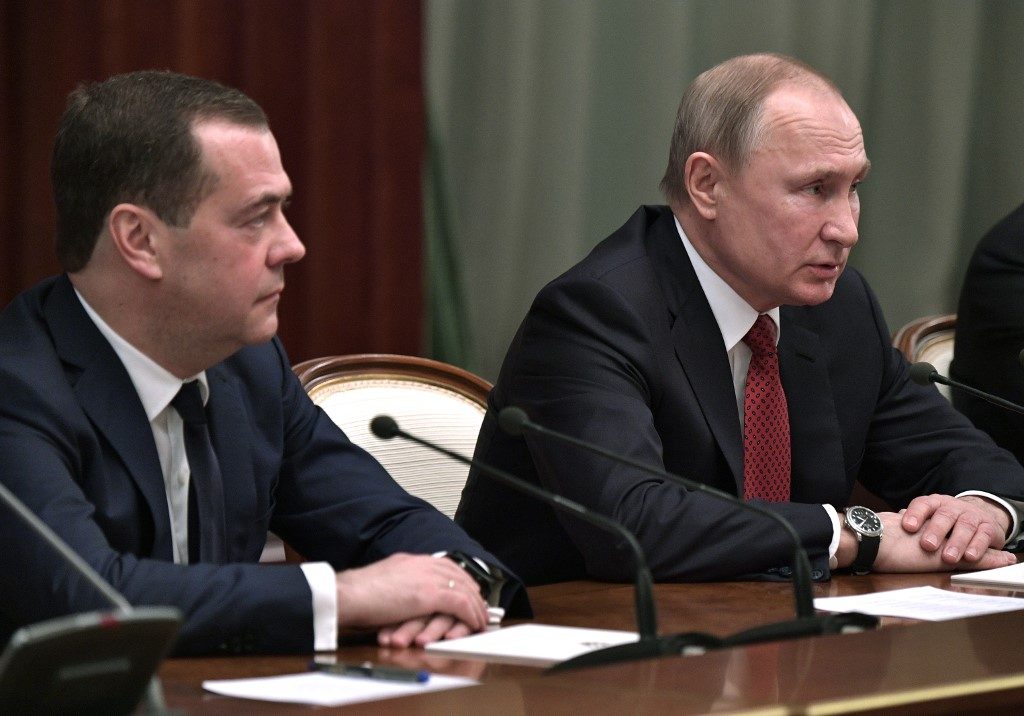 MOSCOW, Russia – President Vladimir Putin moved quickly on Monday, January 20 to push through an overhaul of Russia’s political system that has fuelled speculation over his ambitions after his term expires.

Less than a week after announcing the reforms that unleashed a political storm in Russia, Putin submitted the package of constitutional amendments to lawmakers.

The bill proposes changes that transfer some powers from the president to parliament and the State Council.

But according to the amendments submitted to parliament, the president also receives additional powers.

The overhaul would also transform the State Council from an advisory body to an institution – potentially headed by Putin – that would shape domestic and foreign policy as well as social and economic development, according to the amendments.

It will be formed by the president.

Putin, who first became president 20 years ago, announced the proposed changes in a state of the nation address last Wednesday, prompting the government of his loyal lieutenant Dmitry Medvedev to resign.

The reforms include giving parliament the power to name the prime minister and limit the president to only two terms in total, instead of two successive terms.

Critics have accused Putin, 67, of orchestrating a “constitutional coup” and seeking to fast-track changes to the country’s political system without going through proper procedures including a referendum.

The State Duma’s legislative committee is to discuss the package on Tuesday, and the lower house will decide Wednesday when to debate the amendments, speaker Vyacheslav Volodin said.

Volodin billed the amendments as a “historic” decision by Putin – whose fourth term in the Kremlin expires in 2024 – to share some of his powers with political parties and civil society.

Senior lawmaker Pavel Krasheninnikov said the second reading of the bill was expected in February.

The draft was presented just days after a group of experts and popular figures was set up to develop the proposals and before a public vote on the amendments that Putin promised last week.

“No one expected such a rush with regard to the amendments,” said the Bell, an independent news website.

“The changes to the Russian state system are taking place with unprecedented speed.

As part of the shake-up among top officials, Putin also on Monday removed the powerful Prosecutor General Yury Chaika – who took office in 2006 – and nominated a replacement.

Top Kremlin critic Alexei Navalny accused Putin of wanting to remain “leader for life” and said the opposition would come out with a counter-plan in the coming weeks.

“No one knows what the heck Putin is going to pull off to remain in power forever,” Navalny said on Monday.

“I am absolutely sure that Putin, too, does not fully understand what he is doing.”

Navalny’s ally Ilya Yashin said he and other opposition leaders wanted to stage a major rally against Putin’s plans on February 29.

“It will probably be the most important opposition rally in recent years,” he said on Facebook.

Navalny has emerged as the leader of the Russian opposition, mustering huge protests in 2011-12 after Putin announced he would return to the presidency following 4 years as prime minister.

Those protests were put down but tens of thousands of people again took to the streets of Moscow last summer to protest the exclusion of opposition candidates from local elections.

Those rallies also led to wide-scale arrests and long jail terms for a number of demonstrators.

In the elections for Moscow parliament last September, the ruling party lost almost a third of its seats after Navalny instructed his supporters to vote strategically – a tactic he could employ again next year when Russia is due to hold parliamentary elections. – Rappler.com