Masses suspended in Singapore, Hong Kong due to coronavirus 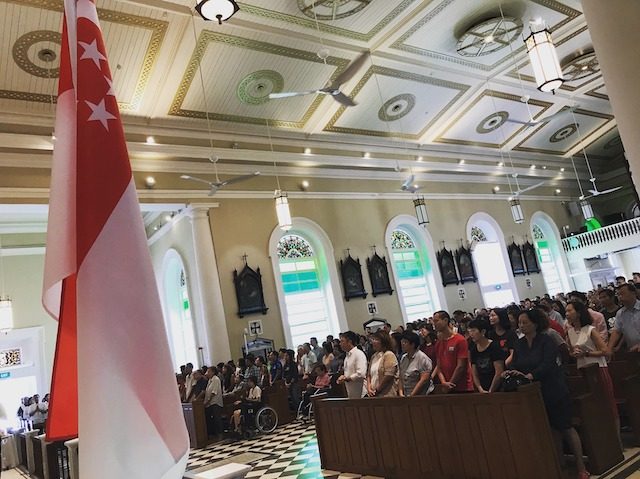 Facebook Twitter Copy URL
Copied
'As Catholics, we need to be responsible in playing our part to contain the spread of this virus,' says Singapore Archbishop William Goh

SINGAPORE – The Catholic Church in Singapore and Hong Kong suspended public Masses starting Saturday, February 15, to stop the spread of the novel coronavirus that has infected more than 60,000 people and killed over a thousand, mostly in China.

The Catholic Archdiocese of Singapore announced on Friday night, February 14, that all public Masses on weekdays and weekends “will be suspended indefinitely with effect on Saturday, 15 February, 12 pm, until there is greater clarity on the way forward.”

The same suspension applies to all other public events gathering large numbers of people, such as retreats, seminars, and formation sessions.

The Catholic Diocese of Hong Kong in a separate announcement on Thursday, February 13, said it was suspending public Masses from February 15 to 28. The suspension covers Masses on Ash Wednesday, the start of the Catholic penitential season of Lent, on February 26.

The Catholic Church said that this is because, as the Hong Kong government stressed, “the coming two weeks are crucial for combatting the viral outbreak.”

The World Health Organization said in its latest update on Friday that the novel coronavirus disease (COVID-19) has infected at least 58 people in Singapore and 53 in Hong Kong. Singapore has the highest number of COVID-2019 infections outside mainland China and its territories Hong Kong and Macau.

Hong Kong reported its first COVID-19 death on February 4, making it the second place outside mainland China to report the death of a novel coronavirus patient.

Singapore authorities earlier traced at least 18 of its 58 novel coronavirus cases to two non-Catholic churches in Singapore. The Ministry of Health said 5 cases can be linked to the Life Church and Missions on Paya Lebar Road, while 13 others have been associated to Grace Assembly of God on Tanglin Road.

‘We need to be responsible’

Singapore’s health and culture ministers had met with the country’s church leaders on Friday, and had told them “that worship services may continue, but with appropriate precautionary measures.” The Archdiocese of Singapore however was not taking any chances.

“As Catholics, we need to be responsible in playing our part to contain the spread of this virus by avoiding large gatherings of people,” Goh said.

The Diocese of Hong Kong said in its own statement, “The Church, being a member of society, has the duty to maintain public hygiene and promote the common good.”

Goh said that “the cancellation of Masses does not mean that Catholics can excuse themselves from fulfilling the obligation of keeping the Day of the Lord holy,” as “they should try to follow the broadcast of the Mass on YouTube or Catholic SG Radio,” a Catholic app in Singapore. He said Catholics can also read the Bible more and pray that the novel coronavirus would be eradicated.

Thousands of Filipinos pack Catholic churches in Singapore and Hong Kong each Sunday. Around 200,000 Filipinos work in Singapore according to the Philippine embassy here, while national government statistics show around 144,000 others work in Hong Kong.