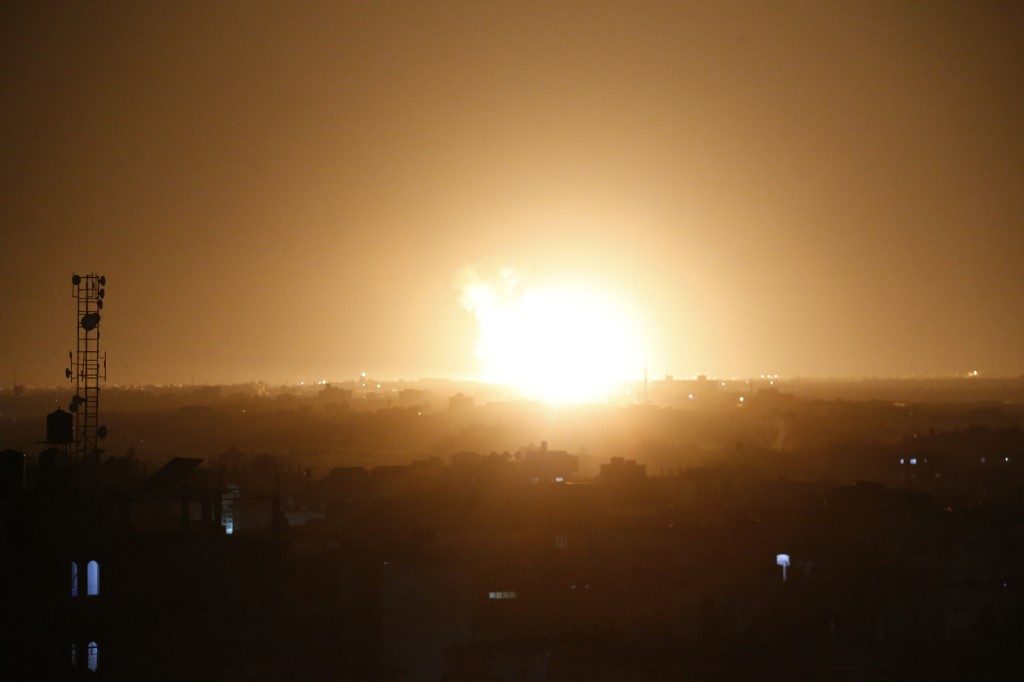 JERUSALEM – Israeli aircraft hit what the military said were Islamic Jihad sites in the Gaza Strip and Syria late Sunday, February 23, after the Palestinian militant group fired a barrage of rockets at Israel.

In a new flareup a week ahead of fresh general elections in the Jewish state, the Israeli Air Force carried out strikes on “Islamic Jihad terror sites” throughout Gaza and near the Syrian capital Damascus, a military statement said.

There were no immediate reports of fatalities in either Gaza, which lies to the west of Israel, or Syria, which is to the country’s north.

Islamic Jihad, which along with allied group Hamas has fought 3 wars with Israel in Gaza since 2008, operates in both territories.

The Israeli military said it had struck “dozens” of Islamic Jihad targets throughout Gaza.

“A hit was identified,” it added, with health officials in Gaza saying 4 people were wounded in the strikes.

In Syria, the Israeli army said it had struck Islamic Jihad targets outside the capital Damascus, including a base “used as a hub” for the group’s activities in the country.

The Syrian Observatory for Human Rights said the attacks were “near the Damascus international airport.”

The Syrian state news agency Sana said “most of the enemy missiles were shot down before reaching their targets,” stressing that “no airport” was struck.

Earlier Sunday, more than 20 rockets and mortars were launched from Gaza towards Israel, setting off warning sirens in the southern city of Ashkelon and several other locations, the army said.

More than a dozen were intercepted by the Jewish state’s Iron Dome missile defense system, the Israeli army said.

There were no reports of serious injuries.

Islamic Jihad claimed responsibility for the rockets, calling them a response to the killing of one its fighters along the Gaza border early Sunday.

Israel said the man had been part of a cell seeking to plant an explosive device on the border fence.

Islamic Jihad identified the dead man as Mohammed al-Naem, 27, a member of its armed wing.

A video later emerged on social media showing a bulldozer approaching a body while a group of young, apparently unarmed men, were trying to retrieve it.

The sound of gunfire is heard and the men ultimately run away as the bulldozer scoops up the body.

A tank can be seen positioned nearby.

Israel’s hawkish Defense Minister Naftali Bennett has pursued a policy of retaining the bodies of militants from Gaza as bargaining chips to pressure Hamas, which has held the bodies of two Israeli soldiers since 2014.

Hamas is also believed to be detaining two Israeli citizens who entered Gaza separately and whose families say suffer from mental illness.

Israel has a general election on March 2, its third in less than a year after deadlocked polls in April and September 2019.

Hamas and Israel last fought a full-scale war in 2014 but smaller flareups are relatively common.

In November, Islamic Jihad and Israel fought a three-day conflict that left 35 Palestinians dead and more than 100 wounded, according to official figures.

There were no Israeli fatalities.

Under the informal agreements in the past year, Israel has slightly eased a blockade of the impoverished Palestinian enclave in exchange for relative calm. – Rappler.com