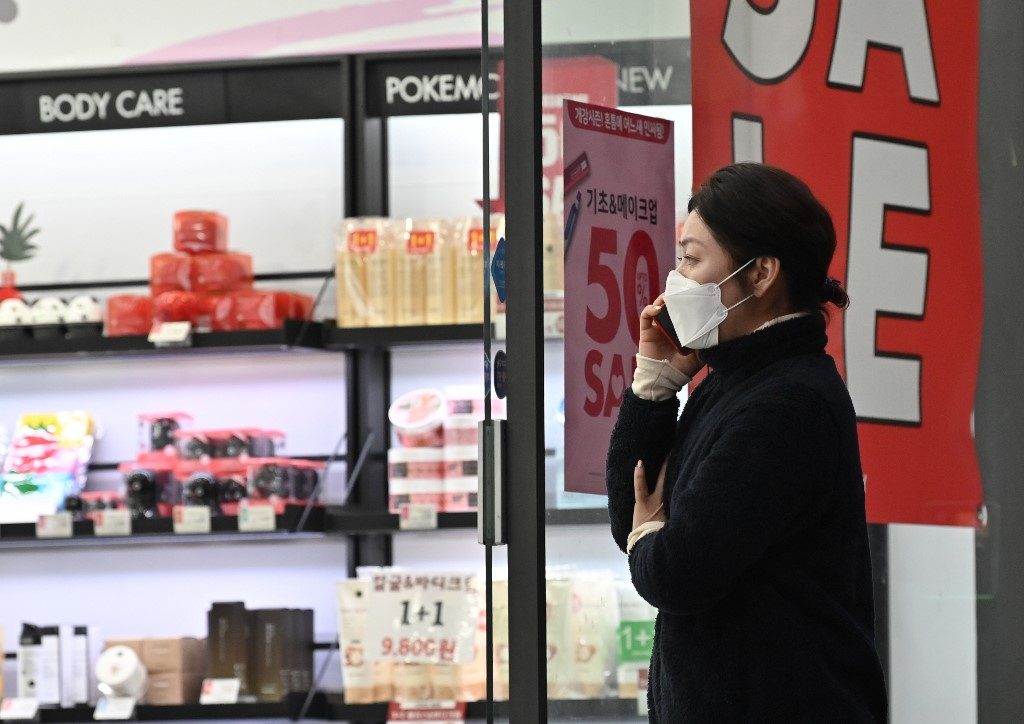 The Korea Centers for Disease Control and Prevention (KCDC) confirmed 144 new infections, taking the tally to 977, the largest national total anywhere outside China, where the virus first emerged.

Scores of events have been cancelled or postponed as the outbreak has spread in the world’s 12th-largest economy, from K-pop concerts to the start of the K-league football season, with casualties on Tuesday including parliamentary sessions and the World Team Table Tennis championships.

More than 80% of the infections have been in South Korea’s fourth-largest city Daegu and neighboring North Gyeongsang province.

“The situation is very grave,” President Moon Jae-in said on a visit to Daegu, wearing the uniform of a government emergency official and vowing full government support. (READ: Virus ‘peaked’ in China but could trigger global pandemic – WHO)

“We will achieve a victory in the fight against this virus,” he added.

The streets of Daegu – which has a population of 2.5 million – have been largely deserted for days, apart from long queues at the few shops with masks for sale.

Authorities urged the public to exercise extra caution, advising citizens to stay home if they have a fever or respiratory symptoms. (READ: Coronavirus forces BTS to stream album press conference from empty hall)

South Korea’s parliament cancelled sessions Tuesday as it closed for cleaning after confirmation a person with the coronavirus had attended a meeting last week.

The staffer may have been infected by a group of South Korean pilgrims who flew to Israel, reports said, adding that the attendant subsequently flew from Incheon to Los Angeles and back last week.

And the US hinted at scaling back joint military exercises, with Defense Secretary Mark Esper telling reporters in Washington the two allies’ militaries were “looking at scaling back the command post training due to concerns about the coronavirus.”

The US Centers for Disease Control and Prevention advised travelers to “avoid all nonessential travel” to South Korea.

Hong Kong has said it will not allow arrivals from South Korea other than returning residents, while a Mongolian ban on flights to and from the South came into force Tuesday.

Organisers of the World Team Table Tennis championship, due to be held in Busan in March, said new dates in June had been “provisionally reserved.”

The Korean Basketball League said it would hold matches behind closed doors “until the situation improves.”

Three more people had died, the KCDC said, taking the toll to 10. But the case numbers it announced represented the smallest daily increase for 4 days.

South Korea has an advanced medical system, a free press and a strong culture of public accountability, and observers say that its health statistics can be treated with confidence.

Most of the country’s infections are linked to the Shincheonji Church of Jesus, an entity often accused of being a cult.

A 61-year-old female member developed a fever on February 10, but attended at least 4 church services in Daegu before being diagnosed.

KCDC director Jung Eun-kyeong advised Shincheonji followers to refrain from going outside “as much as possible.”

With public criticism growing, Shincheonji’s founder Lee Man-hee said the group would provide the government a list of all its members to have them tested for the virus. – Rappler.com