Curfew call in New Delhi after 20 die in sectarian clashes 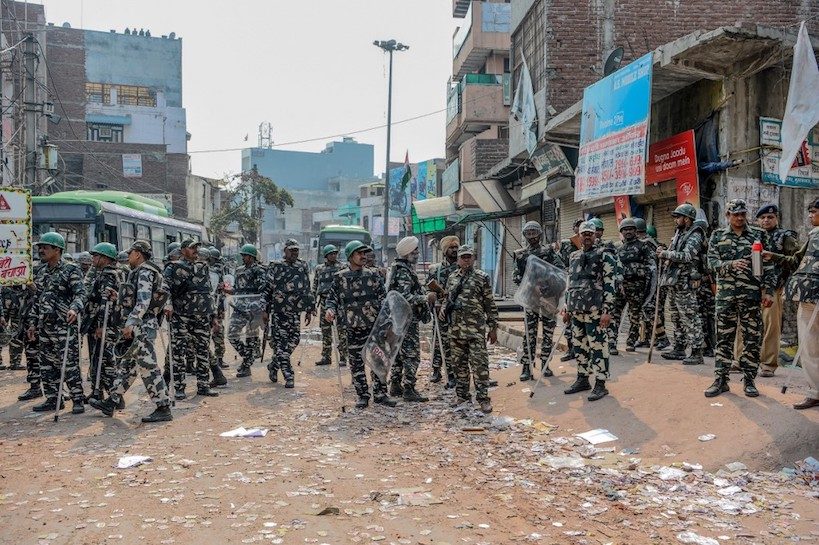 Facebook Twitter Copy URL
Copied
The two days of unrest, which has seen clashes between mobs armed with swords and guns, is the worst sectarian violence seen in Delhi in decades

NEW DELHI, India – Riot police patrolled the streets of India’s capital on Wednesday, February 26, and the city’s leader called for a curfew following battles between Hindus and Muslims that claimed at least 20 lives.

The two days of unrest – which has seen clashes between mobs armed with swords and guns – is the worst sectarian violence seen in Delhi in decades.

Delhi’s chief minister, Arvind Kejriwal, called Wednesday for the army to be deployed and for a curfew to be imposed over flashpoint northeastern districts.

“Police, despite all its efforts, (are) unable to control situation and instil confidence,” Kejriwal tweeted on Wednesday morning.

“Army (should) be called in and curfew imposed.”

The clashes began on Monday, February 24, between people supporting and opposing the citizenship law, then descended into pitched battles between the mobs.

Twenty people died and nearly 200 others were wounded in the first two days of violence, the director of the hospital where people were taken, told AFP on Wednesday.

Sixty people had suffered gunshot wounds, according to the director, Sunil Kumar.

The area is home to mostly poorer economic migrants living in many shanty neighbourhoods, and some fled on Wednesday ahead of more expected clashes.

“People are killing (each other). Bullets are being fired here,” a tailor in the Jaffrabad area told AFP, adding that he was returning home to his village in northern Uttar Pradesh state.

“There is no work… It is better to leave than to stick around here. Why would we want to die here?”

On Wednesday morning AFP saw people cleaning out the blackened and trashed interior of a mosque in the Ashok Nagar area burned out during the violence.

A video circulated on social media and verified by AFP showed men ripping off the muezzin’s loudspeaker on top of the mosque’s minaret and placing a Hindu religious flag and an Indian flag.

The new citizenship law has raised worries abroad that Modi wants to remould secular India into a Hindu nation while marginalizing the country’s 200 million Muslims, a claim he denies.

The law expedites the citizenship applications for persecuted minorities from India’s 3 Muslim-majority neighboring countries, but not if they are Muslim.

The flare-up in violence occurred as US President Donald Trump visited India and held talks with Modi in Delhi on Tuesday.

But Trump left as scheduled on Tuesday and his visit was not visibly interrupted by the violence. – Rappler.com