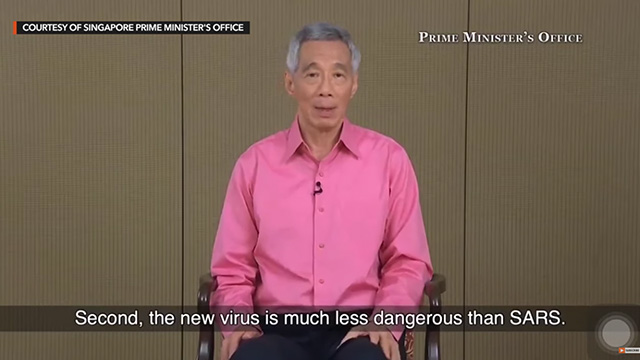 “To show solidarity at this trying time, political office holders will be taking a one-month pay cut, while MPs (members of parliament) will take a one-month cut in their allowance. I am heartened that President Halimah Yacob is also joining in this gesture,” Lee announced on Friday, February 28.

The Straits Times reported that Lee was among those who will take a one-month pay cut.

Lee also cited the announcement of Deputy Prime Minister Heng Swee Keat that there will be “a special bonus of up to one month to healthcare officers in restructured hospitals and the Ministry of Health (MOH), Singapore, and some officers in other frontline agencies who have been directly involved.”

Singapore remains on alert for COVID-19, but the number of discharged COVID-19 patients has outpaced the number of hospitalized cases in recent days. The city-state has 98 confirmed cases of the novel coronavirus disease. Of this number, 69 have been discharged from the hospital, while 29 remain hospitalized as of Friday, according to the MOH.

Among those recently discharged was a 41-year-old Filipino permanent resident of Singapore, who left the hospital nearly a week after he was diagnosed with COVID-19.

Experts have attributed Singapore’s progress to the efforts of healthcare workers, the country’s efficient contact tracing measures to uncover links between COVID-19 cases, and support from the government, which has vowed to shoulder all hospital bills of locals and foreigners who contract the disease.

In early February, Lee himself appeared in a televised message to reassure Singaporeans that the government is working to battle COVID-19, and to remind them that “fear can do more harm than the virus itself.”

“Singapore has been able to respond strongly and effectively to COVID-19 because there is strong trust between the people and the government, and the sense that we are all in this together,” Heng said.

“The government can make decisions quickly, and carry them out effectively, because Singaporeans have confidence that those responsible know what they are doing, care about their health and safety, and share their worries and concerns,” the deputy prime minister said.

“We do not hide bad news,” he added. “We do not flinch from doing the right thing. We will go the extra mile to help every one of us come through this together. That is why people comply with stringent quarantine orders, people accept reassurances about masks, people feel safe and carry on with their lives.” – Rappler.com