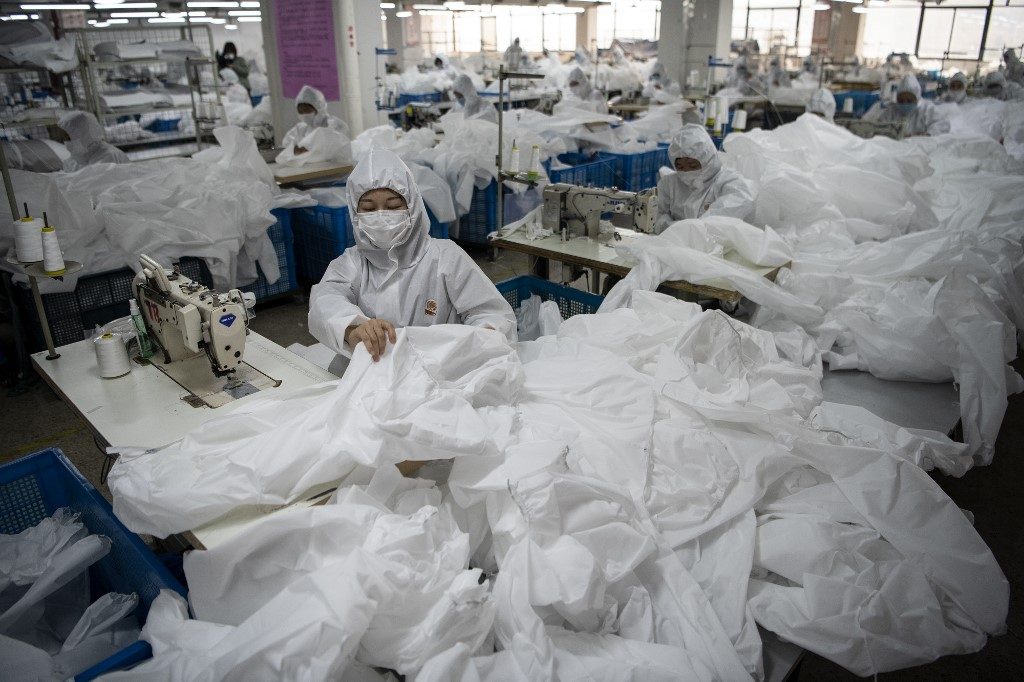 Facebook Twitter Copy URL
Copied
(4th UPDATE) The virus has now infected more than 89,000, spread to over 60 countries and threatens to cause a global economic slowdown

BRUSSELS, Belgium (4th UPDATE)  – The death toll from the new coronavirus epidemic surpassed 3,000 on Monday, March 2, as more people died in China, Iran and the US and Europe raised its state of alert.

The virus has now infected more than 89,000, spread to over 60 countries and threatens to cause a global economic slowdown – after first emerging in China late last year.

With fears of a pandemic on the rise, the World Health Organization urged all countries to stock up on critical care ventilators to treat patients with severe symptoms.

The virus has raised fears for the world economy, with the OECD lowering its global growth forecast by half a point to 2.4 percent, the worst performance since the 2008 crisis.

China’s economy has ground to a halt with large swathes of the country under quarantine or measures to restrict travel. Takings at Macau casinos fell a record 88% in February.

Other countries have started to enact their own draconian containment measures, including banning arrivals from virus-hit nations, locking down towns, urging citizens to stay home and suspending major events such as football matches and trade fairs.

Health officials monitoring the virus at the ECDC announced that it had increased its risk assessment to “moderate to high”.

The Louvre – the world’s most visited museum – closed on Sunday and Monday after staff refused to work because of fears about the virus.

China reported 42 more deaths on Monday – all in central Hubei province. The pathogen is believed to have originated in a market that sold wild animals in Hubei’s capital, Wuhan.

The death toll in China alone rose to 2,912, but it is also surging abroad.

The WHO says the virus appears to particularly hit those over the age of 60 and people already weakened by other illness. It has a mortality rate of between two and five percent.

Infections are now rising faster abroad than in China, as the country’s drastic measures, including quarantining some 56 million people in Hubei since late January, appear to be paying off.

South Korea, the biggest nest of infections outside China, reported nearly 500 new cases on Monday, raising its total past 4,000.

Half of South Korea’s cases are linked to a sect whose leader apologised Monday for the spread of the disease.

Half of South Korea’s cases are linked to a sect whose leader apologized Monday for the spread of the disease.

Seoul’s city government asked prosecutors to press murder charges against him for failing to cooperate in efforts to contain the virus.

A second person died in the northwestern US state of Washington as President Donald Trump, who has downplayed the risk of a major outbreak, faced criticism over his administration’s preparedness.

EU Health Commissioner Stella Kyriakides said: “As of this morning, we have 2,100 confirmed cases in 18 EU member states and we have 38 citizens who have lost their lives.”

After an increase on Sunday, China’s National Health Commission reported 202 new infections on Monday, the lowest daily rise since late January, bringing the nationwide total over 80,000.

In a symbol of the improving situation, authorities in Wuhan closed on Sunday one of 16 makeshift hospitals built or repurposed from public buildings to treat the city’s huge number of patients.

By contrast, Iran reported more than 500 new cases, raising its total number of infections to 1,501.

South Korea’s cases are expected to rise further as authorities test more than 260,000 people associated with the Shincheonji Church of Jesus, the religious group often condemned as a cult that is linked to more than half the infections.

In Italy, Europe’s hardest-hit country, infections nearly doubled to around 1,700 cases over the weekend.

In the United States, a man in his 70s with underlying conditions died on Saturday, health officials said, as New York reported its first case in a woman who had visited Iran. – Rappler.com