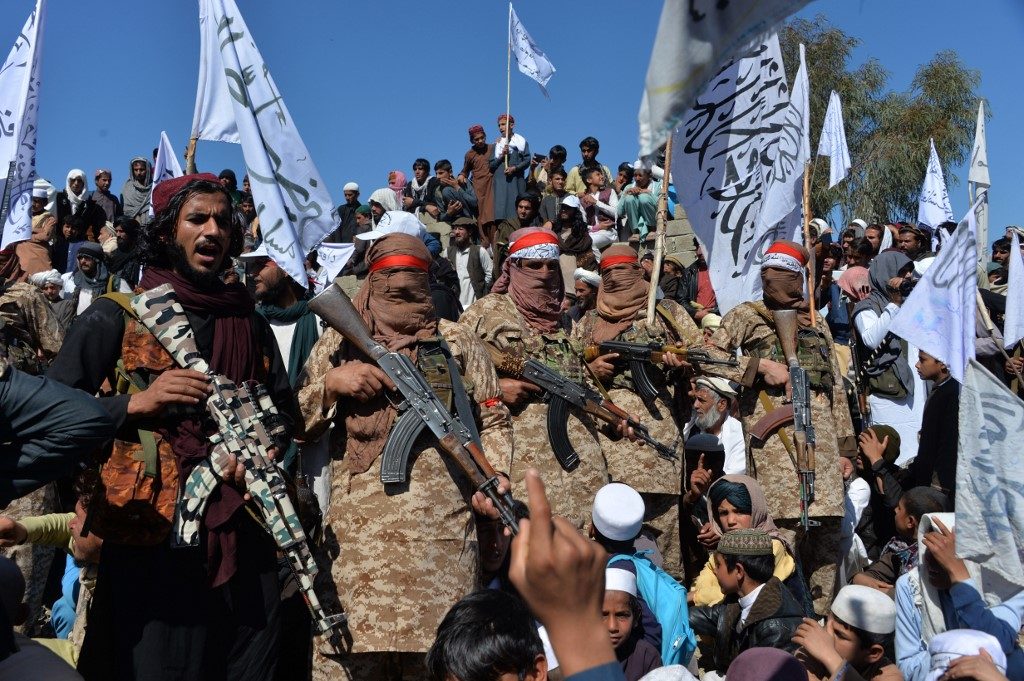 Facebook Twitter Copy URL
Copied
'As per the (US-Taliban) agreement, our mujahideen will not attack foreign forces but our operations will continue against the Kabul administration forces,' says Taliban spokesman Zabihullah Mujahid

KABUL, Afghanistan – A deadly blast shattered a period of relative calm in Afghanistan on Monday, March 2, as the Taliban told fighters to resume operations against Afghan security forces – just days after signing a deal with Washington aimed at ushering in a new era of peace.

No group immediately claimed responsibility for the attack at a football ground in Khost in eastern Afghanistan, where 3 brothers were killed, officials told Agence France-Presse (AFP).

The blast occurred at around the same time the Taliban ordered fighters to start up attacks against Afghan army and police forces, bringing to an apparent end the “reduction in violence” period that had seen a dramatic drop in bloodshed.

The partial truce between the US, the Taliban and Afghan security forces lasted for the week running up to the signing of an accord between the US and the insurgents in Doha on Saturday, February 29, and was extended over the weekend.

“The reduction in violence…has ended now and our operations will continue as normal,” Taliban spokesman Zabihullah Mujahid told AFP.

“As per the (US-Taliban) agreement, our mujahideen will not attack foreign forces but our operations will continue against the Kabul administration forces.”

The Taliban’s military commission circulated an order telling fighters to resume operations, according to a document provided to AFP by an insurgent source.

The order comes a day after President Ashraf Ghani said he would continue the partial truce at least until talks between Afghan officials and the Taliban kick-off, supposedly on March 10.

Fawad Aman, deputy spokesman for the defense ministry, said Monday the government was “checking to see if (the truce) had ended.”

“We have not had any reports of any big attacks in the country yet,” he said before the blast at the football match.

The US forces in Afghanistan declined to comment. Ahead of the signing of Saturday’s deal, Washington said it expected the Taliban to maintain the reduction of violence ahead of the launch of intra-Afghan talks, slated to take place in Oslo.

The Taliban’s resumption of attacks comes after Ghani warned the insurgents Sunday, March 1, that he was not committed to a key clause in the Doha deal involving the release of thousands of Taliban prisoners.

Speaking to AFP on condition of anonymity, a Taliban source in Pakistan accused Ghani’s government of acting in bad faith over the issue.

The Doha deal includes a commitment to swap 5,000 Taliban prisoners held by the government in return for 1,000 captives, but on Sunday Ghani said Washington had no authority to negotiate such an exchange.

“Ghani’s stand shows that the Americans hadn’t done the groundwork before signing the agreement,” the source said.

According to Khost police chief Sayed Ahmad Babazai, the blast at the football match killed 3 people and wounded 11 more.

“A motorcycle rigged with a bomb exploded during a football match,” Babazai told AFP.

Since the deal signing on Saturday, the Taliban have been publicly celebrating their “victory” over the US.

Under the terms of the deal, foreign forces will quit Afghanistan within 14 months, subject to Taliban security guarantees and a pledge by the insurgents to hold talks with the Kabul government.

While supporters of the accord say it marks a critical first step toward peace, many Afghans fear it amounts to little more than a US capitulation that will ultimately see the Taliban return to power.

The extent to which that happens hinges on the coming dialogue between the Taliban, the Ghani administration, and other Afghan political players.

The significant reduction in attacks due to the partial truce offered Afghans a rare opportunity to go about their daily lives without fear of violence. – Rappler.com