Mar 5, 2020 11:43 AM PHT
Agence France-Presse
Facebook Twitter Copy URL
Copied
(4th UPDATE) 'The object is to avoid the humanitarian crisis getting worse,' Erdogan says, though he adds that Turkey reserves the right to 'retaliate with all its strength against any attack' by Damascus 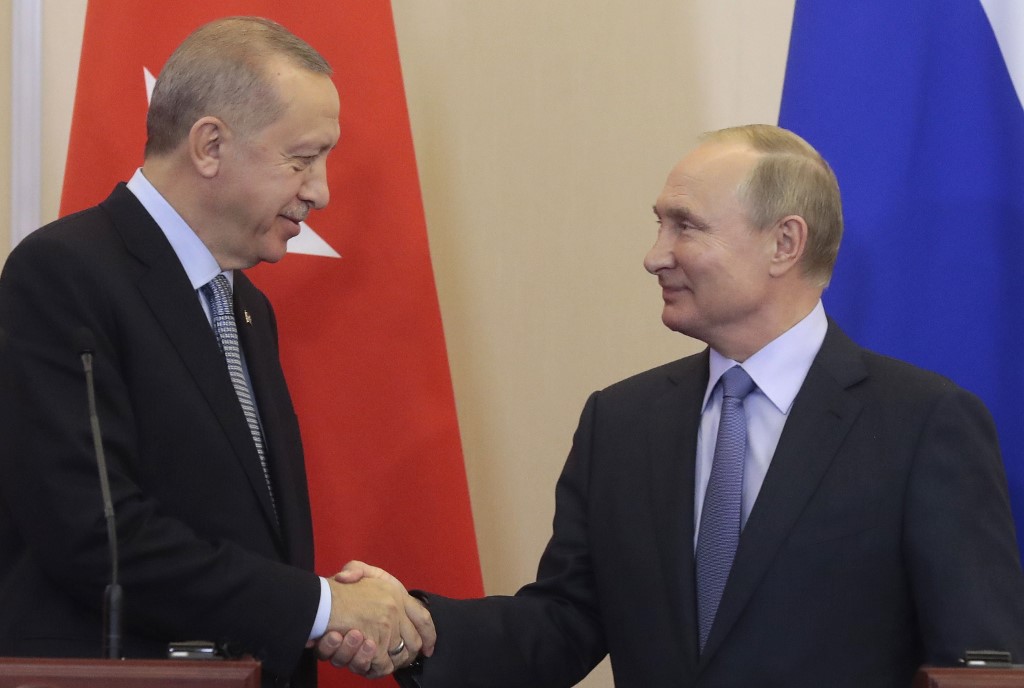 MOSCOW, Russia (4th UPDATE) – Turkey and Russia agreed on Thursday, March 5, to halt fighting in northern Syria that has sparked a humanitarian disaster and raised fears of their armies clashing, with a ceasefire due to take effect within hours.

After more than 6 hours of talks in Moscow, Russian President Vladimir Putin and Turkish counterpart Recep Tayyip Erdogan agreed on the ceasefire from midnight on Friday, March 6.

The agreement will also create a security corridor along the key M4 highway in northern Syria, where Turkish and Russian forces will launch joint patrols from March 15.

The deal aims to put a stop to intense fighting in Idlib, the northwestern province of Syria where Ankara is battling Moscow-backed government forces.

Nearly a million civilians have fled their homes due to the violence and dozens of Turkish soldiers have been killed. (READ: Erdogan threatens Europe with ‘millions’ of migrants)

Putin told a joint press conference after the talks that the agreement would “serve as a good basis for ending fighting” in Idlib and for “stopping the suffering of the civilian population.”

“The object is to avoid the humanitarian crisis getting worse,” Erdogan said, though he added that Turkey reserved the right to “retaliate with all its strength against any attack” by Damascus.

The situation in Idlib, the last rebel stronghold in Syria’s nine-year civil war, had become critical as Ankara for the first time launched a direct offensive against President Bashar al-Assad’s forces.

Turkey has long backed certain rebel groups against Assad but its priority now is to stop an influx of refugees among those fleeing an offensive the regime has been pressing on Idlib since December.

Ankara has demanded the European Union support its actions in Syria and last week opened its border with EU member Greece to migrants – a move decried by some in the bloc as “blackmail.”

Despite supporting opposing sides in the war, Russia and Turkey have worked to try to resolve the conflict and avoid direct confrontation.

The two countries agreed a deal in the southern Russian city of Sochi in 2018 that created a “de-escalation” zone in Idlib and allowed for the deployment of 12 Turkish observation posts.

In the run-up to Thursday’s talks, the two sides had traded accusations of violating the deal.

Ankara said Russia was not fulfilling part of the agreement that guaranteed no attacks on Idlib and the status quo on the ground.

Moscow in turn said Turkey was breaching the agreement by supporting “illegal armed groups” and accused Turkish forces of mingling with “terrorists” in Idlib.

Turkey officially declared an operation against the Assad government over the weekend, after 34 Turkish soldiers died in an air strike blamed on Damascus.

It has since downed 3 Syrian warplanes and killed dozens of soldiers and allied fighters, according to monitors.

Two more Turkish soldiers were killed by Syrian regime fire in Idlib, the defense ministry said, just hours before the ceasefire was due to take effect.

The deal leaves open the fate of the Turkish observation posts in Idlib, which have been surrounded since Damascus launched its offensive.

But it does mark the first time Russian and Turkish forces will operate jointly in Idlib.

The security corridor along the M4 highway, which connects second city Aleppo to the coast through Idlib, will run 6 kilometers deep both north and south of the highway.

The joint Russian-Turkish patrols will operate between the town of Tronba in Idlib and a village in Latakia province, a regime stronghold.

Erdogan warned Europe on Wednesday, March 4, that it must support Turkey’s “political and humanitarian solutions in Syria” if it wants to avoid a repeat of the 2015 migration crisis.

Thousands of migrants have massed at the Turkish-Greek border since Erdogan gave them the green light to try to enter Europe, leading to clashes with Greek police.

Turkey hosts roughly 3.6 million refugees from Syria – and hundreds of thousands from elsewhere – and Erdogan’s move has sparked concern in Europe of a renewed influx of migrants. – Rappler.com