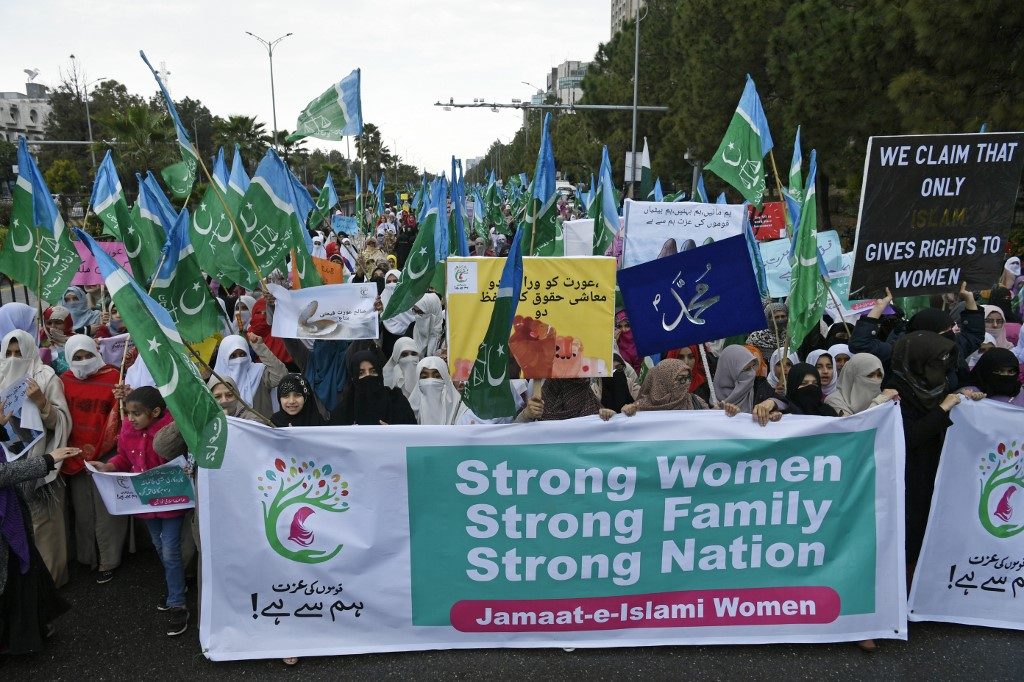 BANGKOK, Thailand (UPDATED) – Thousands took to the streets across the globe to mark International Women’s Day on Sunday, March 8, despite the coronavirus outbreak forcing the cancellation of a slew of events in Asia, as violence marred some European gatherings.

In China – the epicentre of the epidemic that has killed more than 3,500 people and infected over 100,000 worldwide – state broadcaster CCTV highlighted the work of female medical workers on the frontlines in the fight against the virus.

Despite growing fears over the worsening epidemic, marches went ahead in Thailand, Indonesia and the Philippines while women also allied in ultra-conservative Pakistan demanding “freedom.”

A women’s marathon planned in India was postponed over virus concerns as Prime Minister Narendra Modi said prominent women would run his social media accounts for the day.

France saw a clutch of virus deaths take its virus toll to 16 Saturday, March 7, but Paris hosted several rallies – one of which saw violence which organizers blamed on police.

A rally in Kyrgyzstan also turned violent as police detained dozens of protesters – mainly women – after masked men attacked them and tore up their placards in the capital Bishkek. A police spokesman said they were detained for their own safety and because police had not been warned about the rally.

In South Korea, where more than 7,000 virus infections make it the hardest hit country outside China, several events were cancelled.

“Although we can’t be physically together, our minds for realising gender equality are stronger than ever,” the country’s gender equality minister Lee Jung-Ok said in a video message.

‘Violence and poverty getting worse’

Many feminist groups held online campaigns instead of street marches, using hashtags such as #FemaleStrike, #PowerUp and #38InternationalWomensDay to raise awareness of gender inequality.

In Bangkok, protesters called for improved labour protections amid the epidemic that has infected dozens in Thailand, and greater rights under a military-aligned government.

Organizers blamed virus fears for the fact that the turnout was lower than last year.

Hundreds of women and men rallied in the Philippine capital Manila, burning a giant effigy of President Rodrigo Duterte – who they accuse of misogyny – to mark the day.  (READ: Filipinas sit-in to stop traffic, claim spaces on Int’l Women’s Day)

“The violence and poverty among women are getting worse,” Joms Salvador of women’s group Gabriela told Agence France-Presse.

“While we have 37 laws related to women’s rights, on the ground what is happening is a widespread violence in the forms of domestic abuse, sexual harassment and rape,” he said.

A big crowd turned out in Melbourne to watch the women’s Twenty20 World Cup final between India and Australia. US singer Katy Perry, wearing an outfit emblazoned with the female symbol, performed her hit single “Roar” ahead of the game.

Rallies were smaller than usual in virus-hit Europe.

On Sunday, topless Femen activists, wearing protective glasses and masks, gathered at Place de la Concorde in Paris to denounce “the patriarchal pandemic,” despite the best efforts of police to control them.

“Who’s doing the washing up?” they chanted. “We are making a revolution.”

But rights groups and politicians denounced what they said was police violence at a women’s march in Paris the night before, after scuffles broke out and police arrested nine people.

Paris mayor Paris Anne Hidalgo, currently seeking re-election, said she was shocked at the “unacceptable and incomprehensible” violence and expressed her solidarity with the demonstrators.

Elsewhere, women also turned out in force in Iraq and Lebanon, while Mexico, which has long battled deep-rooted gender violence, was to stage rallies, notably in the northern border city of Ciudad Juarez.

Back in Europe, Italian President Sergio Mattarella recorded a video message with much of the country in coronavirus lockdown, regretting the need to avoid large-scale gatherings.

Instead, he elected to “express a grateful thought to the women – and there are many – who are working in hospitals… in the red (quarantine) zones to fight the spread of the virus that worries us today.” – Rappler.com