Merkel ready to drop deficit rule, says 60-70% of Germany could get infected 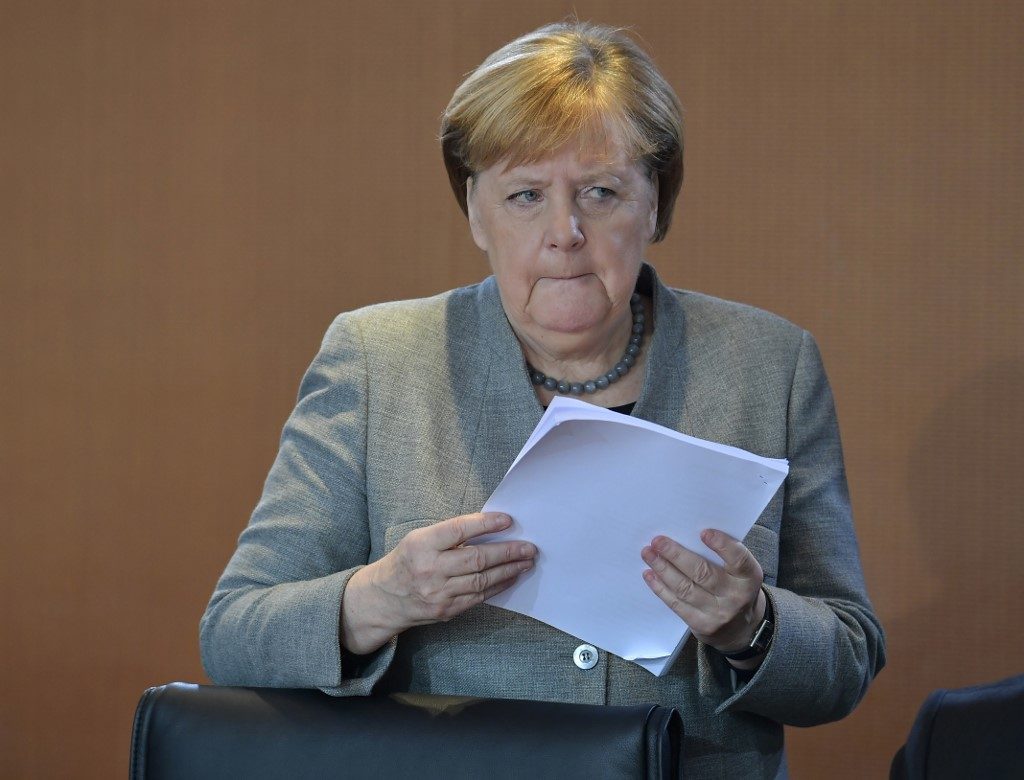 BERLIN, Germany – Chancellor Angela Merkel vowed Wednesday, March 11, to do everything it takes to tame the coronavirus crisis, signaling she is even ready to suspend the cherished dogma of keeping Germany’s budget balanced.

“It is an extraordinary situation, we will do what’s necessary and luckily Germany is relatively robust…we will do what we can to get through this situation well, and we will see at the end of that where our budget stands,” she said, stressing that ending the virus crisis “comes first.” (READ: WHO labels coronavirus a ‘pandemic’ as Europe scrambles to contain it)

Maintaining a balanced or “black zero” budget has been a key selling point of Merkel’s government, which believes that it would be irresponsible for the fast ageing nation to incur more debt that would ultimately be left to a shrinking workforce to pay off.

But with the coronavirus outbreak forcing some countries to shut borders, companies to keep workforces home, and foreign orders to collapse, calls have grown for Merkel’s government to help prop up Germany’s economy.

“An economy like Germany’s, which is extremely export dependent, is of course harder hit by global challenges” than one that is very concentrated on domestic demand, Merkel acknowledged, saying the government will announce liquidity help for firms this week.

The leader of Europe’s biggest economy said she was also prepared to look the other way if severely hit EU nations such as Italy were to flout the EU’s rules on limiting budget deficits as it fights the virus.

“On the European level regarding the (EU’s) stability and growth pact, we will be flexible. That was an important conclusion yesterday,” she said, referring to a telephone conference with EU leaders when the bloc agreed to do what it takes to shield the economy.

Stressing why it was important to do whatever it takes to battle the virus, Merkel quoted experts saying that “60-70% of the population will be infected if the situation” continues without a vaccine in sight.

With 3 deaths and the number of infections pushing close to 1,300, Merkel’s government has called for the cancellation of large events with more than 1,000 people.

Bundesliga clubs are playing to empty stadiums while key events on the business calendar like the Berlin ITB travel fair or the Hannover Messe industrial show have all been shuttered.

Classical concerts and operas in the capital are also hit, as curtains stay down for cultural events gathering more than 500 spectators.

In a bid to cushion the blow on workers forced to cut work hours because of crashing demand and production bottlenecks, the government is pushing through rules to ease compensation regulations for affected employees.

The relaxed criteria will apply from April and will be valid up to the end of the year.

Merkel’s press conference on Wednesday marked her first outing before the press on COVID-19 and comes as Germany’s biggest daily Bild accused her on its front page of failing to take charge in the crisis.

The German leader shrugged off the criticism, saying that Health Minister Jens Spahn “is aware” of her involvement from the start.

While vowing that the state will do whatever it takes, Merkel also said every individual has a part to play in the battle.

“Our solidarity, sensibility and our hearts are being put to the test,” she said, stressing that it was key to “win time” for a cure or a vaccine to be found before health systems are stretched beyond capacity. – Rappler.com