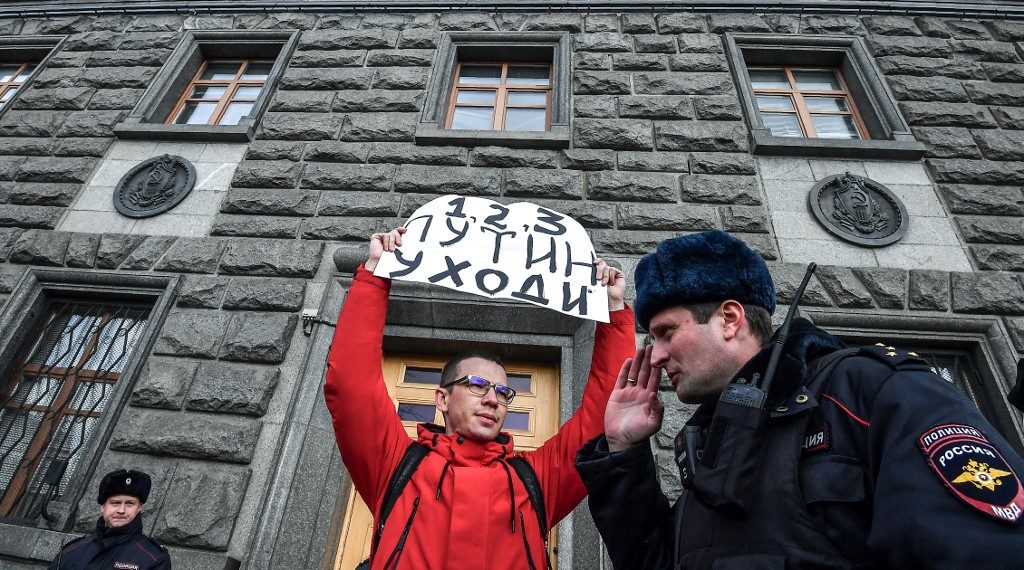 Facebook Twitter Copy URL
Copied
Veteran human rights campaigner Lev Ponomaryov, who chairs the For Human Rights organization, is among those detained in the sweep by national guard and police

MOSCOW, Russia – Moscow police detained dozens of people at a protest against “political repressions” near the headquarters of the Russian security service, including a well-known human rights activist.

The protest demanding to free political prisoners was called by supporters of men convicted this year on terrorism charges, many of whom said in court they had been tortured by the FSB security service.

Mostly young protesters turned up to participate in picketing near the FSB building, with some unfurling signs calling the security service the “Federal Service of Lawlessness” while others shouted “Shame!”

The OVD Info website, which tracks detentions at political protests, listed 35 people as detained by police, adding that some were hurt in the altercations.

An Agence France-Presse correspondent at the scene estimated about 30 detentions.

Veteran human rights campaigner Lev Ponomaryov, who chairs the For Human Rights organization, was among those detained in the sweep by national guard and police, which announced via loudspeaker the action is not authorized.

He was seen arguing with police that pickets don’t require authorization, before being led to a police bus.

A court in Penza region last month handed terms between 6 and 18 years to seven young men who were accused of creating a terrorist organization called “Network” with the goal of overthrowing the government.

They all denied charges in court, and most said they had been tortured in custody with electrodes and beatings to extract confessions since their arrests in 2017 and 2018.

Two other defendants in the case are still on trial in St. Petersburg. – Rappler.com