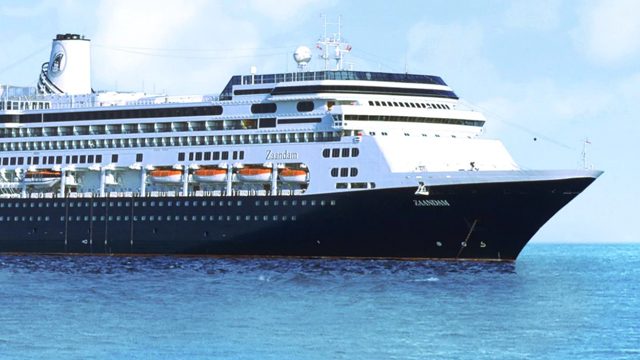 Facebook Twitter Copy URL
Copied
The Zaandam, flying under the Dutch flag and operated by the Holland America group, looks for a place for its sick passengers to disembark before continuing on to its final destination – Fort Lauderdale, Florida

SANTIAGO, Chile – A cruise ship with more than 1,800 people aboard – including 42 complaining of flu-like symptoms – was prevented from docking in Chile on Monday due to fears over the coronavirus.

The Zaandam, flying under the Dutch flag and operated by the Holland America (Carnival) group, was looking for a place for its sick passengers to disembark before continuing on to its final destination in Fort Lauderdale, Florida, via the Panama Canal.

The vessel set off from Buenos Aires on March 7.

“Since it is flu season, and COVID-19 testing is not available on board, it is difficult to determine the cause of these elevated cases at this time,” the company said, adding it was following the recommendations of the US Centers for Disease Control and Prevention.

All sick people had been isolated and their close contacts put in quarantine, it said.

After rounding Cape Horn, the Zaandam was initially set to dock on March 21 in San Antonio, the port serving the region near the Chilean capital Santiago.

“Despite previous confirmations that guests could disembark in Punta Arenas, Chile, for flights, we were not permitted to do so. No one has been off the ship since March 14 in Punta Arenas,” near the southern tip of Patagonia, Holland America said.

On March 20-21, the ship was allowed to stock up on food, medicine and fuel in Valparaiso, a port north of San Antonio.

More than a hundred passengers are French, including the parents of Gurvan Le Pavec, who told AFP the situation on board was getting tense.

“Since March 15, the ship has been on the coast of Chile, not knowing where it is going, trying several options but without a specific destination,” he said.

Since the first suspected COVID-19 case on Sunday, passengers had been confined to their cabins, with meals left by their doors, he said.