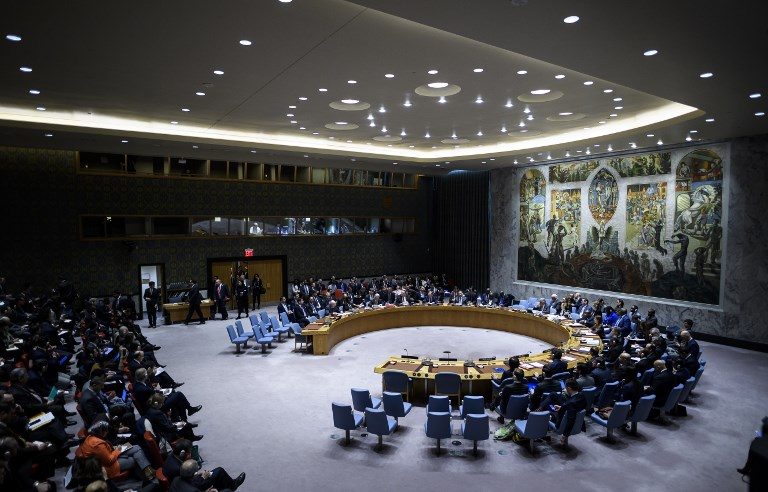 Facebook Twitter Copy URL
Copied
The virtual votes temporarily end the famous spectacle of the Security Council, where diplomats theatrically raise their hands to vote or veto and can take advantage of the cameras to passionately attack other countries

UNITED NATIONS, USA – The UN Security Council on Monday, March 30, for the first time approved resolutions remotely after painstaking negotiations among diplomats who are teleworking due to the coronavirus pandemic.

The Security Council unanimously voted for 4 resolutions, including one that extended through April 2021 the expiring mandate of UN experts who are monitoring sanctions on North Korea, diplomats said.

The Council also endorsed a fourth resolution aimed at improving the protection for peacekeepers.

The resolutions are the first approved by the Security Council since it began teleworking on March 12 and comes as COVID-19 rapidly spreads in New York, which has become the epicenter of the disease in the United States. (READ: Global lockdown tightens as coronavirus deaths mount)

Seeking to abide by quarantine and teleworking recommendations, the Security Council was obliged to create completely new rules after 75 years as the global guarantor of peace and security.

Following about a dozen days of talks, Council members agreed that they would have 24 hours following closed-door negotiations on draft resolutions to send their votes electronically to the UN Secretariat, which will release the results.

Several countries wanted to move sessions entirely to videoconferencing, but Russia – one of 5 nations wielding veto power – objected on both legal and political grounds, diplomats said.

Russia instead accepted only that the Security Council hold “informal” talks by video.

The virtual votes temporarily end the famous spectacle of the Security Council, where diplomats theatrically raise their hands to vote or veto and can take advantage of the cameras to passionately attack other countries.

Several diplomats said that the new procedure made sense for technical votes on the renewal of missions but were not ideal for more controversial matters.

“Giving everyone 24 hours to file confidential votes may make sense for routine business, but will be absurdly cumbersome if the Council has to respond to an acute crisis fast,” he said.

Alexandra Novosseloff, an expert on the United Nations at the University of Paris-Pantheon-Assas, said the Security Council was trying to “remain active in very restrictive conditions that are not conducive to long negotiations and meetings.”

But she discounted the risk of more superficial results, saying that UN resolutions have always been a search for the “lowest common denominator” through negotiations.

China, which holds the rotating presidency of the Security Council for March, called the measures “temporary, extraordinary, and provisional” and said that they would not set a precedent for operations once the pandemic eases.

At the insistence of Secretary-General Antonio Guterres, the UN headquarters on the East River remains symbolically open, even if the vast majority of diplomats, both from the Secretariat and member-countries, are no longer going physically.

Guterres has at the same time stepped up his own appearances with dramatic pronouncements, including warning that millions could die without unified action against COVID-19 and calling for a worldwide ceasefire so humanity can focus on fighting the disease.

The Security Council’s comparatively quick adoption of new rules came amid renewed talk in Washington on allowing virtual votes in the US Congress, whose members must be physically present. – Rappler.com