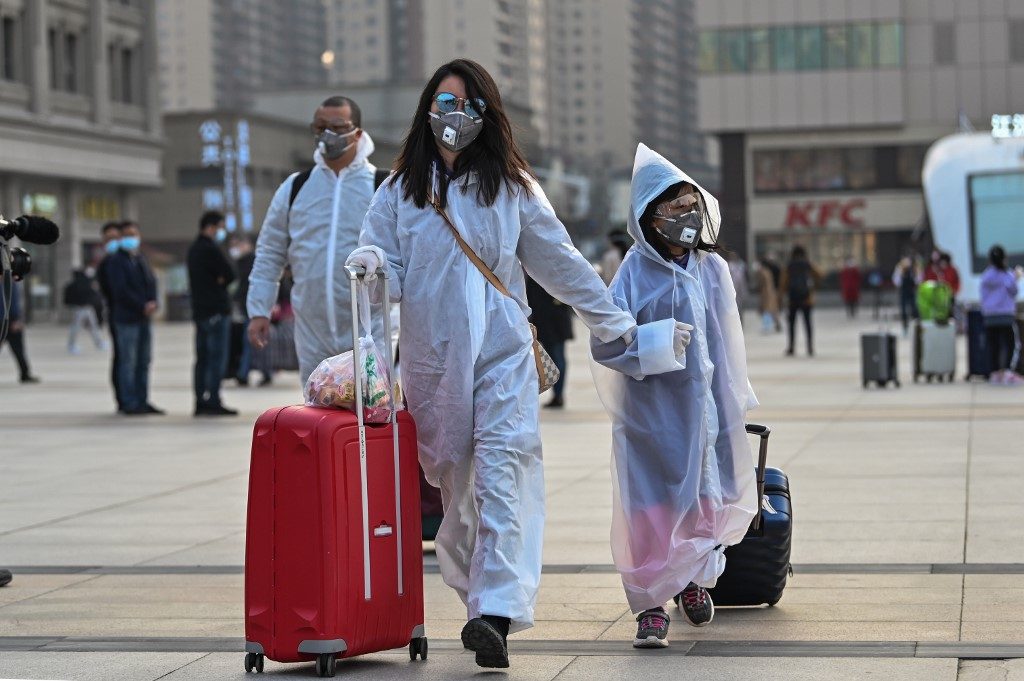 As the ban expired on schedule at midnight (1600 GMT Tuesday), passengers – many in hazmat suits – expressed joy and relief as they filed into Wuhan’s Wuchang station to catch the first overnight trains out of town.

“Wuhan has lost a lot in this epidemic, and Wuhan people have paid a big price,” said a 21-year-old man surnamed Yao, who was heading back to his restaurant job in Shanghai.

“Now that the lockdown has been lifted, I think we’re all pretty happy.”

Government estimates say as many as 55,000 people are expected to flow out Wednesday by train from the city, which was placed under an unprecedented quarantine lockdown on January 23.

State-run Xinhua news agency said columns of passenger cars also lined up to stream out of the city at midnight as road barricades on its outskirts were dismantled, and that flights also resumed early Wednesday at Wuhan’s international airport.

Some travelers could barely contain their happiness.

The lockdown made Wuhan the first place in the world subjected to draconian containment steps now seen in many countries.

The rest of surrounding Hubei province quickly followed, confining tens of millions of people at homes and cutting the province off from the world as transport in and out was halted.

Chinese media outlets hailed the removal of the travel ban, with headlines posted on websites after midnight saying: “Wuhan, long time, no see.”

Hubei and the provincial capital Wuhan have suffered the majority of China’s officially claimed tally of more than 81,000 overall infections and more than 3,300 deaths.

An announcement blaring over the train station PA system said: “Wuhan deserves to be called the city of heroes. Wuhan people deserve to be called heroes.”

Despite the drastic containment steps, the pathogen spread across China and the world.

But the ruling Communist Party – which is accused of a slow-footed response and an initial attempt to cover up the outbreak – has claimed recent success in bringing the virus to heel, though questions over the accuracy of its reported case numbers persist. (READ: U.S. report accuses China of covering up coronavirus numbers)

Its official national tally of deaths and overall cases has plummeted in recent weeks, with the National Health Commission saying Tuesday that no new deaths had been logged the preceding 24 hours.

That was the first fatality-free day since China began publishing figures in January.

Relief has been tempered, however, by caution over new risks: rising numbers of infected people arriving in China from abroad – primarily returning Chinese citizens – and the invisible threat of asymptomatic cases.

Hubei residents had been confined to their homes until about two weeks ago, when restrictions began to be eased, triggering a resumption of inbound travel from other parts of China.

Authorities, however, had waited until Wednesday to allow normal traffic out of Wuhan amid lingering fears elsewhere in China that people from the city pose a risk.

Chinese disease-control officials said in January that the virus likely leapt from wildlife to humans at a Wuhan market that sold wild animals for food.

A return to normality in Wuhan appears far-off, however.

Various restrictions on movement within the sprawling metropolis will remain in place to guard against a second wave of infections, arguing that “even greater vigilance is needed” now that travel measures are being relaxed.

Officials have said schools in Wuhan will remain closed for now, and citizens are being discouraged from leaving the city, or even their own residential neighbourhoods.

Government estimates said nearly half the people expected to leave Wuhan on Wednesday were bound for the southern economic powerhouse of Guangdong province, a magnet for migrant workers from the country’s less-developed interior.

“In the end, everyone was stuck here together,” said a 25-year-old Wuhan man who came home for January’s Lunar New Year holiday and got stuck. He is headed back to his job in Guangdong.

“There was definitely some difficulty. But we just had to restrain ourselves and stay home.”

Many of those leaving Wuhan must first prove that their local neighborhood has been declared virus-free, and many face two-week quarantines in their destination provinces.

Hu Meng, 25, who is heading back to her work at a foreign trading company in Guangdong, said such quarantines perpetuate discrimination against Wuhan’s traumatized people.

“You can quarantine the virus but you shouldn’t quarantine love. They treat all Wuhan people like the virus,” she told AFP. – Rappler.com