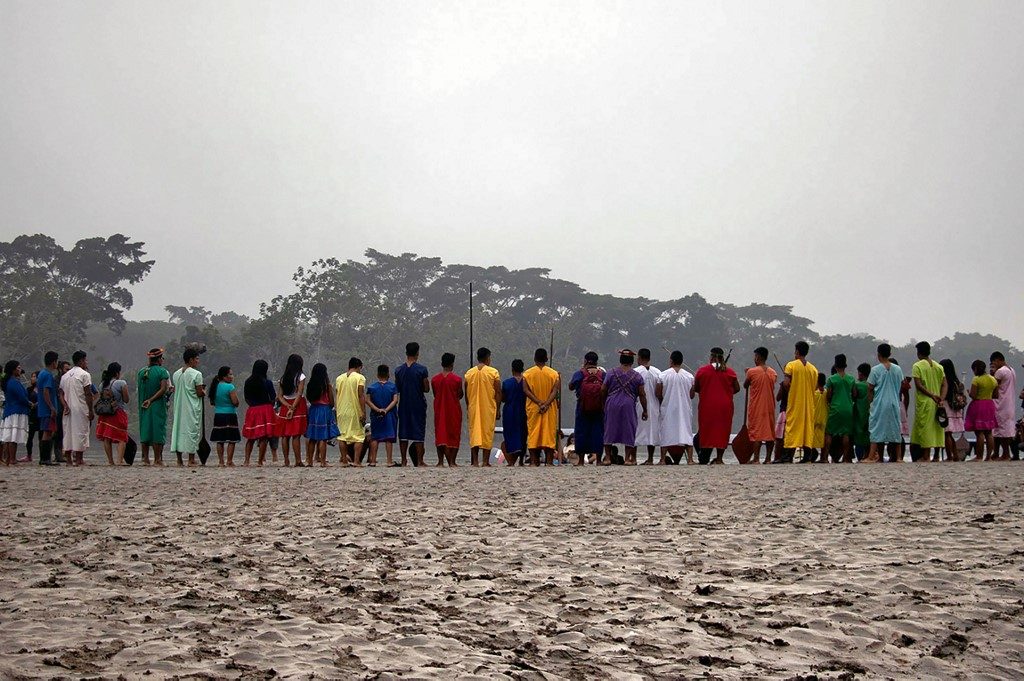 Facebook Twitter Copy URL
Copied
'The families living on the river banks are lacking food and no longer know where to find water to drink, or with which to bathe,' says Marcia Andi, a Kichwa and leader of the Mushuk Llacta community

QUITO, Ecuador – Indigenous communities in Ecuador’s Amazon region have filed a lawsuit against the government and oil companies after a devastating oil spill polluted rivers and deprived them of drinking water.

The pollution in Orellana province near the Peruvian border was the result of an April 7 landslide that ruptured 3 pipelines, spewing 15,000 barrels of oil into nearby rivers including Amazon tributary the Napo, a community leader and an NGO said. (READ: Torment in Ecuador: virus dead piled up in bathrooms)

“The families living on the river banks are lacking food and no longer know where to find water to drink, or with which to bathe,” Marcia Andi, a Kichwa and leader of the Mushuk Llacta community told AFP by phone.

Around 27,000 indigenous people from the Kichwa and Shuar tribes living along the Coca and Napo rivers are affected by the spill, according to Maria Espinosa, a lawyer with the Amazon Frontlines NGO.

They are seeking “immediate measures to guarantee the supply of water, food, and access to health for the populations that have been affected,” Espinosa told AFP, adding that aid provided to date was “insufficient” for the communities’ needs.

State oil company PetroEcuador, named in the suit, said it had distributed 500,000 liters of water in containers to 59 indigenous communities affected by a spill.

It said one of its pipelines had been ruptured and later repaired.

The company said it had begun environmental cleanup work that also included the Quijos river.

A second company, OCP Ecuador, was also named as it owned one of the ruptured pipelines.

Local communities accuse the companies of not alerting them to the spill.

Amazon Frontlines, which has been gathering evidence of the impact, said the spill is estimated to be the largest in the region since 2004.

“Although the rupture of the pipelines was not intentional…the authorities and companies named in the lawsuit were acting negligently and omitting information about the situation,” said Espinosa.

Ecuador is one of the countries worst affected by the coronavirus pandemic, and Amazon indigenous communities have severed connections with the outside world to prevent infections. (READ: Coronavirus reaches Yanomami people in Amazon)

“We don’t go to the village. We eat the fish we manage to catch in the river and now we have been hit by this oil spill,” said Luis Salazar, a resident in the village of Amarunmesa. – Rappler.com