May 9, 2020 11:56 PM PHT
Agence France-Presse
Facebook Twitter Copy URL
Copied
The International Monetary Fund (IMF) says it had been too optimistic when it predicted the world economy would contract by 3% this year 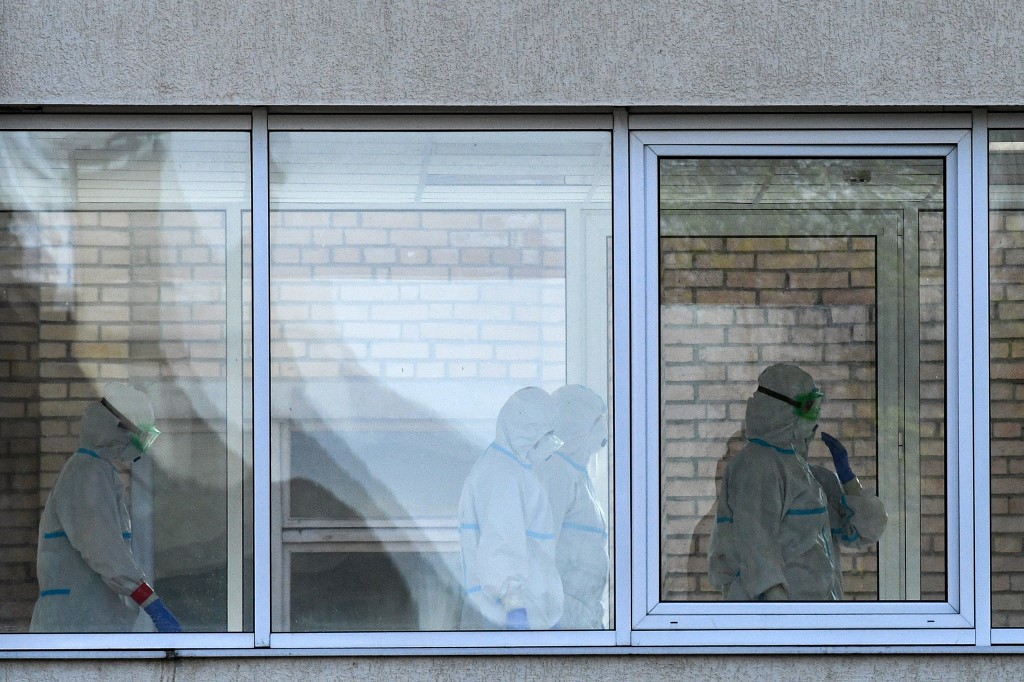 MOSCOW, Russia – Rising coronavirus infections forced Russia on Saturday, May 9, to curtail its celebrations marking the end of World War II, as deaths from the pandemic surged past 275,000 worldwide and the global economy reeled from the disease and lockdowns.

Economic figures point to the most acute downturn in nearly a century – the United States being particularly hard hit with 20.5 million jobs lost in April.

The figure was the highest ever reported and represented the biggest percentage increase since the Great Depression of the 1930s.

Despite the dire news, President Donald Trump insisted next year would be “phenomenal” for the economy in a country where the virus has killed more than 75,000, telling reporters: “I think it’s going to come back blazing.”

He is determined to reopen the US economy even though the virus has reached the White House’s inner circle, with confirmation that an aide of Vice President Mike Pence had tested positive.

Some European countries are already attempting to manage an easing of their lockdowns – German Chancellor Angela Merkel planning an almost complete return to normality within a month.

Italy and Denmark both plan to reopen some public buildings soon and Britain is expected to offer a roadmap out of lockdown on Sunday.

The pandemic, which has already infected almost four million worldwide, continues to wreak havoc on cultural calendars with celebrations to mark the end of World War II in Europe being the latest to fall victim.

Across Europe, events marking 75 years since Nazi Germany’s surrender were due to be held on Friday, but were cancelled or scaled down.

Russia, which usually hosts grand military parades for the event a day later than the rest of Europe, finds itself at the centre of the pandemic crisis.

A Red Square parade was postponed and President Vladimir Putin instead gave a speech at a war memorial outside the Kremlin walls on Saturday, making no mention of the coronavirus.

“Our veterans fought for life, against death. And we will always be equal to their unity and endurance,” Putin said, highlighting the sacrifices made by the Soviet Union in what Russians call the Great Patriotic War.

“We know and firmly believe that we are invincible when we stand together.”

Russia is now the fifth hardest-hit country with nearly 200,000 confirmed infections and its caseload is rising rapidly with more than 10,000 new ones confirmed every day this week.

Elsewhere in the former Soviet Union, parades were held only in Turkmenistan and Belarus – where President Alexander Lukashenko said he had “no choice” as “the eyes of those Soviet soldiers who perished for our freedom are watching”.

As many Americans and Russians faced up to an intense barrage of deaths and new cases, Brazil also emerged as a potential global concern.

The country is the centre of the outbreak in Latin America and announced a record number of deaths on Friday, with 751 deaths bringing its toll to almost 10,000.

With its car industry almost entirely shut down and other economic indicators in the red, a government minister warned this week that Brazil faces “economic collapse” if lockdowns continue.

And the dire economic forecasts got even worse on Friday, with the International Monetary Fund (IMF) saying it had been too optimistic when it predicted the world economy would contract by three percent this year.

“Incoming economic data for many countries is below our already pessimistic assessment for 2020,” said IMF chief Kristalina Georgieva.

Her organization is fielding requests for emergency loans from dozens of its members – Uganda and Kenya the latest to agree borrowing worth more than $1 billion between them.

The virus has prompted soul-searching from the most unlikely of quarters, with officials in China – where the virus emerged late last year – the latest to admit that their response to the virus had been inadequate.

“The novel coronavirus outbreak was a big test that revealed China still has shortcomings in its major epidemic prevention and control system, public health systems and other aspects of responding,” said Li Bin, deputy director of the National Health Commission.

But far from bringing the world together, the crisis has triggered a war of words between Trump and China.

The Trump administration has repeatedly alleged the virus came from a Wuhan laboratory, despite the theory being roundly dismissed by experts, US allies and China.

The feud spread to the UN Security Council on Friday, where the US prevented a vote on a resolution calling for a ceasefire in various conflicts to allow officials to focus on the pandemic.