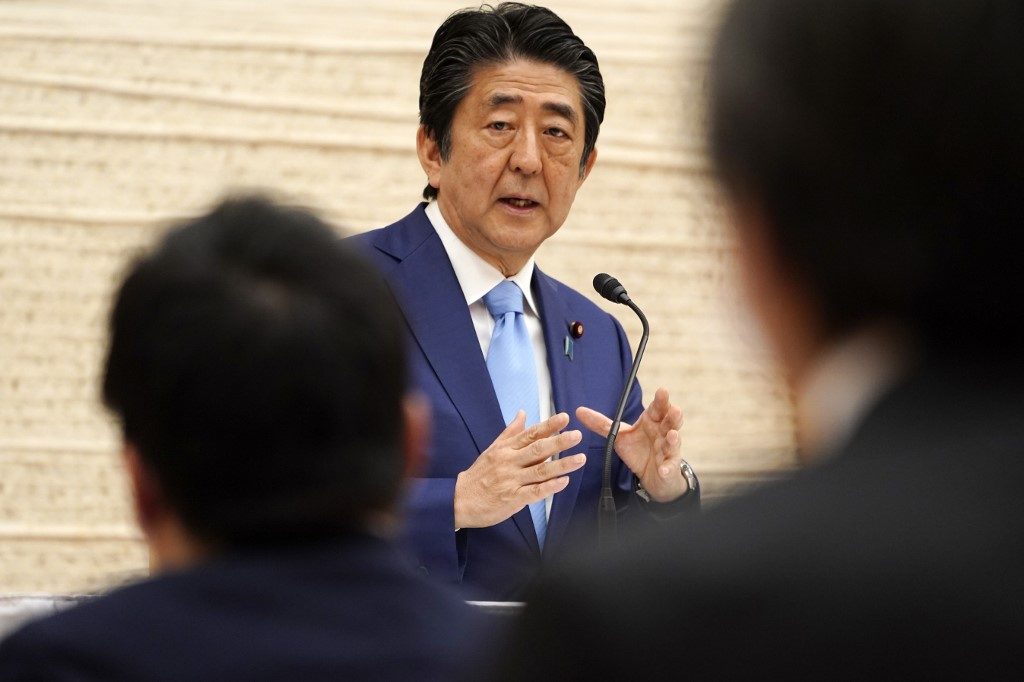 Facebook Twitter Copy URL
Copied
New infections have come down sharply, enabling the government to end the measure in 39 out of 47 prefectures before it is due to expire on May 31

TOKYO, Japan – Japan’s prime minister on Thursday, May 14, lifted a state of emergency imposed due to the coronavirus for the majority of the country but kept it in place for top cities Tokyo and Osaka.

After fears the virus could explode in Japan, new infections have come down sharply, enabling the government to end the measure in 39 out of 47 prefectures before it was due to expire on May 31.

But with new cases still emerging daily in Tokyo, Osaka and the northern island of Hokkaido, Shinzo Abe told reporters in a televised news conference that the state of emergency would be kept in place for those regions.

“If possible, before May 31, we would like to lift the state of emergency for the other regions as well,” he said.

“It’s going to be a long road ahead,” Abe warned, asking residents to continue to refrain from going out and visiting other regions.

“If each of us fails to exercise full vigilance, the future in two weeks time is unpredictable. A second declaration of a state of emergency is possible,” he warned.

Japan’s state of emergency falls far short of the toughest measures seen in parts of Europe and the United States.

It allows local governors to urge people to stay at home and call on businesses to remain shut.

But officials cannot compel citizens to comply and there are no punishments for those who fail to do so.

Schools in much of the country closed down even before the emergency was declared on April 7 in Tokyo and 6 other regions, before being expanded nationwide.

Japan’s virus outbreak remains small compared with those seen in parts of Europe and the United States, with a little over 16,000 confirmed infections recorded and 687 deaths.

New cases have dropped recently, with 55 fresh infections confirmed Wednesday, May 13, nationwide, and just 10 in Tokyo.

Japan recorded its first coronavirus infection in mid-January and came under early pressure with a mass outbreak on the Diamond Princess cruise ship docked off the city of Yokohama.

Despite so far avoiding the devastating tolls seen in places such as Italy and New York, there have been persistent fears that Japan’s healthcare system could be quickly overwhelmed by a sudden spike in infections.

Japan has also come under fire for a relatively low level of testing.

However, Abe stressed that Japan’s strategy of keeping track of clusters had worked in the regions where the state of emergency was being lifted.

“As for the 39 prefectures, we were able to contain (the spread of infections) to the level at which it can be prevented with a thorough cluster-focused approach,” Abe told reporters. – Rappler.com