Trump threatens to pull out of WHO over virus response, China

May 19, 2020 12:43 PM PHT
Agence France-Presse
Facebook Twitter Copy URL
Copied
(UPDATED) Donald Trump is locked in a bitter spat with Beijing, alleging it covered up the initial outbreak in central China late last year before the disease unleashed death and economic devastation across the planet 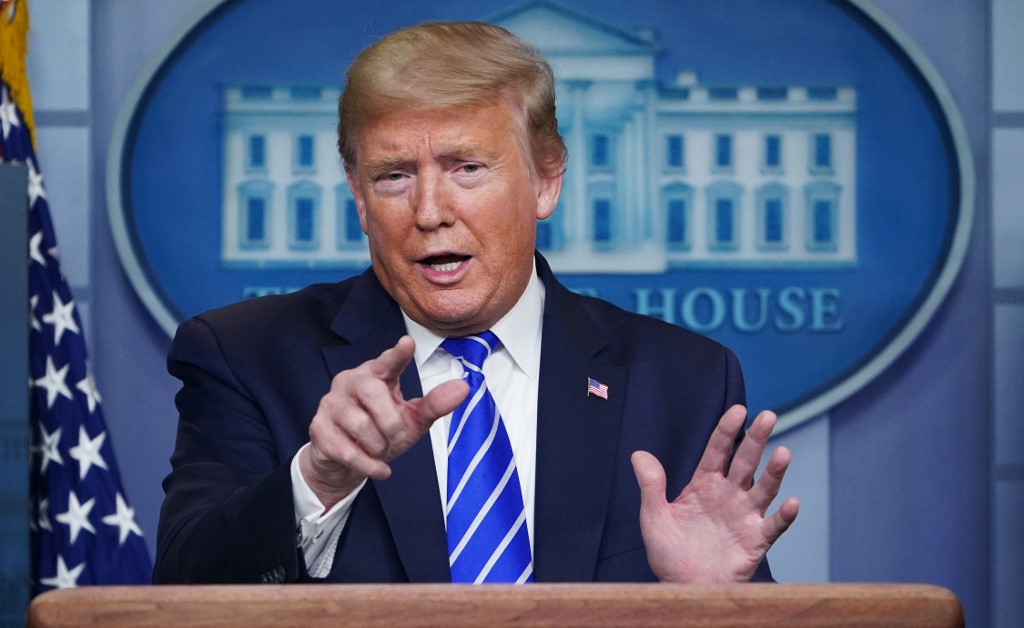 WASHINGTON, DC, USA (UPDATED) – President Donald Trump on Monday, May 18, threatened to pull the US out of the World Health Organization, accusing it of botching the global coronavirus response and of being a “puppet of China”.

The American leader has been locked in a bitter spat with Beijing, alleging it covered up the initial outbreak in central China late last year before the disease unleashed death and economic devastation across the planet.

More than 317,000 people have died of COVID-19 out of nearly 4.8 million infections worldwide, and governments are scrambling to contain the virus while seeking ways to resuscitate their hammered economies.

With more fatalities and cases in the United States than any other country by far, under-pressure Trump has blamed the WHO for not doing enough to combat its initial spread.

“They’re a puppet of China, they’re China-centric to put it nicer,” he said at the White House. “They gave us a lot of bad advice.”

Trump had already suspended US funding to the UN body, and after his White House comments, he tweeted a letter he had sent to WHO chief Tedros Adhanom Ghebreyesus threatening to make that freeze permanent.

“It is clear the repeated missteps by you and your organization in responding to the pandemic have been extremely costly for the world,” the letter said.

“The only way forward for the World Health Organization is if it can actually demonstrate independence from China,” it added, giving the body 30 days to show “substantive improvements.” (EXPLAINER: What Donald Trump’s funding cuts to WHO mean for the world)

Before the threat, the WHO had promised an independent review of its pandemic response.

Beijing has furiously denied the US allegations that it played down the threat, and Chinese President Xi Jinping reiterated at the World Health Assembly that his nation had been “transparent” throughout the crisis.

As he launched his latest attack on China, Trump also dropped a bombshell saying he was taking hydroxychloroquine, an anti-malaria drug that his own government’s experts have said is not suitable for fighting the coronavirus.

“I take a pill every day,” said the president, adding that he is using it because he has “heard a lot of good stories”.

‘A test from God’

Experts have warned that the social distancing measures that have impacted more than half of humanity will remain necessary to stop the virus until a vaccine or viable medical treatment is available.

Development work on a prophylactic is under way at breakneck speed around the world, and results from a trial in the United States sparked optimism on Monday.

Early – and small – clinical trials of a vaccine by US firm Moderna showed encouraging results, with recipients showing an immune response similar to people recovering from COVID-19. It will begin a larger second-phase trial soon.

In China, meanwhile, scientists at Peking University have said they are developing a drug that can help stop the pandemic without a vaccine by using antibodies that can neutralize the virus.

They are planning clinical trials for the treatment, and are hoping to have the drug available later this year and in time for any potential winter outbreak.

Authorities around the world are keeping an eye on such breakthroughs as the virus continues on its destructive path, with many poorer nations now seeing a dramatic rise in infections even as the caseload eases in more developed parts of the world like Europe.

In Indonesia, gravediggers at a cemetery earmarked for COVID-19 victims in the capital Jakarta are struggling to keep up with the number of corpses arriving every day, trying not to touch the bodies and lessen the chance of getting infected themselves.

“I’ve been digging graves for 33 years now and I’ve never been this tired before,” said gravedigger Minar.

“This is probably a test from God.”

The vast economic damage caused by the virus has led to unprecedented emergency stimulus measures by governments and central banks, and the latest came from Europe where France and Germany laid out a half-trillion-euro fund.

The hard-hit continent has seen deaths and hospitalizations drop in recent days, sparking optimism about a post-pandemic recovery.

The daily death count in the United States has also slowed over the last couple of days, as all 50 states began easing lockdown measures to varying degrees.

Despite the hope in Europe and North America, other countries are only just starting to feel the full force of the virus, and United Nations chief Antonio Guterres warned the impact on the southern hemisphere could be “even more devastating”.

Already, Brazil has overtaken Britain to have the third-highest number of infections in the world with more than 255,000 confirmed cases, and the death toll in Latin America and the Caribbean has topped 30,000.

In Chile, where the government has imposed strict distancing measures in some areas after a dramatic rise in cases, the economic pressure from lockdowns was brought into sharp focus as violence erupted in a crowded, poor area on the outskirts of the capital Santiago.

“It is not because of the quarantine,” resident Veronica Abarca told AFP.

“It is aid, food, what people are asking for right now. – Rappler.com