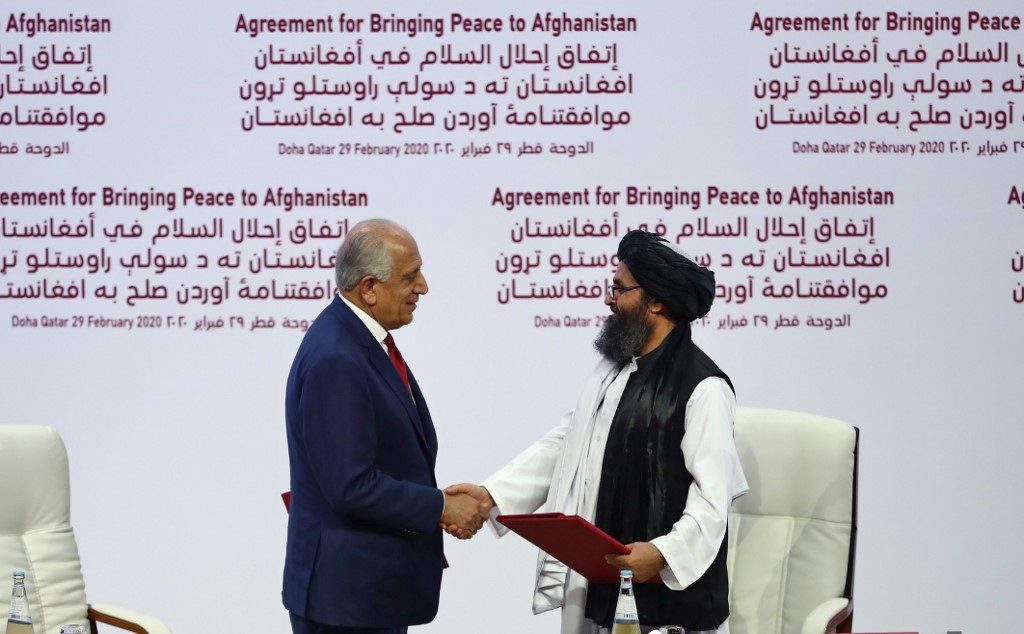 Facebook Twitter Copy URL
Copied
In a rare message released ahead of the end of the Islamic holy month of Ramadan, Haibatullah Akhundzada urges Washington 'not to waste' the opportunity offered by the deal to end America's longest war

KABUL, Afghanistan – The leader of the Taliban said Wednesday, May 20, that militants were committed to a landmark deal with the US, despite being accused of carrying out thousands of attacks in Afghanistan since it was signed.

In a rare message released ahead of the end of the Islamic holy month of Ramadan next week, Haibatullah Akhundzada urged Washington “not to waste” the opportunity offered by the deal to end America’s longest war.

“The Islamic Emirate is committed to the agreement…and urges the other side to honor its own commitments and not allow this critical opportunity to go to waste,” Akhundzada said in a statement, using the name the Taliban called Afghanistan when they were in power.

After months of negotiations, the Taliban and US signed a deal in February which stipulates Washington will withdraw all troops from Afghanistan by next year in return for security guarantees.

“I urge American officials to not afford anyone the opportunity to obstruct, delay and ultimately derail this internationally recognized bilateral agreement,” the reclusive leader said.

Akhundzada hails from the Taliban’s traditional bastion of Kandahar, and was appointed head of the group after a US drone strike killed his predecessor, Mullah Akhtar Mansour, in 2016.

Mansour had succeeded Mullah Omar, the one-eyed warrior-cleric who founded the group.

Akhundzada is a hardline religious scholar and a former head of the Taliban court system.

In his message he outlined the political system he envisaged for Afghanistan after the exit of foreign troops.

“The objectives of our jihad…are freedom of our country and to establish an Islamic system,” he said.

“Every male and female member of society shall be given their due rights.”

During their previous rule in 1990s, the Taliban had implemented harsh Islamic punishments like public executions and amputations.

Men were forced to grow beards and women had to be fully covered. They had also banned girls above 10 years from going to school.

US President Donald Trump’s administration has made it a priority to end the war in Afghanistan, and in a bid to pull out foreign forces US officials have been pushing the Taliban and government leaders to hold peace talks.

The talks have stumbled, but the Afghan government was strengthened over the weekend by the announcement of a power-sharing deal between President Ashraf Ghani and his former chief executive Abdullah Abdullah, who will lead negotiations with the Taliban.

Under the US accord the Taliban pledged to stop attacking cities and foreign troops, but militants have continued to target Afghan forces in the provinces.

Analysts say the Taliban have been emboldened by the deal, and Afghan government officials have reported more than 3,800 attacks since it was signed, killing 420 civilians and wounding 906.

The US official who brokered the deal with the Taliban said last week the militants had kept up their end of the bargain – even if recent violence violated the spirit of the accord.

“The Taliban have implemented their agreement not to attack the coalition forces,” said Zalmay Khalilzad, the US Special Representative to Afghanistan.

His remarks came after a horrific attack against a maternity hospital in Kabul that killed dozens – including mothers and infants – and a suicide bombing at a funeral.

The Taliban denied involvement in the attacks, but President Ghani blamed them and the Islamic State (IS) group for the bloodshed.

“They’ve committed not to carry out attacks in 34 major cities, and they haven’t done that, based on our assessment,” Khalilzad said of the Taliban.

“But we believe that they’re in violation of the spirit” of the deal, he said, adding the hospital attack was carried out by IS.

Khalilzad arrived in Kabul and met with Ghani on Wednesday, officials said.

Following the recent attacks the government ordered security forces to switch to an “offensive” posture against the Taliban.

They responded by vowing to increase attacks against government forces.

The United Nations has warned that the spike in violence has led to increased casualties among civilians. – Rappler.com