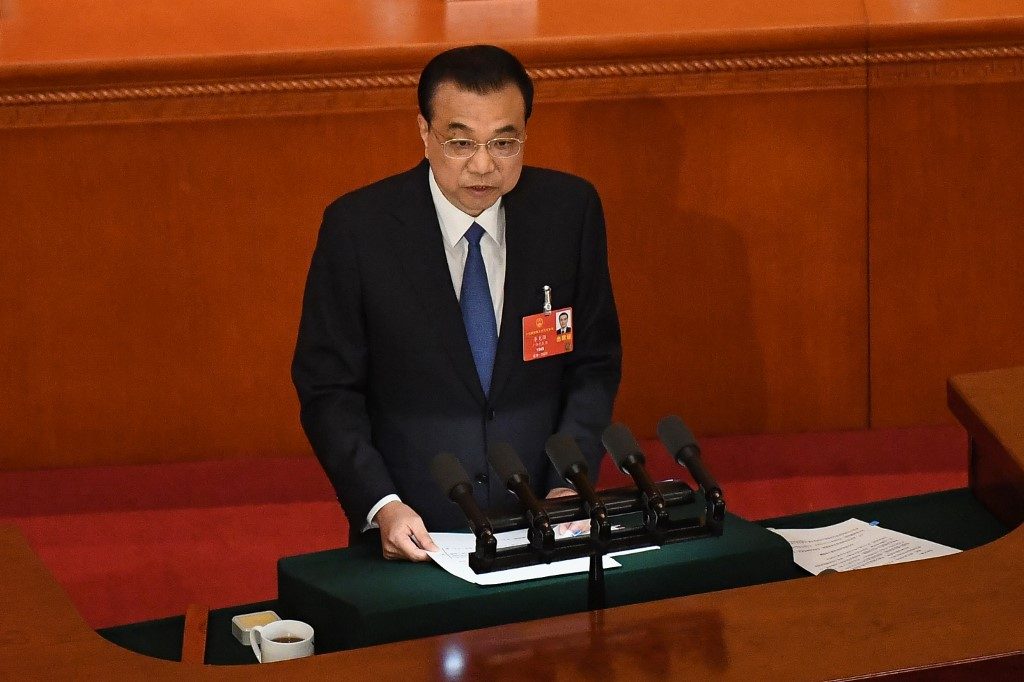 BEIJING, China (3rd UPDATE) – China moved on Friday, May 22, to quash Hong Kong’s pro-democracy movement by unveiling plans for a new security law at the start of its annual parliamentary session that also laid bare the “immense” economic challenges caused by the coronavirus.

The 3,000-member National People’s Congress (NPC) began with a minute of silence for China’s victims of the coronavirus before Premier Li Keqiang delivered his annual version of the United States president’s “state of the union” address.

“At present, the epidemic has not yet come to an end, while the tasks we face in promoting development are immense,” Li told mask-wearing delegates in Beijing’s cavernous Great Hall of the People, while also touting China’s success in suppressing the contagion.

The pandemic forced Beijing to delay its annual parliament by two months and reduce its length to a week.

Citing “great uncertainty” ahead, Li took the rare move of refraining from announcing a 2020 growth target for China’s pandemic-battered economy, offering only a vague promise to address mounting joblessness and to improve living standards.

The most controversial move at the NPC opening was the introduction of a proposal to impose a security law in Hong Kong – immediately denounced by the US and pro-democracy figures in the financial hub who called it a death sentence for the territory’s unique freedoms.

The draft proposal will “guard against, stop, and punish any separatism, subversion of the national regime, terrorist group activities, and such behaviors that seriously harm national security.”

The motion, which goes to a vote in the rubber-stamp legislature on Thursday, May 28, would authorize Chinese lawmakers to directly enact long-delayed Hong Kong security legislation itself at a future date, rather than leaving it up to the territory’s administration.

China made clear it wanted the law passed after Hong Kong was rocked by 7 months of massive and sometimes violent pro-democracy protests last year.

City leader Carrie Lam, who is attending the NPC, vowed to “fully cooperate” with Beijing over the national security proposal and complete the legislation “as soon as possible.”

An initial bid to enact such legislation in 2003 was shelved after half a million people took to the streets in protest.

One of the proposal’s articles opens the door for Beijing to increase its presence in the financial hub by allowing the central government to set up, “when needed,” agencies in Hong Kong “to fulfill relevant duties to safeguard national security in accordance with the law.”

China’s army already has a garrison in Hong Kong, but soldiers have not intervened in the protests.

The city’s mini-constitution allows the local government to request help from People’s Liberation Army garrisons in the territory in the event of a public order breakdown.

“This is the end of Hong Kong, this is the end of ‘One Country, Two Systems,’ make no mistake about it,” Civic Party lawmaker Dennis Kwok told reporters, referring to China’s description of the territory’s status.

Stocks tumbled in the city on Friday on news of the security law move.

US President Donald Trump promised to respond “very strongly” once details emerge, and US senators introduced legislation to impose sanctions on any entity involved in curbing Hong Kong’s autonomy.

Targets could include police who crack down on demonstrators, Chinese officials involving in Hong Kong policy, and banks that conduct transactions with anyone who infringes on its freedoms.

Although infection numbers have dwindled, China is still recovering from the COVID-19 outbreak that first appeared in the central city of Wuhan late last year and spread globally.

Beijing has faced accusations led by Trump that it mishandled its initial response, leading to nearly 330,000 deaths and economic carnage worldwide and sending US-China tensions spiraling to new depths.

China’s economic growth shrank 6.8% in the 1st quarter because of the virus, its first contraction in decades.

Li had originally been expected to announce a 2020 growth target of around 6% – but the pandemic has scrambled expectations, leaving millions of Chinese jobless and imperiling countless businesses.

Still, the government announced on Friday it would increase its military budget by 6.6%.

The budget will be set at 1.268 trillion yuan ($178 billion) for the year – the second biggest in the world after the US, but continuing a trend of slowing increases.

China’s rapidly growing and modernizing armed forces are a source of concern in the US and neighboring Asian countries nervous about Beijing’s rise. – Rappler.com