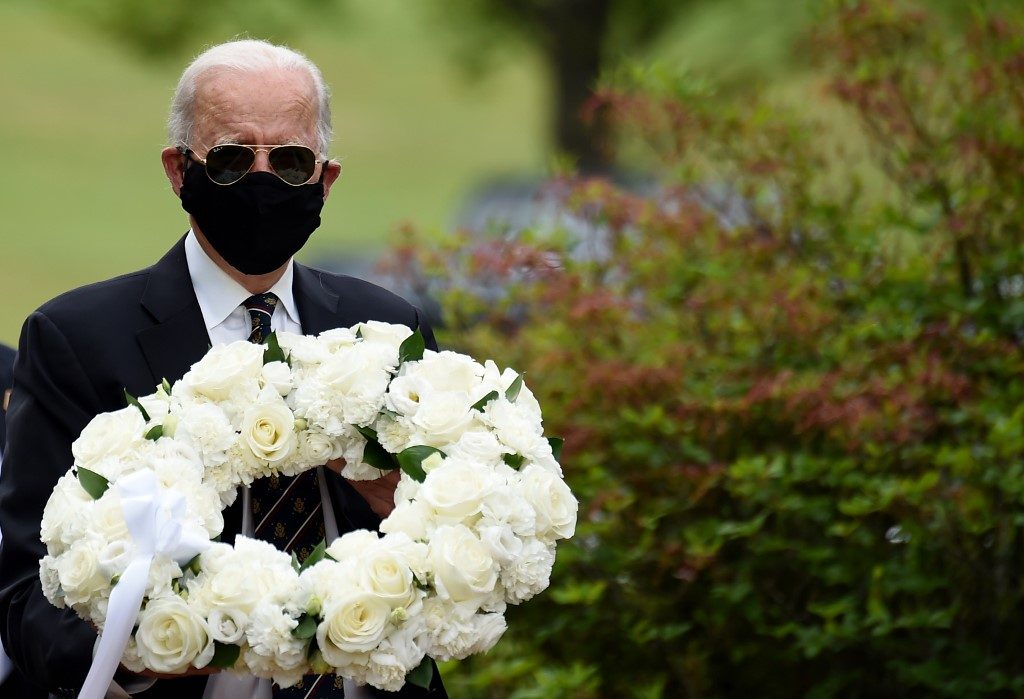 Facebook Twitter Copy URL
Copied
Biden wears a mask covering his mouth and nose for the brief ceremony, in contrast with his rival for the US presidency, Donald Trump, who has yet to wear a mask in public

NEW CASTLE, USA – Joe Biden, the presumptive Democratic presidential nominee, emerged from more than two months of seclusion Monday, May 25, wearing a black face mask during a visit to lay a wreath on the day the United States honors its war dead.

Biden’s last public appearance was March 15 when he faced off against his former Democratic rival Bernie Sanders for a debate in a television studio held with no live audience. (READ: Accuser says Joe Biden should quit White House race)

“It feels good to be out of my house,” said the 77-year-old, who has remained in isolation at his home in Wilmington, Delaware in keeping with recommended measures to protect the elderly and prevent the spread of COVID-19.

According to the candidate, he and his wife have left their home only for occasional walks or bike rides since mid-March.

“Thank you for your service,” the former vice president said to a well-wisher after paying his respects at the Veterans Memorial Park in New Castle, Delaware.

Biden wore a mask covering his mouth and nose for the brief ceremony, in contrast with his rival for the US presidency, Donald Trump, who has yet to wear a mask in public. (READ: Mask-less Trump visits mask factory in Arizona)

Biden and his wife Jill placed a wreath of white flowers at the Delaware memorial park and observed a moment of silence during the brief ceremony before returning to their motorcade.

Asked by a reporter if he had a message for the country, Biden’s reply was difficult to hear.

“Never forget the sacrifices that these men and women made. Never, ever, forget,” he said through his face mask.

Trump and his wife Melania took part in a wreath-laying at Arlington National Cemetery, before travelling to Fort McHenry in Baltimore where the president delivered a speech in honor of America’s war dead – and paid tribute to the military men and women who “raced into danger” in battling the coronavirus pandemic.

Biden abruptly canceled a rally in Ohio March 10, replacing it with a speech to a half empty hall in Philadelphia that evening, followed by a news conference at a Wilmington hotel March 12.

Although he has celebrated primary victories while in confinement, he has been forced to conduct his campaign online for more than two months from a television studio installed in his basement. – Rappler.com