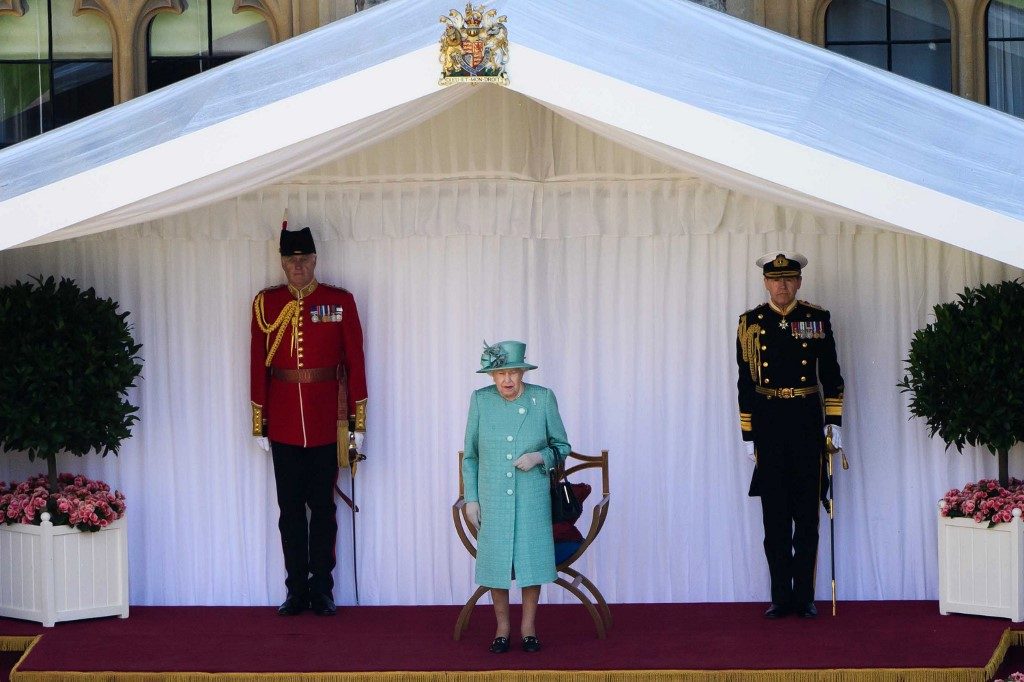 Facebook Twitter Copy URL
Copied
Queen Elizabeth II watches a smaller military parade in the grounds of Windsor Castle, where she has been staying during the COVID-19 outbreak, in her first official public appearance since the country's virus lockdown began in late March

LONDON, United Kingdom – Britain’s Queen Elizabeth II celebrated her official birthday on Saturday, June 13, in subdued style, with a scaled down version of the traditional “Trooping the Colour” ceremony due to the coronavirus pandemic.

The 94-year-old monarch watched a smaller military parade in the grounds of Windsor Castle, where she has been staying during the COVID-19 outbreak, in her first official public appearance since the country’s virus lockdown began in late March.

It was the first time the castle, west of London, has staged an event to mark a sovereign’s official birthday since 1895, when a ceremony was held in honor of Queen Victoria.

The parade featured soldiers from the Welsh Guards, who observed government virus guidelines to keep at least two meters apart, in a ceremony dubbed “mini-Trooping”.

The annual “Trooping” event, which normally features hundreds of servicemen and women from Britain’s most prestigious regiments for a centuries-old spectacle of military pomp and pageantry in front of thousands of spectators, was cancelled because of the health crisis.

Britain has been among the worst-hit countries in the world by COVID-19, with the number of suspected and confirmed deaths passing the grim milestone of 50,000 this week.

The Queen observed Saturday’s pared back ceremony in the quadrangle of Windsor Castle from a dais and was given the royal salute by the troops.

Despite isolating at the castle for the last 3 months, the elderly monarch has tried to remain visible, making a rare televised address to the nation in April and her debut on a digital platform this week in a video conference call.

She celebrated her actual 94th birthday on April 21 without the traditional gun salute, due to the health crisis.

The double birthday tradition was started by King George II in 1748, who wanted to have a summer celebration as his own birthday was October 30. – Rappler.com