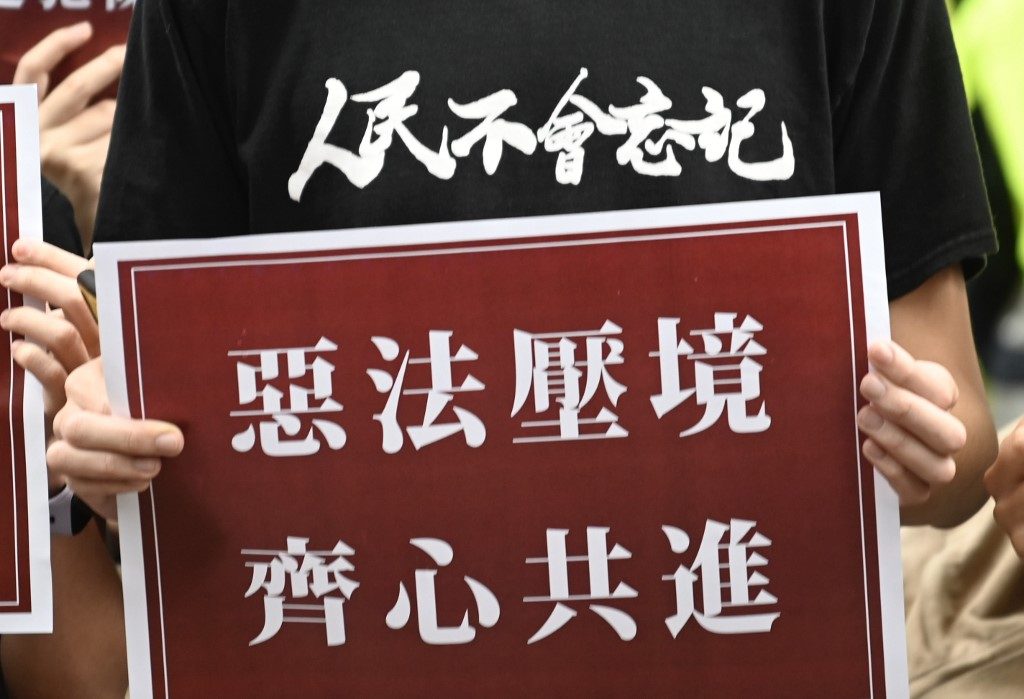 HONG KONG (5th UPDATE) – China imposed a sweeping national security law on Hong Kong Tuesday, June 30, dramatically tightening its grip on the semi-autonomous city in a historic move decried by Western nations as a threat to the financial hub’s freedoms.

Described by Beijing as a “sword” hanging over the heads of those endangering national security, the law took effect hours after it was signed by President Xi Jinping and just 6 weeks since it was first unveiled.

The law gives Beijing jurisdiction over “very serious” national security crimes, with offenders facing up to life in prison, according to the text published late Tuesday.

The controversial law also empowers China to set up a national security agency in the city, staffed by officials who are not bound by local law when carrying out duties.

The new suite of powers radically restructures the relationship between Beijing and Hong Kong, toppling the legal firewall that has existed between the city’s independent judiciary and the mainland’s party-controlled courts.

“It marks the end of Hong Kong that the world knew before,” prominent democracy campaigner Joshua Wong tweeted as his political party Demosisto announced it was disbanding.

“With sweeping powers and ill-defined law, the city will turn into a #secretpolicestate.” (READ: China threatens U.S. countermeasures if punished for Hong Kong law)

Some Hongkongers responded by deleting Twitter accounts and scrubbing other social media platforms.

In contrast, former city leader Leung Chun-ying took to Facebook to offer bounties of up to HK$1 million ($130,000) for anyone who could help secure the first prosecutions under the new legislation or track down people who have recently fled the city.

The United States, Britain, the European Union and the United Nations rights watchdog have all voiced fears it could be used to stifle criticism of Beijing, which wields similar laws to crush dissent on the mainland.

“The fact that Hong Kong people will only come to know what’s really in this new law after the fact is more than preposterous,” Claudia Mo, an opposition lawmaker, told Agence France-Presse (AFP).

As part of the 1997 handover from Britain, Hong Kong was guaranteed certain freedoms – as well as judicial and legislative autonomy – for 50 years in a deal known as “One Country, Two Systems.”

The formula helped to cement the city’s status as a world-class business hub, bolstered by a reliable judiciary and political freedoms unseen on the mainland.

Critics have long accused Beijing of chipping away at that status, but they describe the new security law as the most brazen move yet.

British Prime Minister Boris Johnson said he was “deeply concerned” and that London would scrutinize the law “to understand whether it is in conflict” with the handover agreement.

Cases can be passed to mainland China for prosecution by the Supreme People’s Procuratorate and the trial will be in the Supreme Court.

Serious offenders can face 10 years to life in prison, “no matter whether violence has been used, or the threat of violence used,” the law declared.

The law also said certain national security cases could be held behind closed doors without juries in Hong Kong if they contained state secrets, although the verdict and eventual judgements would be made public.

On the mainland, national security laws are routinely used to jail critics, especially for the vague offense of “subversion.”

They have said the law will only target a minority of people, will not harm political freedoms in the city and will restore business confidence after a year of historic pro-democracy protests.

“I urge the international community to respect our country’s right to safeguard national security and Hong Kong people’s aspirations for stability and harmony,” city leader Carrie Lam told the UN Human Rights Council in a video message on Tuesday.

Millions took to the streets last year while a hard core of protesters frequently battled police in often violent confrontations that saw more than 9,000 arrested.

Hong Kong has banned protests in recent months, citing previous unrest and the coronavirus pandemic, although local transmissions have ended.

Some Western nations warned of potential repercussions ahead of the security law’s passing.

However many are also wary of incurring Beijing’s wrath and losing lucrative access to the mainland’s huge economy.

Washington – which has embarked on a trade war with China – has said the security law means Hong Kong no longer enjoys sufficient autonomy from the mainland to justify special status.