Jul 13, 2020 6:23 PM PHT
Agence France-Presse
Facebook Twitter Copy URL
Copied
At least 13 leading activists appear in court on Monday, July 13, to be formally charged with 'inciting' an unlawful assembly, which carries up to 5 years in jail 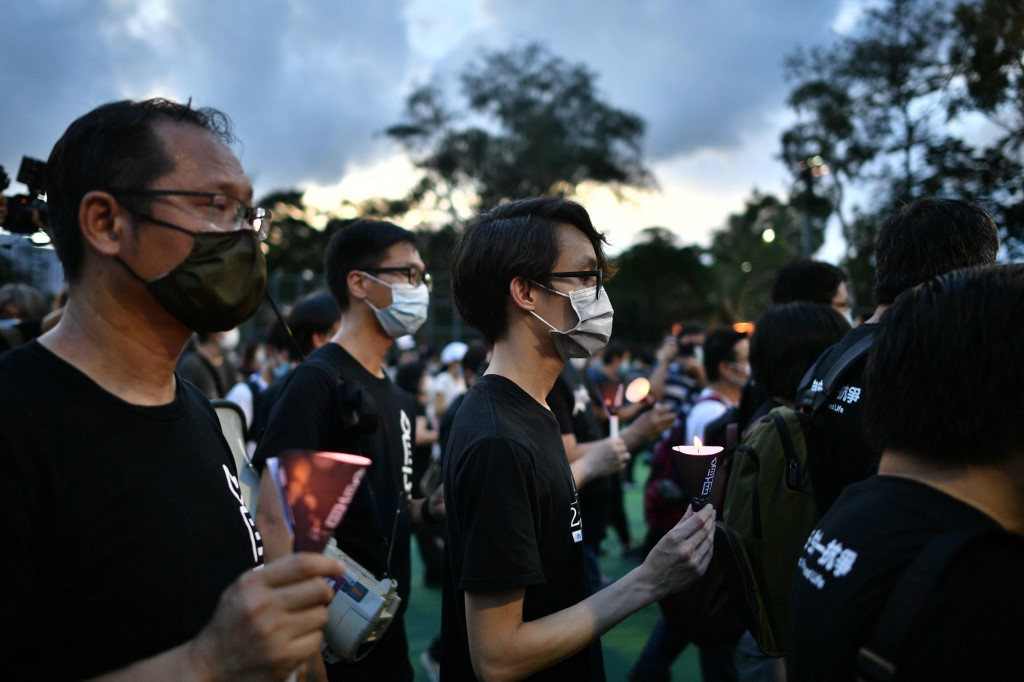 HONG KONG – Thirteen prominent Hong Kong democracy activists appeared in court on Monday, July 13, charged with holding an unauthorized gathering to mark the Tiananmen Square crackdown, the latest in a string of prosecutions against protest leaders in the restless financial hub.

Last month tens of thousands of Hongkongers defied a ban on rallies to mark the June 4 anniversary of Beijing’s deadly 1989 crackdown against students pushing for democracy.

The annual vigil has been held in Hong Kong for the last 3 decades and usually attracts huge crowds. It has taken on particular significance in recent years as the semi-autonomous city chafes under Beijing’s increasingly authoritarian rule.

This year’s gathering was banned for the first time with authorities citing coronavirus measures. At the time local transmission had largely been halted.

But thousands turned out to hold candles in their neighborhoods and in Victoria Park, the traditional site of the vigil.

All appeared in court on Monday to be formally charged with “inciting” an unlawful assembly, which carries up to 5 years in jail.

Among them are Jimmy Lai, the millionaire owner of the openly pro-democracy Apple newspaper, veteran democracy activists such as Lee Cheuk-yan and Albert Ho as well as young campaigner Figo Chan.

When asked if he understood the charge, Lee invoked the hundreds who were killed by Chinese tanks and soldiers at Tiananmen.

“This is political persecution,” he said. “The real incitement is the massacre conducted by the Chinese Communist Party 31 years ago.”

Some of those charged on Monday – and many other leading democracy figures – face separate prosecutions related to last year’s huge and often violent pro-democracy protests.

China’s leaders have rejected calls to give Hongkongers universal suffrage and portrayed the protests as a plot by foreigners to destabilize the motherland.

Earlier this month Beijing imposed a sweeping national security law aimed at stamping out the demonstrations once and for all.

The legislation targets subversion, secession, terrorism and foreign collusion, with sentences including life in prison.

But its broad phrasing – such as a ban on encouraging hatred towards China’s government – has sent fear rippling through a city used to being able to speak its mind.

On the mainland, national security laws are routinely used to crush dissent.

Monday’s court appearance coincided with the third anniversary of the death of Chinese dissident Liu Xiaobo, the first Nobel Peace Prize winner to die in custody since Nazi Germany.

Liu was arrested in 2009 and charged with “inciting subversion of state power,” later dying of cancer.

Those charged in Hong Kong on Monday held up pictures of him before going into court.

Since Beijing’s new law was enacted police have arrested people for possessing pro-independence or autonomy material. Libraries and schools have pulled books, political parties have disbanded and one prominent opposition politician has fled.

The law bypassed Hong Kong’s legislature and its contents were kept secret until the moment it was enacted.

It empowered China’s security apparatus to set up shop openly in the city for the first time, while Beijing has also claimed jurisdiction for some serious national security cases – ending the legal firewall between the mainland the city’s independent judiciary.

Beijing has also announced global jurisdiction to pursue national security crimes committed by anyone outside of Hong Kong and China, including foreigners. – Rappler.com