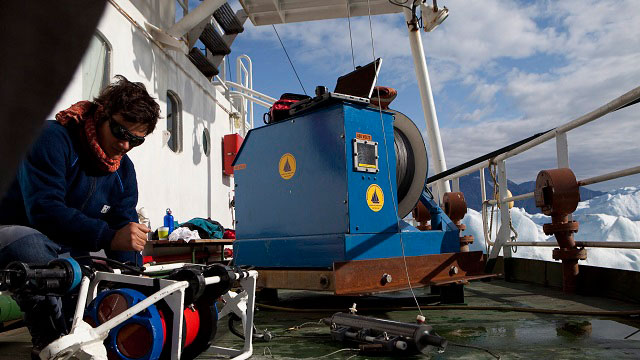 MOSCOW, Russia – Greenpeace has deployed its icebreaker through an Arctic shipping route to protest against oil drilling in the fragile ecosystem, defying Russian authorities, the group said Saturday, August 24.

Earlier this week Greenpeace said Russia had refused the permission to enter the Northern Sea Route on several occasions citing concerns about the icebreaker’s ability to withstand thick ice.

The global environmental group has called the move “a thinly veiled attempt to stifle peaceful protest.”

In defiance of the Russian authorities, the Greenpeace said its ship Arctic Sunrise entered the Northern Sea Route early Saturday to protest plans by the country’s top oil firm Rosneft and its US partner ExxonMobil to drill near the Russian Arctic National Park.

“We refuse to let illegal attempts by the Russian government stop us from exposing dangerous oil drilling in the Arctic.

“The Russian Arctic National Park is a special place full of rare and threatened Arctic wildlife, and faces an infinitely greater threat from reckless oil companies than a fully equipped Greenpeace icebreaker,” Christy Ferguson, a Greenpeace Arctic campaigner aboard the ship, was quoted as saying in the group’s statement.

“If Rosneft and ExxonMobil bring in offshore drilling platforms they will risk catastrophic blowouts and spills that could devastate the region,” said Ferguson, adding that the two oil giants “rely on secrecy and evasion.”

The Arctic Sunrise was heading to the Kara Sea where several vessels contracted by Rosneft and ExxonMobil are conducting seismic testing to prepare for offshore drilling.

Vladimir Chuprov, head of the Russian energy unit at Greenpeace, said the icebreaker was so far moving forward unhindered.

“According to reports from the vessel, there are no military ships or border guard vessels in the field of view,” he said on Echo of Moscow radio.

“Nor are there any radio signals which would hinder the ship’s movement.”

Russian officials have said the ship owner was violating Russian law and the UN Convention on the Law of the Sea.

“The transportation ministry sent a letter to the foreign ministry with a request to get in touch with the Netherlands’ maritime authorities with the aim of  influencing the owner of the vessel on behalf of the flag state,” a spokeswoman told Agence France-Presse (AFP).

“By being in the Northern Sea Route waters the vessel presents a serious threat to the environment.”
The Russian foreign ministry did not immediately react.

Greenpeace said the plans to drill in the protected ecosystem were in contravention of Russia’s own environmental laws.

Established in 2009, the natural park is home to endangered species such as the bowhead whale and a major breeding ground for polar bears.

“High-technology solutions which will be used to implement the Arctic projects are capable of ensuring maximum environmental safety of the works,” the company said in a statement sent to AFP.

Rosneft added it was open to monitoring by independent observers.

Both Russia and the United States hope that the global warming gradually melting the Arctic sea ice will help them tap the vast oil and natural gas resources believed to be buried in the region.

Putin has pledged to turn the Northern Sea Route into a key shipping artery, part of the Kremlin’s bid to mark out its stake over the energy-rich Arctic.

The 60-year-old Russian strongman has made much of his concern for the wildlife and projects to protect endangered species and was in the past pictured kissing animals and fish. – Rappler.com