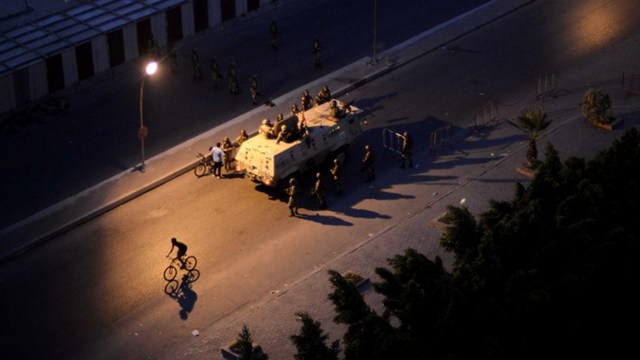 Security officials said a car bomb struck the minister’s convoy around 10:30 am (0830 GMT) near his home in the Nasr City area, in the first such attack in Cairo in years.

The bombing, which came as security forces pressed a clampdown on loyalists of ousted president Mohamed Morsi, sparked fears of a resurgence of the Islamist militant attacks that plagued Egypt in the 1990s.

The interior ministry said the blast was “possibly caused by a suicide bombing in which a powerful bomb was placed in the truck of a car.”

It said 10 policemen and 11 civilians were wounded in the attack.

He said he had warned of such violence after the launch on August 14 of a crackdown on Islamists who had set up camps in Cairo to protest the army’s removal of Morsi on July 3.

“I had warned before the dispersal of sit-ins in Rabaa and Nahda that there will be a wave of terrorism. This was expected,” Ibrahim said.

The presidency and the military condemned the attack, which they described as “terrorism,” while the government pledged it will “strike with an iron fist those who threaten national security.”

“The presidency affirms it will not allow the terrorism that Egyptians defeated in the 1980s and 1990s to show its ugly face again,” the army-installed presidency said.

The United States also condemned the “heinous” attack, State Department spokeswoman Jen Peski said. “The perpetrators of this heinous attack must be brought to justice,” she said.

State news agency MENA said police sealed off access roads to the interior ministry in central Cairo after the blast.

An AFP correspondent at the site said several cars were damaged in the explosion, which also caused massive damage to the front of one building.

“The bombing should be condemned irrespective of the perpetrators,” the Anti-Coup Alliance said, citing one of its senior members.

Hundreds of Islamists were killed in Cairo’s Rabaa al-Adawiya and Nahda squares when police stormed the protest camps on August 14.

Morsi’s supporters were demanding his reinstatement after the military overthrew him following massive street protests against his one-year rule.

More than 100 policemen have been killed in violence during and after the crackdown.

The Brotherhood and allied groups say they are committed to peaceful protests, but analysts say rogue Islamists could start a campaign of bombings and attacks in the country.

“There is a security crackdown now and the crisis is quite young,” said Issandr El Amrani, the North Africa project director for the International Crisis Group.

“But it is obvious that there is a sentiment among some Islamists that there is no negotiating with this regime and there have been quite public calls for violence.”

The military and police are already battling an insurgency in the Sinai peninsula, a haven for hardcore gunmen inspired by the Al-Qaeda militant group.

On Thursday, militants killed a policeman in Sinai and shot dead a soldier near the Suez Canal city of Ismailiya, security sources said.

Attacks have also taken place in the populated Nile Delta and in Cairo.

Two civilians were wounded in a blast on Monday when assailants hurled a bomb at a police station in Cairo.

On July 24, a policeman was killed when a bomb went off at station in the Nile Delta city of Mansoura.

Egypt faced a wave of bombings and shootings in the 1990s linked to an attempted Islamist insurgency that also targeted the then interior minister in a failed assassination attempt.

Security services crushed the militants, killing or imprisoning the commanders of the Islamist groups. – Rappler.com