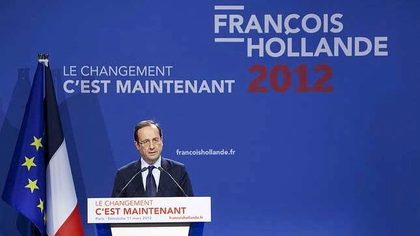 PARIS, France – Socialist champion Francois Hollande stamped his authority on the French presidential race Sunday, April 22, winning the first round of polling and setting up a May 6 run-off with incumbent Nicolas Sarkozy.

Hollande won between 28% and 29% of the vote in the first round, to Sarkozy’s 25.5 to 27, according to estimates compiled from ballot samples by several polling agencies and obtained by AFP from multiple sources.

But the surprise package was the far-right anti-immigrant candidate Marine Le Pen, who won between 18% and 20% — her National Front party’s best showing which complicated forecasts for the second round.

Sarkozy is the only incumbent French president to lose a first round-vote in modern French history and opponents of all stripes queued up to pronounce his political obituary in live broadcasts and speeches to supporters.

Marine Le Pen’s father, National Front founder Jean-Marie Le Pen, refused to say who he would vote for in the second round now that his daughter has been eliminated, but added: “I think Sarkozy is finished.” Sarkozy’s camp put a brave face on the defeat, insisting that with the votes of the Le Pen camp and that of centrist Francois Bayrou the right had not had a bad night and that Sarkozy would bounce back before May 6.

“The message from the French, which we heard loud and clear, was that this was a vote in a time of crisis,” said Jean-Francois Cope, leader of Sarkozy’s right-wing UMP and a possible future presidential candidate.

“From tomorrow morning, we will no longer be in a case of 9 candidates against Nicolas Sarkozy, but we will be one-to-one, Nicolas Sarkozy against Francois Hollande … then I think the match will be different,” he said.

Far left candidate Jean-Luc Melenchon was beaten into fourth place with around 11.7%, a disappointment for his supporters after a barnstorming campaign, and called on the left to unite to oust Sarkozy.

Turnout was high at at least 80%: down on the 84% turnout of 2007 but up significantly on the 72% of 2002 and belying fears that a low-key campaign would be capped by mass abstention.

The left has not won a presidential election in a quarter of a century, but with France mired in low growth and rising joblessness, opinion polls had long predicted that the left would beat the right-wing incumbent.

Hollande says Sarkozy has trapped France in a downward spiral of austerity and job losses, while Sarkozy says his rival is inexperienced and weak-willed and would spark financial panic through reckless spending pledges.

The eurozone debt crisis and France’s sluggish growth and high unemployment have hung over the campaign, with Sarkozy struggling to defend his record and Hollande unable to credibly promise spending increases.

“I have never missed a vote, but this time I feel little enthusiasm for the election,” said 62-year-old retired high school teacher Isabelle Provost as she emerged into bright Paris sunshine after casting her ballot.

“Economically there is little difference between the two main candidates,” she said, echoing the sentiment of many others of the right and the left.

Opinion polls and campaigning were banned from midnight on Friday, and will now resume on Monday in the build-up to the May 6 run-off, which Hollande has hitherto been predicted to win by around 55% to 45.

Sarkozy and Hollande face a two-week scramble for the line, including a head-to-head televised debate that could be the incumbent’s last chance to change his fortunes. – Agence France-Presse