Feb 1, 2014 2:07 PM PHT
Facebook Twitter Copy URL
Copied
Thailand's Democrat Party stands accused of turning its back on democracy by refusing to contest controversial elections to be held on Sunday 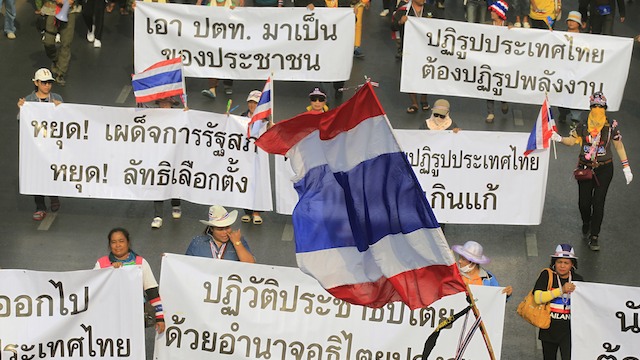 BANGKOK, Thailand – After two decades of election defeats, Thailand’s oldest political party stands accused of turning its back on democracy by refusing to contest controversial elections to be held on Sunday, February 2. (READ: Divided Thailand set for chaotic election)

The elite-backed opposition Democrat Party has joined forces with anti-government supporters who are threatening to disrupt the polls and want Prime Minister Yingluck Shinawatra to step down to make way for an unelected “people’s council”.

“The party is turning away from democracy,” said Pavin Chachavalpongpun, associate professor at the Centre for Southeast Asian Studies at Japan’s Kyoto University.

The Democrats are “trying to find a short cut” to power, he added, noting that on the several occasions in the past two decades when they did take office it was with the support of the military.

The opposition accuses Yingluck’s Puea Thai party of corruption and buying votes, and says she is a puppet for her elder brother, fugitive former premier Thaksin Shinawatra – accusations she denies.

The Democrats, who are popular in Bangkok and parts of southern Thailand, argue that elections will not end a cycle of political violence in the kingdom stretching back to around the time of a military coup in 2006 that ousted Thaksin from power.

“For the country, the elections could not solve the problems and conflicts that we are facing,” Democrat Party leader Abhisit Vejjajiva told Agence France-Presse.

“A reform process needs to be initiated so that people can be confident that come election time, and after the elections, an elected government does not abuse power in the way that it has done over the last couple of years,” he said.

Helped by support among rural voters who benefited from their policies, pro-Thaksin parties have won every election in more than a decade, most recently in 2011 with 265 seats against 159 for the Democrats.

Critics say the Democrat Party missed a golden opportunity to increase its support base owing to public anger over corruption allegations and a failed amnesty bill that could have allowed Thaksin to return without going to jail.

“They failed in their role of seizing on the moment when they could have really gained in votes.”

The Democrats also boycotted an election in 2006, contributing to the political uncertainty that precipitated the coup that toppled Thaksin.

They last came to power in 2008 by parliamentary vote after a court stripped Thaksin’s allies of power, angering his “Red Shirts” supporters who launched street protests in 2010 that sparked clashes and a military crackdown that left dozens dead.

Abhisit, who was prime minister at the time, faces a murder charge in connection with those deaths.

‘Not in the spirit of democracy’

In December of last year, Democrat lawmakers resigned en masse from parliament to join the protests against Yingluck.

After the premier called snap elections in the hope of defusing the crisis, the Democrats announced they would not be taking part. (READ: Thai PM calls polls; 140,000 join protest)

“In my opinion, it is a mistake in terms of the spirit of democracy – it was the wrong decision,” said Gothom Arya, an associate professor at Bangkok’s Mahidol University.

“They should fight on the parliamentary stage.”

Abhisit, the British-born scion of an influential family, denied that his party was giving democracy the cold shoulder.

“We have participated in the democratic process throughout our history,” said the Oxford-educated career politician, whose name means “privilege”.

“But we have been faced with the situation where we now have an elected majority that does not respect the law, wants to put itself above the law, refuses to accept the verdicts of the courts, is engaged in abuses of power and intimidation of political opponents,” he said.

The Democrats pushed Yingluck to stand down to make way for an interim government. When that failed, they signalled they would be ready to participate in a delayed election, but the premier pushed ahead with Sunday’s polls.

Now, Democrat MPs face a dilemma: under election rules if they do not vote themselves Sunday they could lose their entitlement to run in future polls. Voting would defy their own boycott, however.

Abhisit himself said that the polls were “unconstitutional” and pledged not to cast his ballot in an announcement on his Facebook page on the eve of the election.

“It’s a very tricky situation that the Democrats find themselves in,” said Streckfuss. “I think they really thought the election date would be changed. And they didn’t have a plan B.” – Rappler.com