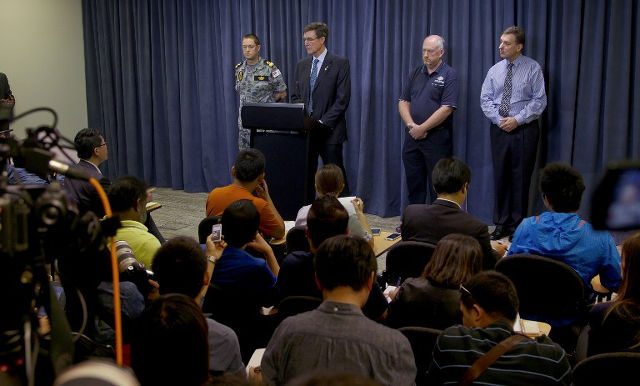 Facebook Twitter Copy URL
Copied
(UPDATED) The search team now has a narrowly-focused underwater search area, with signals bringing encouragement 'that we are very close to where we need to be.'

PERTH, Australia (UPDATED) – An Australian navy ship has detected new signals “consistent” with aircraft black boxes, a senior official said Monday, describing it as the “most promising lead” so far in the search for MH370.

Search chief Angus Houston said the team now had an underwater search area which was narrowly focused and that the signals had left them “encouraged that we are very close to where we need to be.”

“The towed pinger locator deployed from the Australian defense vessel Ocean Shield has detected signals consistent with those emitted from aircraft black boxes,” the former Australian defence chief who is leading the search coordination body said, though he emphasised that further confirmation was needed.

“We have not found the aircraft yet, we need further confirmation,” he said of the Boeing 777 which vanished on March 8 with 239 people on board.

One of the contacts lasted two hours and 20 minutes, Houston said, with the second contact lasting for 13 minutes.

“It could take some days before information is available to establish whether these detections can be confirmed as being form MH370,” he added. (WATCH: #TalkThursday: The Search for MH370)

Houston’s Joint Agency Coordination Centre (JACC) said that in total up to 9 military planes, 3 civil planes and 14 ships were to take part in Monday’s search operation.

The search area was expected to be approximately 234,000 square kilometers on Monday, JACC said, predicting good weather throughout the day in a region of the Indian Ocean around 2,000 kilometers (1,250 miles) northwest of Perth.  – Rappler.com