Apr 20, 2014 7:35 PM PHT
Facebook Twitter Copy URL
Copied
The pope also called for peace in Syria, and prayed for the people struck by epidemic in Africa and internal conflict elsewhere in the world 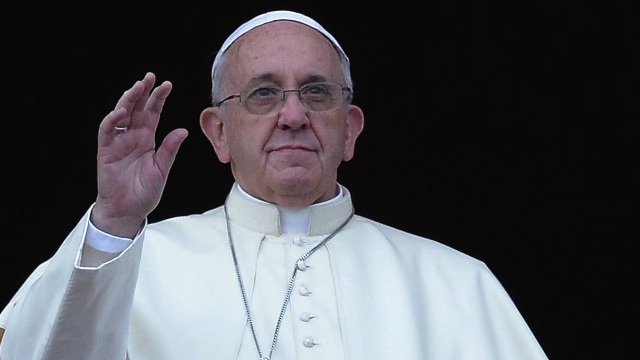 VATICAN CITY – Pope Francis urged the international community to “prevent violence” in Ukraine in his Easter Sunday message on April 20, after pro-Russian insurgents in the east of the country reported 4 people killed in a gunbattle.

“We ask you to enlighten and inspire the initiatives that promote peace in Ukraine,” the Catholic leader said in his prayer for the holiday, which this year coincides with Easter in the Orthodox calendar.

Francis asked that “all those involved, with the support of the international community, will make every effort to prevent violence and in a spirity of unity and dialogue, chart a path for the country’s future”.

The Vatican said 150,000 people crowded into St Peter’s Square and the main avenue leading up to it for the Easter mass and the pope’s traditional “Urbi et Orbi” blessing to the city of Rome and to the world.

Swiss guards in multi-colored uniforms and cardinals in scarlet robes could be seen at the ceremony and the pope addressed the crowds from the same Vatican balcony where he first emerged following his election last year.

The Argentine pope also urged “reconciliation and fraternal concord” in Venezuela, where a Vatican envoy has taken part as a moderator in negotiations to end a stand-off between the government and the opposition. (READ: Venezuela in new crisis talks)

In Syria, where a raging three-year conflict is estimated to have killed more than 150,000 people, the pope said it was time for warring sides to “boldly negotiate the peace long awaited and long overdue”.

The pope also prayed to “enable us to care for our brothers and sisters struck by the Ebola epidemic in Guinea Conakry, Sierra Leone and Liberia”, saying the disease had spread through “neglect and dire poverty”.

Dozens of people have died this year in West Africa of the virus for which there is no vaccine or cure and which can only be stopped by isolating suspected cases and quarantining anyone in contact with them. (READ: Ebola has killed 61 in Guinea since January: official)

Francis also prayed for an end to “brutal terrorist attacks” in Nigeria and to the ongoing violence in Central African Republic and South Sudan.

He also pleaded for Middle East peace negotiations, which have been overshadowed in recent days by clashes between Palestinian protesters and Israeli police in the Al-Aqsa compound in Jerusalem’s Old City.

This is the second Easter as pope for Francis – the first pontiff from Latin America and the first non-European on St Peter’s throne in 1,200 years.

At an Easter vigil on Saturday, he asked Catholics to bring “the fire which Jesus has kindled in the world… to all people, to the very ends of the Earth”.

On Good Friday, Francis attended a traditional torch-lit ceremony at the Colosseum in Rome where he called for help to “abandoned people” and railed against “the monstruosity of humankind”.

Easter this year coincides with the Orthodox calendar, and Ukraine’s government said it was holding off on a confrontation with pro-Russian gunmen in eastern Ukraine until after the Easter holidays.

But 4 people were reported killed in a gunbattle at a barricade in the volatile eastern Ukrainian town of Slavyansk on Sunday, a local leader told journalists.

And there was a bitter war of words between religious leaders, with Kiev’s Patriarch Filaret thundering that Russia was an “enemy” whose “attack” was doomed to failure because it was evil and against God’s will.

In Moscow, Russian Orthodox Patriarch Kirill prayed for God in turn to put “an end to the designs of those who want to destroy Holy Russia” and said Ukraine was “spiritually and historically” at one with Russia.

Ukraine’s Christian believers are divided between followers of the Kiev and Moscow patriarchates and there is a minority belonging to the Greek Catholic Church which recognises the authority of the Vatican. – Rappler.com