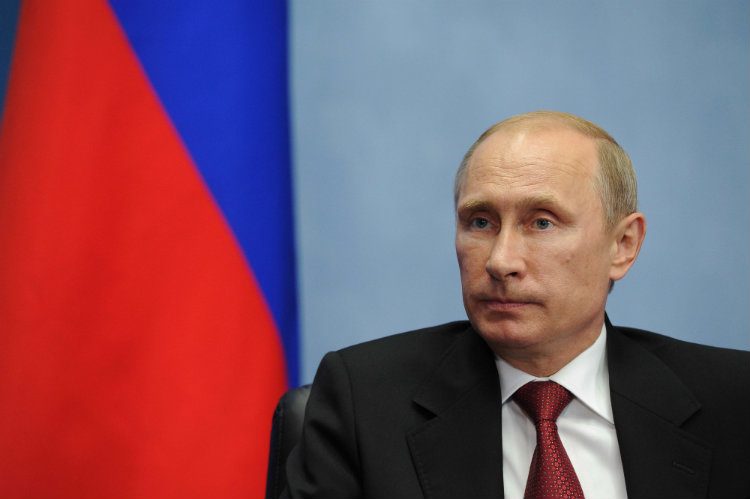 SAINT PETERSBURG, Russia – Ukraine’s interim leaders were set to join prayers for peace Saturday, May 24, on the eve of a crucial presidential vote that Russian President Vladimir Putin has pledged to respect.

Putin has in the past given only grudging backing to the election but on Friday, May 23, said he was prepared to work with whoever was elected Ukraine’s president in Sunday’s vote.

“We understand that the people of Ukraine want their country to emerge from this crisis,” he said at an economic forum in his home town of Saint Petersburg.

“We will treat their choice with respect.

“We are today working with those people who control the government and after the election we will of course work with the newly elected authorities.”

The Russian leader warned that Ukraine had descended into all-out civil war after a bloody upsurge in separatist violence.

Seven people were killed in fighting between rebels and defence forces outside the eastern industrial hub of Donetsk on Friday, a day after the deaths of 18 soldiers in the heaviest loss for the Ukraine military since the conflict began.

Interim President Oleksandr Turchynov called on voters to turn out in force Sunday to prevent Ukraine “being turned into a part of a post-Soviet empire” by a weeks-long insurgency that Kiev and the West say is being orchestrated by Russia.

On Saturday the country’s leaders will take part in prayers for peace in Kiev at 1:00 pm (1000 GMT). Other prayers are expected to take place elsewhere.

The authorities are mobilizing tens of thousands of police and volunteers to try to ensure security on polling day, although the pro-Russian separatists are threatening to disrupt the vote in areas under their control in the industrial east.

Sunday’s vote is seen as the most crucial since Ukraine’s independence in 1991, with the country facing the threat of partition and teetering on the brink of economic collapse.

Billionaire chocolate baron Petro Poroshenko is the favourite, enjoying a near 30-point lead over former prime minister Yulia Tymoshenko, but opinion polls say the vote is likely to go to a runoff in June.

In another move that could ease tensions ahead of the vote, Putin this week ordered the withdrawal of some 40,000 troops whose presence along Ukraine’s border was causing jitters particularly among former Soviet satellites.

The head of Russia’s army said Friday the pullback could take at least 20 days.

The United States responded to Putin’s comments with extreme caution, with White House spokesman Jay Carney saying that “we would welcome an indication from Russia that they would accept the results of a free and fair and democratic election in Ukraine.”

Ukrainian Foreign Minister Andriy Deshchytsya said Putin’s words needed to be followed by “specific actions,” adding that Moscow appeared to be taking “into consideration possible introduction of (further economic sanctions) by the EU and the United States.”

Washington and its European allies have threatened more sanctions if Moscow disrupts the vote, adding to a series of punitive measures imposed after Russia’s annexation of the Crimean peninsula in March.

But Putin brushed off the threats, saying the sanctions will “boomerang” on the West.

He accused Washington of choreographing the February ouster of Kremlin-backed president Viktor Yanukovych who fled in the bloody climax of months of protests sparked by his decision to scrap a pact forging closer ties with Europe.

He described it as a “coup” that resulted in chaos and “full-scale civil war.”

But in the restive east, violence flared early Friday when militants armed with heavy machine guns and backed by at least one armoured vehicle battled a volunteer force attached to the Ukrainian army.

An AFP photographer saw seven bodies near the village of Karlivka northwest of Donetsk. Four of the dead appeared to be rebels and the others members of a battalion that has backed government troops since the fighting first broke out in early April.

Eighteen soldiers were killed Thursday in separate attacks in Donetsk and neighbouring Lugansk in the heaviest loss for the military since launching its “anti-terrorist” operation in mid-April.

About 150 people have been killed in the east since then, according to an AFP tally based on UN and Ukrainian government figures.

The election is viewed as crucial to give people a chance to unite behind a legitimate leader after months of unrest that have exposed a deep cultural divide between Ukraine’s Russian and Ukrainian speakers.

But Kiev’s interim leaders admit they will have a tough time making sure polling goes smoothly in the restive eastern provinces, where guerrillas have seized a number of election commissions.

The Ukrainian authorities are planning to deploy more than 55,000 police and 20,000 volunteers on polling day.

The Organisation for Security and Cooperation in Europe, which is sponsoring a peace roadmap for Ukraine that includes so-called national unity talks, will have around 1,000 observers on the ground.

“The election will take place under any circumstances and we will get a legitimately elected president,” said deputy Central Election Commission chief Andriy Magera. – Rappler.com