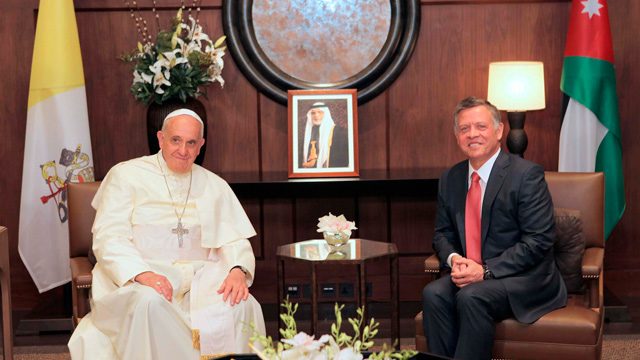 Facebook Twitter Copy URL
Copied
Pope Francis makes an urgent plea Saturday, May 24, for peace in war-torn Syria as he kicks off a 3-day pilgrimage to the Middle East

AMMAN, Jordan – Pope Francis made an urgent plea Saturday, May 24, for peace in war-torn Syria as he kicked off a 3-day pilgrimage to the Middle East.

And he called for religious freedom to be upheld throughout a region ravaged by war and bloodshed, where a dwindling Christian population faces daily persecution.

As he walked off the plane onto a red carpet at Amman airport, his white robes flapping in the hot desert wind, he was greeted by officials and two children dressed in traditional costume who handed him bouquets of irises, the national flower of Jordan.

At a stadium in the city, where Francis will celebrate an afternoon mass, thousands of people were packing into blue and red chairs in front of a large altar, behind which hung posters of John Paul II and John XXIII, who were made saints this month.

The 3-day tour, which has been billed as a “pilgrimage of prayer,” will also take Francis to Israel and the Palestinian territories on a landmark first visit aimed at boosting ties with Muslims and Jews, as well as easing an age-old rift within Christianity.

“Lasting peace for the entire region… requires that a peaceful solution be found to the crisis in Syria, as well as a just solution to the Israeli-Palestinian conflict,” the pope said at the royal palace, ahead of a meeting with Syrian refugees.

Syria’s civil war, which began in 2011, is estimated to have claimed at least 162,000 lives and forced another 2.7 million people to flee to neighbouring countries, 450,000 of them Christians.

Jordan’s King Abdullah II told Francis his “humanity and wisdom” could contribute to easing the crisis confronting Syrian refugees and the burden on hosts countries like Jordan.

As his white car drove through the streets towards the royal palace, well-wishers waved Jordanian and Vatican flags and held up banners welcoming him, under the watchful eye of security guards.

Later Saturday, Francis was to head to a site on the River Jordan where many believe Jesus was baptized by John the Baptist. There he will hear first-hand accounts of the suffering in Syria from some of the 600,000 refugees hosted by Jordan.

The 77-year-old pontiff also urged respect for religious freedom in a region where the Holy See called for an end to the ongoing persecution of Christians.

“Religious freedom is, in fact, a fundamental human right and I cannot fail to express my hope that it will be upheld throughout the Middle East and the entire world,” he said.

Although Christians were a minority within the region, their contribution was “significant and valued,” he said.

Thousands of Christians around the world are killed every year because of their faith, and persecution has become more widespread in countries torn by conflicts involving radical Islamists, including Syria and Iraq.

Last year, the numbers of Christians killed for their faith doubled to 2,123, said a report by Open Doors, a non-denominational group supporting oppressed Christians.

Ahead of his arrival in a region roiled by political and religious division, the Argentine pope said he felt like the biblical prophet Daniel heading to the lions’ den.

“I feel like Daniel, but now I know that the lions don’t bite,” he told reporters travelling with him on his plane.

Entering Amman’s main stadium on open-topped white jeep, Francis was met by raucous applause as he smiled and waved at the crowds, his white skullcap flying off in the breeze.

Babies and toddlers were passed through the crowd to be held by him for a moment and blessed, as thousands of balloons were released into the air and an Arabic pop song echoed through the stadium.

“This pope is special. He only wants to see the poor and the diseased. He is the protector of the helpless,” said 77-year-old Sister Rachel, highlighting his dedication to the downtrodden.

Early on Sunday, May 25, the pope will make a short helicopter ride across the Jordan River to Bethlehem, where he will begin a two-day visit to the Palestinian territories and Israel.

Francis said the main reason for the trip was a historic meeting in Jerusalem with the Orthodox Patriarch of Constantinople, Bartholomew I, and “to pray for peace in that land, which has suffered so much.” – Rappler.com