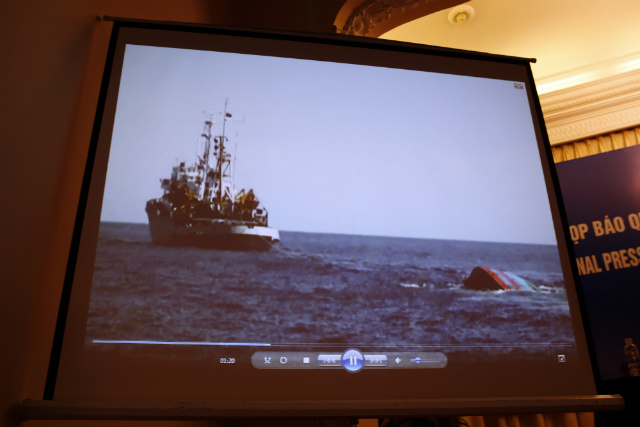 MANILA, Philippines – In the face of video showing a Chinese ship sinking a Vietnamese boat, China said Vietnam provoked it first, and in fact rammed the Asian giant’s ships 1,400 times in the disputed South China Sea.

The Chinese Embassy in Manila sent this statement to Filipino reporters on Monday, June 9, as the Philippines and Vietnam try to “strengthen friendship” to ease tension in the South China Sea – the East Sea in Vietnam, and the West Philippine Sea in the Philippines.

The statement sent by the embassy was published on Sunday, June 8, by the Chinese Foreign Ministry in Beijing.

The Chinese Foreign Ministry claimed that as of 5 pm on Saturday, June 7, “there were as many as 63 Vietnamese vessels in the area at the peak, attempting to break through China’s cordon and ramming the Chinese government ships for a total of 1,416 times.”

China wrote: “Shortly after the Chinese operation started, Vietnam sent a large number of vessels, including armed vessels, to the site, illegally and forcefully disrupting the Chinese operation and ramming the Chinese government vessels on escort and security missions there. In the meantime, Vietnam also sent frogmen and other underwater agents to the area, and dropped large numbers of obstacles, including fishing nets and floating objects, in the waters.”

It added, “Such actions also undermined the freedom and safety of navigation in these waters, and damaged peace and stability in the region.”

“While illegally and forcefully disrupting the normal operation of the Chinese company on the sea, Vietnam also condoned anti-China demonstrations at home. In mid-May, thousands of lawless elements in Vietnam conducted beating, smashing, looting and arson against companies of China and several other countries. They brutally killed 4 Chinese nationals and injured over 300 others, and caused heavy property losses,” it said.

Explaining its response to Vietnam’s “provocation,” China pointed out that Vietnam and China have yet to delimit, or draw a boundary between, their overlapping exclusive economic zones (EEZs).

Under the UNCLOS, the EEZ is an area 200 nautical miles from a coastal state’s baselines, or edges, within which the state has the sovereign rights to explore and exploit, and conserve and manage natural resources, among others.

The rising superpower added: “In the face of Vietnam’s provocative actions on the sea, China exercised great restraint and took necessary preventive measures. Chinese government ships were dispatched to the site for the purpose of ensuring the safety of the operation, which effectively safeguarded the order of production and operation on the sea and the safety of navigation. In the meantime, since 2 May, China has conducted over 30 communications with Vietnam at various levels, requesting the Vietnamese side to stop its illegal disruption.”

“Regrettably, however, the illegal disruption of the Vietnamese side is still continuing,” it said.

Vietnam – which is dwarfed by China economically speaking – for its part said it is China that threatens “peace, stability, and security and freedom of navigation and aviation” in the disputed sea.

To back this claim, Vietnam released video images, shot from a nearby Vietnamese vessel, that show a much larger Chinese ship racing after a small wooden Vietnamese fishing boat. The footage showed the Chinese ship ploughing into the Vietnamese boat, and causing it to tip over and sink.

On Tuesday, June 3, Vietnamese state media reported that China fired water cannon at a Vietnamese vessel and damaged another of Hanoi’s ships.

Incidents such as these have prompted closer cooperation between the Philippines and Vietnam.

On Sunday, Filipino and Vietnamese troops played volleyball and football in a contested South China Sea archipelago – a landmark act of sports diplomacy that both sides said could ease territorial tensions.

On Thursday, June 5, Philippine Foreign Secretary Albert del Rosario told reporters that Vietnam is reviewing its options in settling the South China Sea dispute – including a possible arbitration case like the one filed by the Philippines.

“They said that they are considering this and that they may try to consult with us,” Del Rosario said as he recounted a recent discussion with Vietnamese diplomats. – with reports from Agence France-Presse/Rappler.com