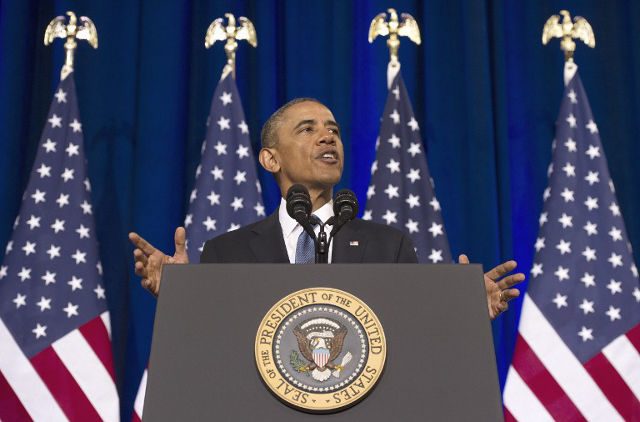 Facebook Twitter Copy URL
Copied
(UPDATED) 'We are the only developed country on earth where this happens, and it happens now once a week,' says US President barack Obama after the latest US shooting incident

WASHINGTON DC, USA (UPDATED) – US President Barack Obama Tuesday, June 10, called for national “soul searching” over gun violence, warning that mass shootings were “off the charts” in a way no other advanced country would tolerate.

Obama made the statement at the White House, hours after a gunman shot and killed a 14-year-old student at Reynolds High School in Oregon, in the latest in a spate of US shootings.

The President vented frustration and disbelief that there was no political momentum for gun reform in the wake of a new spate of mass shootings, in impassioned remarks likely to touch off a new row with the powerful firearms lobby.

“We are the only developed country on earth where this happens, and it happens now once a week,” he said.

“There is no place else like this!” he said, adding that America should be ashamed it could not enact even the mildest gun reforms.

Obama said the “biggest frustration” of his presidency so far was that Washington had not even taken “basic steps” to keep guns out of the hands of people that can do “unbelievable damage.”

The President tried and failed to introduce a ban on assault weapons and to require more stringent background checks for gun buyers after the Newtown massacre in which 20 children and 6 adults were killed in December 2012.

The measures foundered against the strong support for gun rights in the US Congress and the power of the firearms lobby.

Obama used his executive power to make some more minor changes designed to stem violence, but implicitly admitted his impotence on the issue in an answer to a question about gun rights at a Tumblr online forum on Tuesday.

“Our levels of gun violence are off the charts, there is no advanced developed country on Earth that would put up with this,” Obama said.

The President said he respected gun rights enshrined in the US Constitution, but said the idea that it was impossible to introduce background checks for gun buyers made no sense.

“The country has to do some soul searching about this. This is becoming the norm, and we take it for granted in ways that, as a parent, are terrifying to me,” Obama said.

The President said he had found it “stunning” that new guns laws could not pass after the cold blooded horror of the Newtown massacre in Connecticut which traumatized the country.

He said that the only way that the current status quo would change would be if public opinion influenced lawmakers, who he said were “terrified” of the powerful National Rifle Association (NRA) lobby group.

No ‘monopoly’ on crazy people

He also took aim at the argument often advanced by gun rights groups, that the real root of mass shootings was the lack of widespread mental health treatment.

“The United States does not have a monopoly on crazy people,” Obama said.

“It’s not the only country that has psychosis, and yet we kill each other in these mass shootings at rates that are exponentially higher than any place else. What’s the difference? The difference is that these guys can stack up a bunch of ammunition in their houses.”

In the shooting in Troutdale, Oregon, a gunman shot and killed a student, identified as Emilio Hoffman. The gunman, who has yet to be identified, also died, though it was unclear if he took his own life or was shot by police responding to the incident.

It was the fourth incident in 3 weeks in the western US.

On May 23, a student with mental problems, the son of a Hollywood director, went on a gun rampage at a college campus in Santa Barbara, north of Los Angeles, killing 6 people and then himself.

On June 5, a gunman killed one person and injured two others on on a college campus in the northwestern city of Seattle, in a spree the local mayor denounced as part of America’s “epidemic of gun violence.”

Then on Sunday, a couple with possible links to anti-government militia shot dead two police officers execution-style in a Las Vegas pizza restaurant, before killing another civilian nearby and then themselves.

Obama said he was willing to work with anyone to enact gun legislation. But there is no prospect, especially in mid-term congressional election year, of a reform movement emerging anytime soon. – Rappler.com