Malaysia plane ‘shot down,’ 298 on board 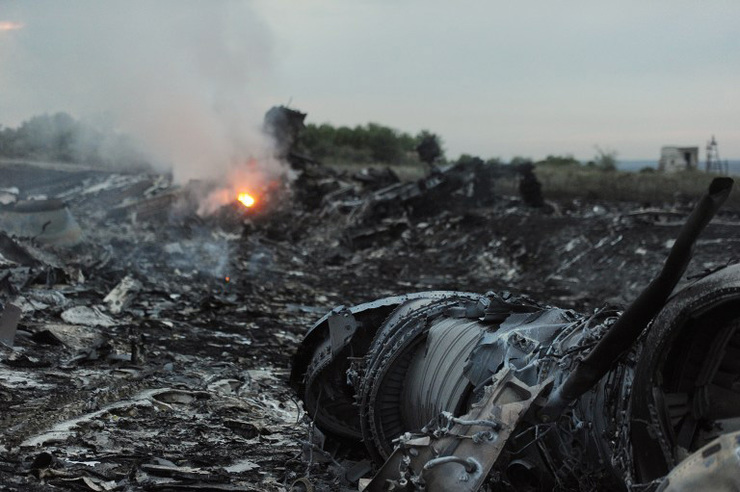 Malaysia Airlines said it had “lost contact” with the Boeing passenger liner Thursday night, which Ukrainian officials said had come down in a rebel-held zone in the Donetsk region. The airline was still reeling from the disappearance of flight MH370, said on its Twitter account.

There were 298 people, including 154 Dutch nationals and 3 Filipinos, on board the Malaysia Airlines flight that crashed in strife-torn eastern Ukraine on Thursday, an official from the carrier said early Friday.

“There were 283 passengers and 15 crew members on board the plane,” Malaysian Airlines vice president Huib Gorter told reporters at a press conference at Amsterdam’s Schiphol airport from where the doomed flight had taken off.

The flag carrier, still reeling from the mysterious March 8 disappearance of flight MH370, said the aircraft was travelling from Amsterdam on an overnight flight to Kuala Lumpur with 280 passengers and 15 crew.

Malaysia Airlines has lost contact of MH17 from Amsterdam. The last known position was over Ukrainian airspace. More details to follow.

Ukrainian President Petro Poroshenko said the jet may have been shot down.

“We do not exclude that the plane was shot down and confirm that the Ukraine Armed Forces did not fire at any targets in the sky,” Poroshenko said in a statement posted on the president’s website.

Regional officials in Donetsk confirmed the plane had come down near the town of Shaktarsk.

“The number of dead is not yet known,” the administration said in a statement.

Emergency services were rushing to the scene, a security source told Interfax-Ukraine.

US stocks fell sharply following reports the Malaysia Airlines plane had been shot down, while Britain’s Foreign Office said it was “working urgently to find out what’s happened.”

The incident comes just months after Malaysia’s Flight MH370 disappeared on March 8 with 239 on board. The plane diverted from its Kuala Lumpur to Beijing flight path and its fate remains a mystery despite a massive aerial and underwater search.

The reported crash came after Kiev accused Russia of downing a Ukrainian military plane on a mission over the east of the country, stoking tensions in the growing conflict on the edges of Europe that has claimed over 600 lives.

The allegation came a day after the US and EU bolstered sanctions against Russia over its perceived support of the separatist insurgency in the ex-Soviet state.

Moscow condemned the punitive measures against it as “blackmail” and warned of retaliatory actions against Washington.

In the first direct claim of a Russian attack on Ukrainian forces, Kiev said a Russian airforce jet shot down a Ukrainian warplane Wednesday evening — before the fresh round of Western sanctions were announced — as it was carrying out its duties.

The pilot of the Su-25 plane managed to eject and was rescued by Kiev forces, Ukraine’s National Security and Defence Council said.

The dramatic developments on the ground came alongside a major diplomatic fallout over fresh Western sanctions that Washington and Brussels hope will force Moscow to help halt the conflict.

In a tough move that left the EU trailing in his wake, US President Barack Obama took a swipe at major players in Russia’s finance, military and energy sectors in sanctions imposed Wednesday.

The Russian foreign ministry reacted in a furious statement: “We do not intend to tolerate blackmail and reserve the right to take retaliatory measures” against the US.

In eastern Ukraine fierce fighting between government forces and pro-Moscow rebels has intensified in recent days with some 55 civilians killed since the weekend.

The fighting forced more than a dozen Ukrainian border guards to flee into Russia seeking medical help with one dying from his injuries, the Russian authorities said.

Germany and France have been spearheading a push to revive talks between Kiev and the rebels over a potential ceasefire but attempts to hold a Skype videoconference fell through Tuesday.

Ukrainian forces made a string of major gains after Poroshenko tore up an unsuccessful ceasefire earlier this month, but progress has slowed since rebels retreated into two major regional centres where they have pledged to fight to the end.