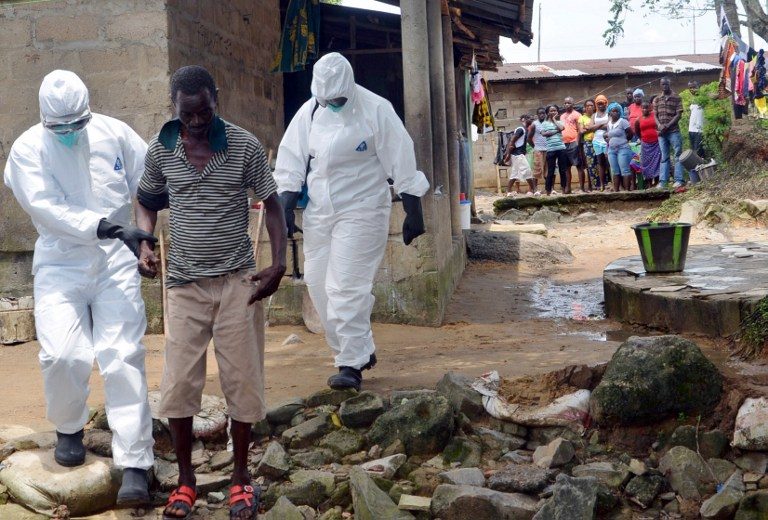 Facebook Twitter Copy URL
Copied
A total of 1,427 people have died from Ebola since the start of the year, with 2,615 people infected

ACCRA, Ghana – The Ebola epidemic gripping West Africa will get worse before it gets better, the head of the United States’ top health body has warned, as health ministers from affected nations held crisis talks.

The director of the Centers for Disease Control and Prevention, Tom Frieden, said there was no quick fix to what the World Health Organization has called an “unprecedented” outbreak and called for “urgent action”.

A total of 1,427 people have died from Ebola since the start of the year, with 2,615 people infected. Most of the deaths have been in Sierra Leone, Liberia and Guinea, with a handful of cases in Nigeria. (FAST FACTS: Deadliest Ebola outbreaks since 1976)

But the WHO, medical charities treating the sick and dying and others believe those figures are likely to be far too low because of community resistance to outside medical staff and a lack of access to infected areas.

Frieden told a news conference in the Liberian capital, Monrovia, on Wednesday evening: “The cases are increasing. I wish I did not have to say this but it is going to get worse before it gets better.”

His comments, which follow other warnings about the longer-term threat posed by the outbreak and the need for a better global response, came as health ministers of the West African regional bloc ECOWAS gathered in Ghana. (READ: ‘Perfect storm’ for Ebola to spread – virus pioneer)

The Economic Community of West African States said the talks in Accra, aimed to strengthen its members’ response to the epidemic.

Ebola, which claimed the life of one ECOWAS official in Nigeria’s financial capital, Lagos, was “a threat to regional and global public health safety as well as the economic and social security of the affected countries”, it said in a statement.

There has been mounting concern about the effect of the most lethal outbreak of the tropical virus in history after airlines stopped international flights to the crisis zone.

On Wednesday, Air France became the latest carrier to announce a suspension of its services to Sierra Leone, while British Airways said it was stopping its flights to Freetown and Monrovia until next year.

Royal Air Morocco is now the only airline providing a regular service for both capitals, although the company said that flights were only about 10 percent full from Casablanca.

The United Nations’ envoy on Ebola, David Nabarro, this week criticised airlines for scrapping flights, warning that Ebola-hit countries faced increased isolation and made it harder for the UN to carry out its work.

Liberia has been worst hit by the outbreak, with 624 deaths recorded. Sporadic violence, including against hospitals treating Ebola patients, has been seen and some areas of the city placed under quarantine.

Elsewhere, there have been warnings of food shortages in affected countries.

Last week, the Democratic Republic of Congo said 13 people had died with symptoms of an unspecified haemmorrhagic fever. It later confirmed two Ebola cases but said they were unrelated to the West African epidemic.

The UN on Wednesday announced that it was giving Kinshasa $1.5 million (1.1. million euros) to help the country fight the disease, which has seen seven outbreaks since it was first identified in the country in 1976.

The WHO has said that it was encouraged by the response from Guinea and Nigeria, where far fewer cases of Ebola have been recorded than in Sierra Leone and Liberia and public awareness about the virus was higher.

Five people have died from Ebola out of 13 confirmed cases, all of them in the financial capital, Lagos, while seven have been successfully treated and released from hospital. And another victim was confirmed to have died in the oil city of Port Harcourt on Thursday.

Nigeria’s health minister Onyebuchi Chukwu, however, warned that there was no room for complacency, despite only one patient remaining in isolation with the virus.

“Nigeria has been successful at containment. But have we eliminated the disease? No,” he told reporters, likening the situation to trapping a wild animal in a cage. – Rappler.com