China insists on right to choose candidates for HK leader 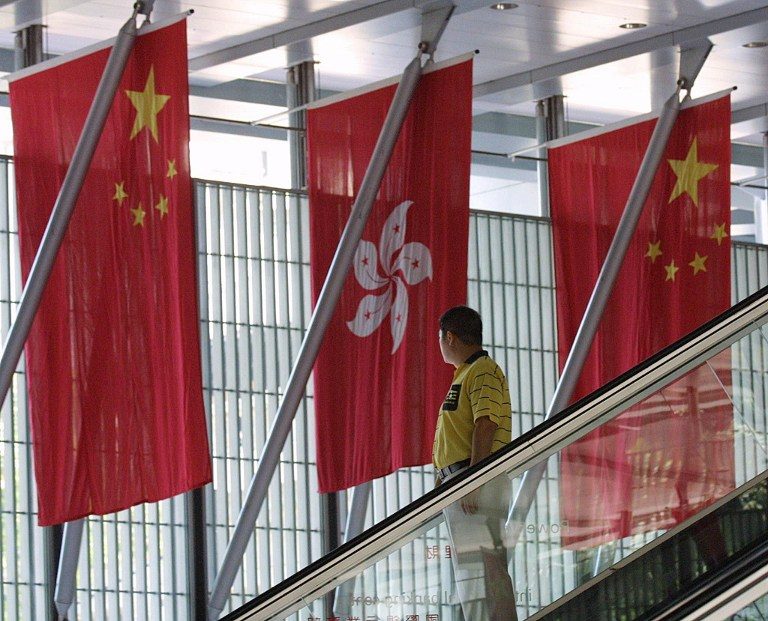 Facebook Twitter Copy URL
Copied
(UPDATED) The pro-democracy group Occupy Central said it would go ahead with its threat to take over the city's Central financial district in protest, at an unspecified date

HONG KONG, China (3rd UPDATE) – China Sunday, August 31, announced rules giving it control over who can stand in Hong Kong’s next leadership election, triggering tears and fury in the city where democracy activists vowed to stage a mass sit-in.

The standing committee of the National People’s Congress (NPC), China’s rubber-stamp parliament, decided that the city’s next chief executive will be elected by popular vote in 2017, but candidates must each be backed by more than half the members of a 1,200-strong “broadly representative nominating committee.”

Democracy advocates in the semi-autonomous Chinese city say this means Beijing will be able to ensure a sympathetic slate of candidates and exclude opponents.

“This is one person, one vote, but there is no choice. They have that in North Korea but you can’t call it democracy,” Democratic Party chairwoman Emily Lau told Agence France-Presse.

The pro-democracy group Occupy Central said it would go ahead with its threat to take over the city’s Central financial district in protest, at an unspecified date.

Hundreds rallied in a park outside the city’s legislature late Sunday chanting “No to fake democracy!” and blowing vuvuzelas.

“I am very sad,” Henry Chung, a 37-year-old scriptwriter, said. “We have waited so many years. But now we have nothing.”

Public discontent in Hong Kong is at its highest for years over perceived interference by Beijing, with the election method for the chief executive a touchstone issue.

“The principle that the Chief Executive has to be a person who loves the country and loves Hong Kong must be upheld,” said the text of the NPC decision, released by the official news agency Xinhua.

A vote by universal suffrage must have “institutional safeguards” to take into account “the actual need to maintain long-term prosperity and stability of Hong Kong,” it said.

The nominating committee will pick two to 3 candidates, it added.

“The Hong Kong leader must be a person who loves the country and the Party,” he said.

Leung Chun-ying, the city’s current chief executive who was picked by a pro-Beijing committee, hailed the NPC’s decision as a “major step forward in the development of Hong Kong’s society.”

“If we are willing, the majority of Hong Kong people, and that is some 5 million people eligible to vote, will no longer be bystanders in the next election,” he told reporters.

But Beijing’s plan to vet candidates caused dismay among democracy advocates who said it could not be considered genuine universal suffrage.

“There is no genuine choice. They (Beijing) will just give us one or two or 3 people they have chosen,” Lau told Agence France-Presse.

In an emailed statement, Occupy Central said: “All chances of dialogue have been exhausted and the occupation of Central will definitely happen.”

Activist leaders have said they intend to start with small acts of civil disobedience before launching wider direct action such as the mass sit-in to block Central’s roads.

A pro-democracy Hong Kong lawmaker broke down on live television after the NPC announcement, saying there was “no way out for Hong Kong.”

“This is the darkest and most painful day for Hong Kong’s democracy movement,” said a sobbing Ronny Tong of the Civic Party.

His colleague Claudia Mo told Agence France-Presse, “They’re turning Hong Kong into a bunker and they can do whatever they want, basically.”

“This is not universal suffrage, this is not democracy, it is about dictatorship, it’s about controlling,” he said. “We have no choice, we have to struggle and we have to fight back.”

Britain handed Hong Kong back to China on July 1, 1997 under a “one country, two systems” agreement, which allows residents civil liberties not seen on the mainland, including free speech and the right to protest.

Since then the city’s leader has been chosen by a 1,200 pro-Beijing committee. China promised a popular vote in 2017 but with strict curbs on candidates.

Pro-democracy protesters staged a mass march in July demanding a greater say over the choice of leader. The next month tens of thousands rallied against the Occupy Central campaign, in an event organized by the pro-government Alliance for Peace and Democracy (APD).

The pro-democracy movement has been strongly criticised by Beijing and city officials as illegal, radical and potentially violent.

State-run media on the Chinese mainland stepped up a campaign against the “extreme pan-democrats” in the run-up to Sunday’s announcement, alleging interference by foreign countries. – Rappler.com