More than half of Chinese see war with Japan – poll

Sep 10, 2014 2:13 PM PHT
Facebook Twitter Copy URL
Copied
A survey conducted in both nations found that 53.4% of Chinese envisage a future conflict, with more than a fifth of those saying it would happen 'within a few years' 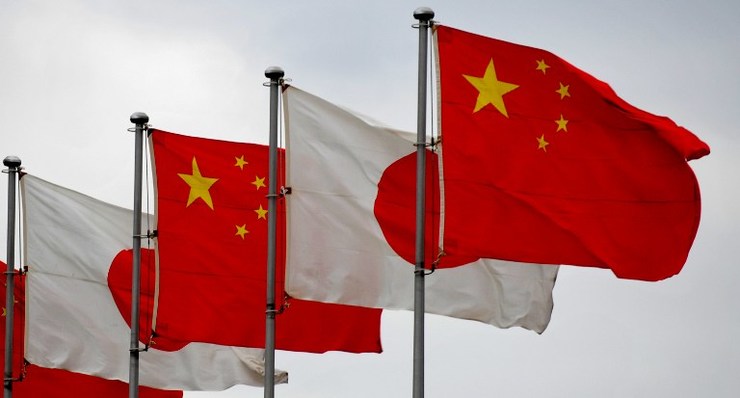 TOKYO, Japan – More than half of Chinese people think their country could go to war with Japan in the future, a new poll revealed Wednesday, September 10, after two years of intense diplomatic squabbles.

A survey conducted in both nations found that 53.4% of Chinese envisage a future conflict, with more than a fifth of those saying it would happen “within a few years”, while 29% of Japanese can see military confrontation.

The findings come ahead of the second anniversary Thursday, September 11, of Japan’s nationalization of disputed islands in the East China Sea that have formed the focus of tensions between the Asian giants.

Underlining the lingering row over the Tokyo-controlled Senkaku Islands, four Chinese coast guard vessels sailed into their territorial waters on Wednesday morning. China regards them as its territory and calls them the Diaoyu Islands.

The survey was conducted by Japanese non-governmental organization Genron and the China Daily, a Chinese state-run newspaper, in July and August.

It questioned 1,000 Japanese aged 18 or older and 1,539 Chinese of the same age range in five cities: Beijing, Shanghai, Chengdu, Shenyang and Xian.

In the annual opinion poll which started in 2005, 93.0% of Japanese respondents said their impression of China was “unfavorable,” worsening from 90.1% last year and the highest level since the survey began.

The percentage of Chinese who have an unfavorable impression of Japan stood at 86.8%, an improvement on 92.8% last year.

“The most common reason for the unfavorable impression of China among the Japanese public was ‘China’s actions are incompatible with international rules’ at 55.1%,” Genron and the China Daily said in a joint statement.

That was closely followed by “China’s actions to secure resources, energy and food look selfish” at 52.8%.

The third most commonly-given reason was “criticism of Japan over historical issues” at 52.2%, while “continuous confrontation over the Senkaku islands” came fourth place at 50.4%, it said.

“On the other hand, ‘The Diaoyu/Senkaku islands’ (64.0%) and ‘historical understanding’ (59.6%) were the two prominent reasons for the unfavorable impression of Japan among the Chinese public,” it said.

Despite a huge trade relationship and their deeply interwoven economies, relations between Tokyo and Beijing have seen several periods of deterioration over recent decades.

But ties have been particularly bad since late 2012 when Japan nationalized the Senkakus, a move it says was a mere administrative change, but which China says was a provocation.

Beijing regularly insists that Japan has not atoned enough for its imperialist past, and lambasts nationalist Prime Minister Shinzo Abe for an “incorrect” understanding of history and what it says is his intention to remilitarize.

For its part, Tokyo accuses Beijing of dwelling on the past for domestic political reasons and says that in the seven decades since World War II it has apologized repeatedly and trodden a pacifist path.

In an editorial, the China Daily described the poll as “worrying” and said for leaders in both countries “these findings should be concerning”.

“There is a need for a meeting between the leaders of both countries to reverse the deteriorating relations,” the paper said, but added: “the ball is in Japan’s court.”

“Abe needs to show Chinese leaders with his actual deeds that he is sincere about improving relations.” – Rappler.com