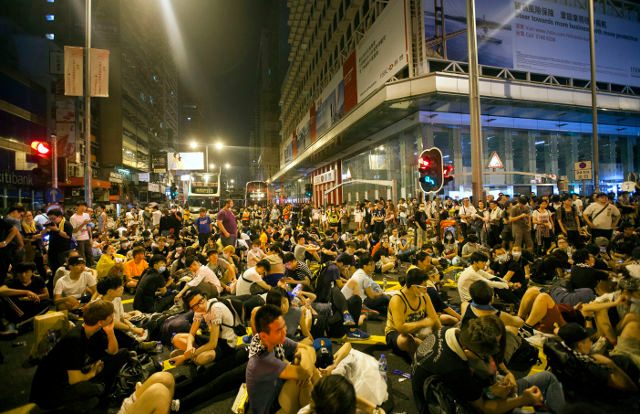 HONG KONG – Pro-democracy protests brought widespread travel chaos to Hong Kong Monday, September 29, with many schools and businesses shuttered but the city’s stock exchange said it would operate as usual.

As commuters tried to make their way to work, crowds of defiant demonstrators controlled a number of major thoroughfares and intersections in the heavily congested city. (LIVE BLOG: #OccupyCentral Hong Kong)

An Agence France-Presse (AFP) reporter on the scene in Mongkok – one of the most densely populated suburbs of the city and the site of a second protest across the harbour in Kowloon – saw angry confrontations between protestors and members of the public frustrated at the disruption.

The Transport Department said more than 200 bus routes were suspended or diverted while central sections of the tram network were also down.

The city’s underground rail service was largely unaffected but multiple station exits in the island districts of Causeway Bay and Admiralty — where many international businesses are located — were closed after protesters blocked them with barricades. Some exits at Mongkok were also blocked.

The Education Bureau said schools in the areas where protesters had gathered would remain closed with parents urged to “place safety as a top priority”.

The city’s stock exchange insisted it would continue to operate as normal but the Hong Kong Monetary Authority said 17 banks were forced to close 29 branches across the city.

Standard Chartered, HSBC Holdings, Bank of East Asia, the Bank of China and CITIC were among those who said their operations were affected by the protests.

The government also announced all committee meetings at the city’s legislative building, which has become a major gathering point for protesters, would be cancelled. – Rappler.com