Nov 10, 2014 4:39 PM PHT
Facebook Twitter Copy URL
Copied
Flags fly at half mast across the country and at Dutch diplomatic missions abroad ahead of a commemoration in Amsterdam 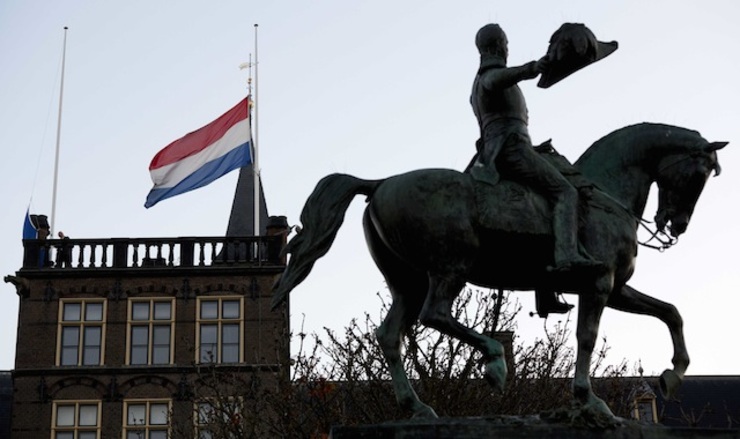 AMSTERDAM, Netherlands (UPDATED) –  The Netherlands on Monday, November 10, held a somber and emotional memorial for the 298 people who died when Malaysia Airlines flight MH17 was shot down over war-torn eastern Ukraine in July.

“What if the holiday had started a day later? What if the plane had been late? What if I wake up and realise it was all just a dream?” Prime Minister Mark Rutte told the memorial ceremony in Amsterdam, attended by 1,600 of the bereaved.

“But there is no what if? Only the harsh reality of 298 dead,” he told the ceremony, also attended by King Willem Alexander and Queen Maxima, as 298 large candles burned in memory of the victims, two-thirds of them Dutch.

“They will not be forgotten, the beautiful, warm and touching memories are forever,” Rutte said, with flags flying at half-mast around the Netherlands.

Many of those killed on the flight were children, starting their summer holidays on the doomed Amsterdam to Kuala Lumpur flight, and their classmates ceremoniously placed flowers among the candles.

Anton Kotte, who lost 3 relatives in the crash including his son, said the time since the disaster had been like riding a train that never stopped with the other bereaved.

“We didn’t know each other but we are partners in misfortune and we stare out the window,” said Kotte.

“Today the train has stopped, in Amsterdam. We have another chance to reflect. We wear white armbands with the words ‘We shall never forget you’,” he said.

Mourners from the different countries affected read out the names and ages of all those killed, in a ceremony broadcast live on Dutch television and radio, marked by musical performances by famous Dutch artists.

Gita Wiegel, 13, who lost her mother on the flight, said: “The idea that I wouldn’t see her for 4 weeks was awful, but this is so much more awful.”

“My mother wanted the best for me, and that’s why I go on with my life, for her. I want her to be able to look down on me from above and be proud of me.”

A trumpet rendition of The Last Post was followed by a minute’s silence.

Ukraine and the West say the Boeing 777 was shot down by separatist fighters using a BUK surface-to-air missile supplied by Russia, but Moscow strongly denies the charges, pointing the finger at Kiev.

So far 289 victims have been identified among body parts recovered from the site by a team led by investigators from The Netherlands but Dutch Foreign Minister Bert Koenders warned on Saturday, November 8, that some remains may never be recovered.

Five more coffins of remains as well as personal effects flew to the Netherlands on Saturday, where they are to be identified.

Experts from The Netherlands have made 4 trips to the crash site since a fragile ceasefire deal was signed in early September between rebels and government forces.

The visits come after international investigators were forced to halt an initial probe at the site in August due to heavy fighting.

A preliminary report by Dutch investigators in September found the jet was hit by numerous “high-energy objects.” – Rappler.com