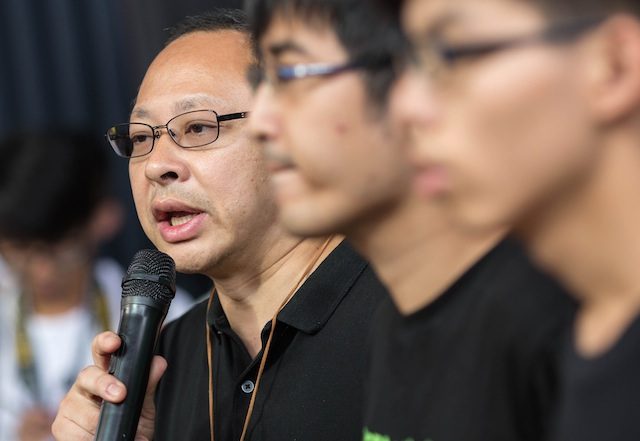 HONG KONG – A founder of Hong Kong’s pro-democracy movement branded the occupation of the city’s main roads as “high-risk” Friday, December 5, urging protesters to turn to new methods of civil disobedience to push for electoral reform.

Benny Tai, one of the three founders of the Occupy Central with Love and Peace movement, said the movement has now run its course and warned that protesters now risk further violent clashes with police if they stay in their camps.

“Occupation is now a high-risk, low-return business,” he said in an editorial in the New York Times, arguing that campaigners should instead turn to “acts of noncooperation” such as refusing to pay taxes.

“The occupation has won over as many Hong Kongers as it ever will, and we should consider new ways to convince the public that fighting for full democracy is in their interest.”

Campaigners have camped out on Hong Kong’s streets for more than two months to demand fully free elections for the southern Chinese city’s leadership.

China insists that candidates for the vote for chief executive in 2017 must be vetted by a loyalist committee, which demonstrators say will ensure the election of a pro-Beijing stooge.

The rallies for fully free leadership elections drew tens of thousands at their height, but numbers have dwindled as public support for the movement has waned and dozens have been injured in clashes with police as authorities have tried to clear the camps.

So far one of three camps established by the movement has been dismantled, and Hong Kong authorities are gearing up for more clearances next week.

Hundreds of pro-democracy protesters faced off with police over the weekend in a fresh escalation of tensions, with officers firing pepper spray and using batons on angry students trying to surround the government headquarters.

Tai and two other founding fathers of the movement – Chan Kin-man and Chu Yiu-ming – trio handed themselves in to police on Wednesday, December 3, in a symbolic move to end the occupation, but the different groups behind the movement remain split on how to proceed.

Student protest leaders have until now remained adamant that staying on the streets is their only option to force reform.

But a prominent leader from the Hong Kong Federation of Students, the group which led the mass rallies, said Thursday that students would decide “within a week” whether to leave the two remaining camps.

Tai added that using methods such as refusing to pay taxes or rents for public housing, and filibustering in the city’s mini-parliament may prove to be more effective than blocking roads.

“Blocking government may be even more powerful than blocking roads,” he said. – Rappler.com