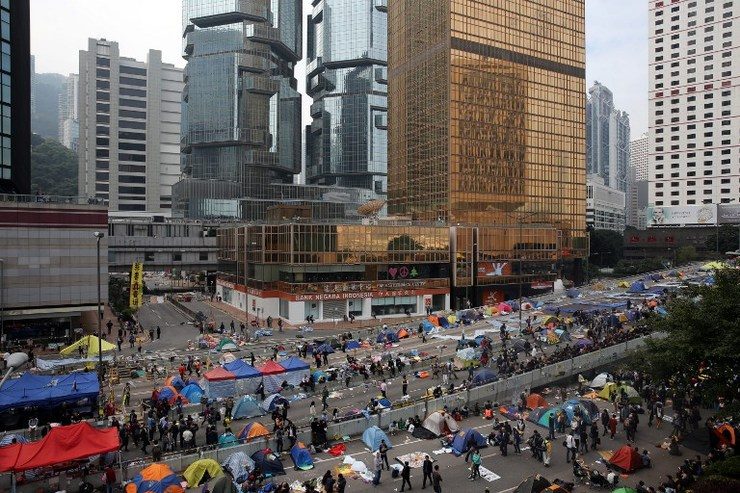 HONG KONG (4th UPDATE) – Hong Kong police swooped on the city’s main pro-democracy site Thursday, December 11, clearing away tents and barricades after more than two months of rallies, and issuing an ultimatum to a hardcore of protesters who have refused to budge.

Hundreds of police moved in from all sides of the Admiralty camp in the heart of the business district as a few hundred – including student leaders and lawmakers – remained in the center despite being ordered to leave or face arrest.

They were the remnants of what once numbered tens of thousands of people at the height of the protest movement, before public support waned. They shouted “Civil disobedience without fear” and “I want true democracy”.

The call for free leadership elections has underpinned the demonstrations, and protesters have vowed the clearance operation will not end a campaign they say has redefined the city’s vexed relationship with Beijing.

“This is not the end of the movement. The political awakening amongst the young is irreversible and we will fight on,” pro-democracy lawmaker Claudia Mo told Agence France-Presse.

Police had announced a “lockdown” after a 30-minute window in which protesters could voluntarily leave the site – an encampment of tents, supply stations and art installations sprawling along a kilometer of multi-lane highway through the Admiralty district.

Thousands gathered on Wednesday night, December 10, for one final mass rally at the site, but the numbers had dwindled by Thursday morning, leaving just a few hundred sitting in the road.

Before the police operation, bailiffs descended with cutters and pliers to take down barricades and load them into trucks to enforce court orders taken out by transport companies frustrated at the long-running disruption. 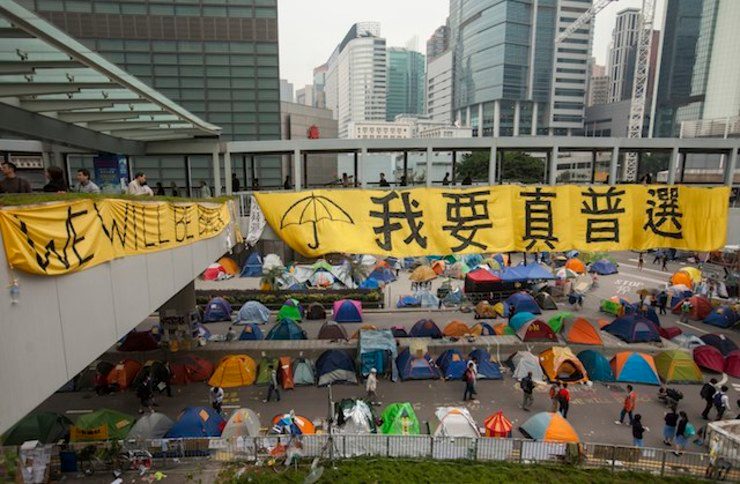 While many protesters had packed up their tents and left, others said they intended to stand their ground.

“I’m not tired (of the campaign). I’ll never be tired, only the government is tired,” said 19-year-old student Alice.

‘The start of something’

The Admiralty site has been the focal point of the protest movement since rallies erupted in September, after China’s Communist authorities insisted that candidates in Hong Kong’s 2017 leadership election will have to be vetted by a loyalist committee.

Protesters say this will ensure the election of a pro-Beijing stooge, and their struggle has highlighted a litany of frustrations in the former British colony including a yawning income gap and lack of affordable housing.

Some in Admiralty expressed a sense of failure, after the authorities in Hong Kong and Beijing refused to give any concessions on political reform, but said the occupation had changed Hong Kong for good.

“I feel sad because we haven’t achieved our mission, but I think there can be progress in the future,” said 23-year-old welfare worker Dubi. “I think it’s the start of something long-term.”

Media mogul Jimmy Lai, a fierce critic of Beijing, said he would stay at the site “until I am arrested”.

“Definitely you will miss the people you have spent over two months with, other than that we’re looking forward to the next one,” he said, referring to future actions for the movement.

Authorities had warned they would take “resolute action” against those who resist the clearance which they say is being carried out to restore public order and reopen roads to traffic.

There were fears that radical splinter groups will dig in for a final stand, following violent clashes outside government headquarters in Admiralty at the end of last month.

But many said they did not want a confrontation.

“I’ll probably leave just before the action because my job would be difficult if my name was recorded by police,” said a 29-year-old surnamed Chow who works for a civil society group.

Jacqueline Au, a 28-year-old finance worker, said: “For me, the protest has been a good thing.

“It’s a wake-up call for the government in China that it’s not that easy to impose the Chinese system in Hong Kong.” – Rappler.com