Love in a time of disaster: Moving on after the tsunami BANDA Aceh, Indonesia – Rusli Abdul Rahman and Fardhiah had been neighbors for years when the Asian tsunami devastated their small community in Indonesia’s Aceh, killing both their spouses and their 8 children.

But they found a second chance at happiness by remarrying each other and having a son – one of the many new families formed in the aftermath of a natural disaster that killed tens of thousands a decade ago.

Fardhiah, 50, who now lives in a house surrounded by photos of her lost relatives, said she grieved for months after the tsunami but then realized: “I must start a new life.

“Perhaps God saved me so that I could be useful to other people.”

The tsunami ripped apart the tightly woven social fabric in Aceh province, killing husbands and wives, sons and daughters, and forcing survivors together in ways that would have previously seemed unimaginable. 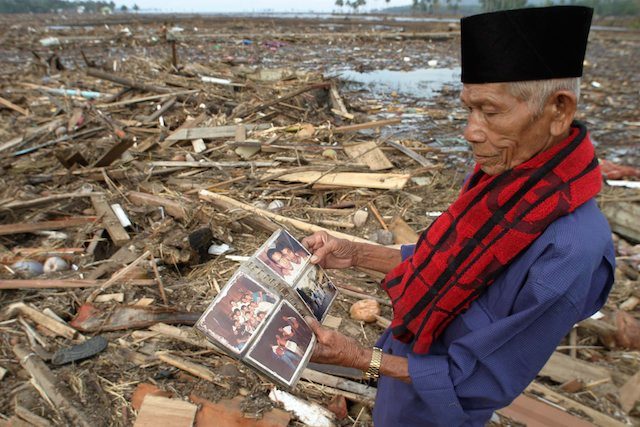 Almost 170,000 people were killed in Indonesia, the vast majority in Aceh, when waves up to 35 meters high flattened coastal communities following a monster undersea earthquake off Sumatra island.

In total, about 220,000 people were killed in countries around the Indian Ocean when the quake and tsunami hit on December 26, 2004.

Aceh, a decade on: Saved by a boat

Some, such as laborer Syukri, helped youngsters left orphaned by the disaster. While wandering desperately round shelters looking for his missing brother, he spotted an abandoned baby boy lying in the undergrowth.

“I saw him lying in the bushes, with a swollen stomach and head, and scabs on his body,” the 45-year-old told AFP.

He took him in and a decade later, the boy remains part of Syukri’s family with his other children and wife.

‘We have come so far’

Muhammad Zubedy Koteng, who worked with UNICEF on child protection in Aceh after the tsunami, said that forming new families was an effective way for many to “cure their trauma” and help them “deal with their loneliness and overcome the sorrow of losing their loved ones”.

But his case also illustrates how the trauma of the past can still come back to haunt people – it was only during a recent interview with AFP that Syukri revealed to his son that he was adopted.

“I have kept this a secret because I was afraid he might feel disappointed, but it’s time he knows the truth,” he said, as the youngster broke down in a flood of tears on hearing the news.

Other cases show that forming new families is not always straightforward, and they risk being torn apart if survivors somehow manage to find relatives who were thought to have been killed.

Raudhatul Jannah was swept away by the tsunami aged just 4 and was given up for dead by her family. But in August, she was spotted walking through a village by her uncle, and reunited with her parents. (READ: Reunited Acehnese family: ‘God brought us together’)

While her birth parents were delighted, the development meant that an elderly woman who had been raising her for the past decade was suddenly left without her adopted daughter. For most however, new additions to the family were welcome in the dark days after the tsunami when tens of thousands were forced into overcrowded shelters for months, often years, and had to rely on handouts from international aid agencies.

“At that time, we lived day to day and never thought we had a future,” said Anisah, who survived with her family, but then found herself with 3 extra mouths to feed when she took in her two teenage siblings and orphaned niece.

And the vast majority are grateful for the chance of a new start after such a devastating natural disaster.

“We have come so far,” said Wahidah, a 30-year-old housewife who remarried after her husband was killed.

“I just hope there won’t be another tsunami to take away our second chance at life with our new families too.” – Rappler.com