Jan 10, 2015 12:22 AM PHT
Facebook Twitter Copy URL
Copied
(4th UPDATE) The dramatic climax to the two stand-offs brought to an end more than 48 hours of fear and uncertainty in France 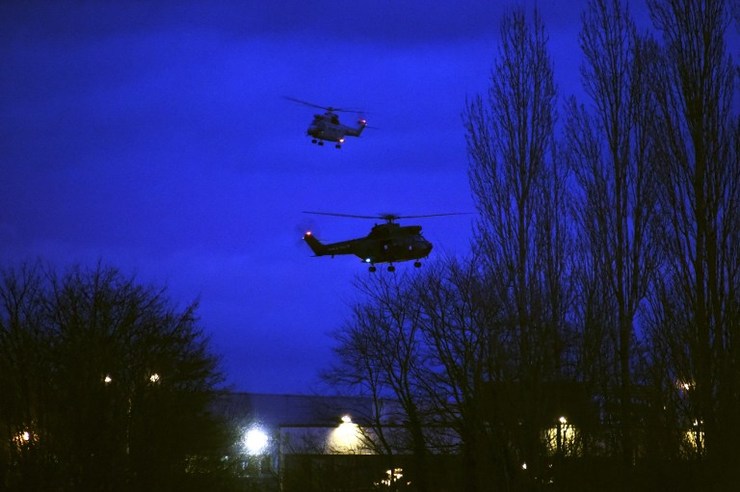 PARIS, France (4th UPDATE) – French forces killed the two brothers behind the massacre at Charlie Hebdo and an Islamist ally Friday, January 9, after three blood-soaked days that left 17 other people dead and shook the nation to its core.

Police were still hunting for another suspect, the girlfriend of one of the men, early Saturday, January 10, hours after the fiery showdown with the gunmen who had kept France on edge since killing 12 people Wednesday, January 7 at the offices of the satirical weekly.

The heavily armed brothers were cornered in a small town northeast of Paris while a third man took terrified shoppers hostage in a Jewish supermarket, where four died and seven were hurt including three police officers.

Explosions rang out at sunset at the two hostage sites as police moved in.

As France’s bloodiest week in decades drew to a close, the mood began to turn to one of grim national reflection.

President Francois Hollande said he would attend a march of unity in Paris on Sunday, January 11 expected to draw hundreds of thousands of people as well as the leaders of countries including Germany, Britain, Italy and Spain.

Questions were also mounting over how the three men – brothers Cherif and Said Kouachi, and supermarket gunman Amedy Coulibaly – had slipped through the security net after it emerged that all three were known to the intelligence agencies. 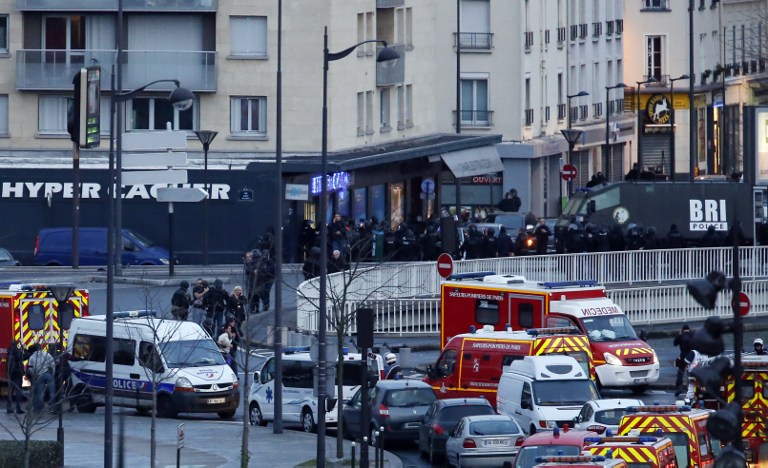 Coulibaly’s girlfriend Hayat Boumeddiene, who was wanted by police in connection with the killing of a policewoman on Thursday, January 8, was still on the loose.

With fears spreading in the wake of the attack, the United States warned of a global threat, telling its citizens to beware of “terrorist actions and violence” all over the world.

He described the attack on the supermarket as an “appalling anti-Semitic act” and said: “These fanatics have nothing to do with the Muslim religion.”

Hidden under sinks and in fridges

The Kouachi brothers were cornered in a printing business in Dammartin-en-Goele outside Paris Friday after a firefight with police that Paris prosecutor Francois Molins said left Said with a minor neck wound.

The brothers took the manager hostage, later releasing him after he helped Said with his wound, while a second man hid beneath a sink upstairs, said Molins.

The second man was able to text security forces information from inside the premises, a source said, and survived the assault unharmed.

The gunmen had a hefty cache of arms including Molotov cocktails and a loaded rocket-launcher.

One witness described a terrifying face-to-face encounter with one of the suspects, dressed in black, wearing a bullet-proof vest and carrying what looked like a Kalashnikov.

The salesman told France Info radio that one of the brothers said: “‘Leave, we don’t kill civilians anyhow’.”

As French elite forces moved into place around the building, with snipers deployed on roofs and helicopters buzzing overhead, a fresh drama was unfolding in eastern Paris with a hail of gunfire around lunchtime.

There, Coulibaly stormed a Jewish supermarket hours before the Sabbath, killing four shoppers and taking others hostage.

However up to five people – including a three-year-old boy – survived hidden inside a refrigerator for five hours, with police pinpointing their location using their mobile phones, prosecutors and relatives said.

Outside the kosher supermarket, an Agence France-Presse (AFP) reporter saw at least one body lying at the scene, where the sliding glass door of the shop was completely shattered.

“It’s war!” shouted a mother as she pulled her daughter away.

As the sun set shortly after 5:00 pm local time, the two Islamist Charlie Hebdo gunmen charged out of the building with guns blazing before being cut down.

Shortly afterwards security forces moved in on the supermarket, where Coulibaly had just knelt to do his evening prayer when the special forces struck.

BFMTV revealed police were able to exploit a lapse in his defenses as he had not hung up his phone after speaking to one of their reporters.

A security source told AFP he had also called friends from the scene urging them to stage further attacks.

Slipping through the net

Meanwhile, questions mounted as to how the three men could have slipped through the security net.

As the drama reached its climax, links emerged showing the brothers and Coulibaly were close allies and had worked together. 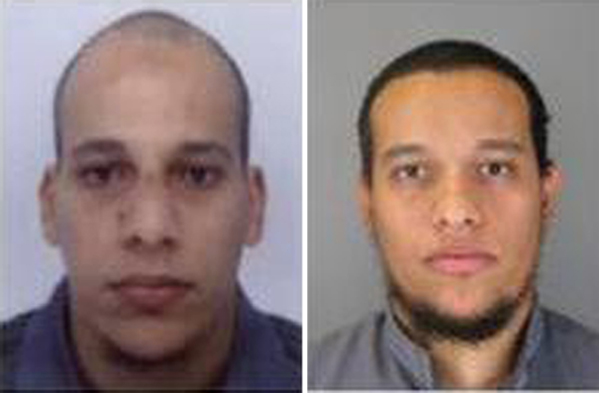 Molins, the prosecutor, said Coulibaly had “threatened to kill all the hostages” if police moved in on the Kouachi brothers, and he had said the supermarket was booby-trapped.

All three had a radical past and were known to French intelligence.

Cherif Kouachi, 32, was a known jihadist who was convicted in 2008 for involvement in a network sending fighters to Iraq.

His brother Said, 34, was known to have travelled to Yemen in 2011, where he received weapons training from AQAP.

It also emerged that the brothers had been on a US terror watch list “for years”.

Cherif told French TV he was acting on behalf of the Yemen-based Al-Qaeda in the Arabian Peninsula while Coulibaly said he was a member of the Islamic State group.

Coulibaly, 32 – who met Kouachi in prison – was sentenced to five years in prison in 2013 for his role in a failed bid to break an Algerian Islamist, Smain Ait Ali Belkacem, out of jail.

Prime Minister Manuel Valls said the carnage they left in their wake showed there had been “clear failings” in intelligence.

“It is better for you to stop your aggression against the Muslims, so perhaps you will live safely. If you refuse but to wage war, then wait for the glad tiding.”

‘We stand with you’

As the world rallied to France’s side, US President Barack Obama vowed assistance.

Some of France’s best-loved cartoonists, as well as two police officers, were killed at Charlie Hebdo, a magazine that infuriated Muslims by repeatedly published cartoons of the Prophet Mohammed.

The head of the country’s Muslim community – the largest in Europe – urged imams to condemn terrorism at Friday prayers.

Also on Friday, the mourning capital shone the words “Paris Est Charlie” (Paris Is Charlie) on the Arc de Triomphe monument, playing on the phrase “I Am Charlie” (Je Suis Charlie) that has taken center stage at rallies around the globe and featured heavily on social media. – with Valentin Bontemps in Dammartin-en-Goële, Agence France-Presse/Rappler.com